Paradise ponders, scallops and seam-ripper edition...  We had a bit of an emergency yesterday, with our cat Jahaer.  He had all the symptoms of an intestinal obstruction, which he's had before.  We got an appointment with a vet we've never seen before, in Logan, a referral from our usual vet (who was on holiday).  We got him down there, he was X-rayed, and sure enough there appeared to be an obstruction.  Downstream of the obstruction his intestines were empty except for gas, and they were very orderly instead of being a big jumble – suspicious to the vet.  Upstream of the obstruction the intestines were full of ... something.  At the junction would be the presumed obstruction, though it wasn't visible on the X-ray (as would be expected if the obstruction were a piece of plastic or wood).  The vet recommended surgery: to remove the obstruction if there was one, or to figure out what was going on if there wasn't.  We said go, and very shortly poor little Jahaer was under the knife.

Well, there was nothing that the vet could find blocking his intestines, but there was definitely some weird things going on.  His omentum had adhered in several places to his intestines, and that was why they were so orderly.  The vet cut all those loose.  Right where the obstruction seen on the X-ray was located, the omentum had adhered in a way that slightly kinked the intestine – so his working theory is that the kink (now removed) was the source of the problem, perhaps combined with something relatively inflexible that he'd ingested.  So the vet never cut into his intestines or stomach, which means that this surgery was relatively low-risk, and now he's recovering just fine.  The vet said the omentum's adhesions were likely the result of the surgery Jahaer had three years ago to save him from the consequences of eating a ribbon.  Hopefully this latest surgery took care of that; we'll know in a week or so.

At one point during the day we stopped at a dry cleaner's in Logan to drop off some stuff.  Debbie has a leather jacket that had big shoulder pads in it, and she was hoping their alterations lady would be able to remove them.  We gave the jacket and right then and there she opened a seam with an Xacto knife, yanked the pads out, and stitched the seam back up.  It was 15 minutes or so of skilled work.  When she was done, we asked what we owed her ... and she said “Merry Christmas!” and that it was a gift.  She refused any money at all.  We love this place! 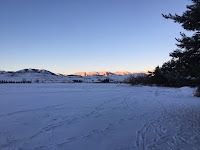 This morning dawned very cold – just 9°F on the thermometer, and it felt even colder than that.  The morning was sure pretty, though (at right).  I caught that just as the morning sun was illuminating the Wellsville Mountains to our west, but before the first rays touched the valley floor where we live.

Today Macey's had fresh sea scallops again, and I picked up two pounds of them for our dinner.  These things were rather large: just 17 scallops weighed in at 2.2 pounds.  Debbie made her signature broiled scallops dish: butter, lemon, garlic and dill on these luscious scallops.  I'm not sure what magic she uses to get the timing right, but for the last dozen or so times she's gotten it absolutely perfect.  Scallops are tricky: you want them cooked, but not to the point of rubber, and that gives you a window of time that's just seconds long.  There are are no instruments involved in Debbie's method – she just looks and pokes and somehow knows when to take them out.  Man, those were good!

Tomorrow morning I pick up our new Tesla Model X.  The original plan was for Debbie to drive me down in her truck, then we'd drive back separately.  She doesn't want to leave Jahaer for that long, though, so I called my friend and neighbor Tim D., and he's going to give me a ride down.  I suspect he'll enjoy taking a look at the Model X.  :)  I spent a couple hours this morning reviewing the training videos and manual.  Hopefully it won't be hard for me to get used to this fancy new thing, but it's truly very different than the pickups I've been driving for almost 30 years now...
Posted by Unknown at (permalink) 3:57 PM No comments: