Paradise ice...  Our trees are covered with sparkly ice this morning, as is our driveway.  The sun is shining brightly, though, so we're expecting this all to melt fairly quickly.  Meanwhile, here's a few photos for your enjoyment (click to embiggen, as always)... 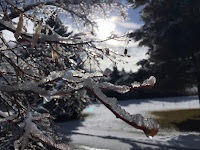 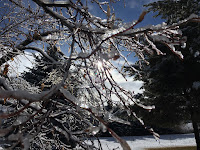 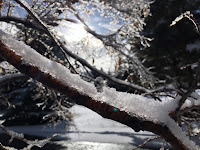 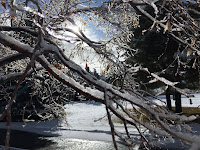 Pharmaceutical development ... is a very complicated thing.  Several things are simultaneously true, making it almost impossible for ordinary consumers to figure out what's going on:
There are some obvious avenues that could be taken to help with this problem.

One favored by progressives is to fund drug research with public dollars.  This, despite the fact that private pharmaceutical companies in search of profit out-perform every government institution that's ever tried their hand at drug development.  The CDC, in the U.S., is a great example.  While they've had a few successes over the years, the payback per dollar spent is trivial by comparison with what the pharmaceutical companies have done.  In my own opinion, this course is a recipe for failure.

Another approach favored by some in every part of the political sphere is to (drastically) reduce the bureaucracy and regulation around drug approval in the U.S.  Many schemes have been floated to do this.  The naysayers (and there are many) have one easy line to attack them all: some variant of “These reformers want to kill your kids!”  So far that line has stopped every attempt to reform the FDA's drug approval process.

Progressives have recently floated another proposal: to allow drugs to be imported into the U.S. much more freely (this is highly regulated today).  This would, in particular, allow the Indian generics to be imported.  This would rather dramatically change the financial equation for pharmaceutical companies with respect to financing drug development.  Only those drugs that were clearly novel under Indian patent law would then be attractive for financing.  Depending on who you want to believe, that's between 1% and 4% of all drugs currently being developed.  That's something to think about very hard before implementation.  One thing that scares me about that one: the immediate political consequences of such a program would all be positive.  All of a sudden, a broad range of drugs would be drastically cheaper.  The impact of shutting down the drug development pipeline might not be felt for 10 or even 20 years, so long is the development cycle.  That sort of decision, to a politician, is unfortunately a no-brainer: they're going to go for the short term benefit.

I certainly have no easy answers for this one.  It's an amazingly complicated problem that most people don't even think about.  A lot of people – especially younger folks – seem to think that drug development should be a government function, and the profit motive should be eliminated.  That notion scares me more than anything else, because all my own experience tells me that drug innovation would practically halt at that point.  Government bureaucracies are motivated almost entirely by factors that don't affect their success on their mission – the U.S. Post Office being the canonical example.  Private companies pursuing a profit, on the other hand, are motivated almost entirely by success in their mission.  I'll take the latter every time...
Posted by Unknown at (permalink) 7:56 AM No comments:

This morning I did something I should have done a long time ago...

This morning I did something I should have done a long time ago ...  I closed my LinkedIn account.  Everybody I care about knows how to contact me already, and I have no interest in (a) LinkedIn's unceasing efforts to trick me into giving them money, contact information, or my phone number, and (b) the mechanical queries from almost unbelievable numbers of recruiters who completely ignore my status of RETIRED.

So it's gone.  Back in the day I put quite a bit of effort into boosting my profile on LinkedIn, and I don't believe that effort ever paid any dividends at all.  The one and only value I can think of that LinkedIn actually delivered for me was that it let customers and prospects find me, back when I had a job where that mattered.

The world could use a good, transparent equivalent of LinkedIn.  One that wasn't annoying and grasping.  How that pays off I have no idea, but my intuition says there must be a way.  That's an opportunity for some entrepreneur who recognizes the incredible suckiness of LinkedIn today...
Posted by Unknown at (permalink) 6:13 AM No comments:

Snow in Paradise...  Our forecast for yesterday called for a half inch or so of rain.  Instead we got rain for a while, turning into slush, and finally into sloppy wet snow – about 2 inches of it.  Dang it!  We're hoping for a fast melt with the warmer temperatures forecast for the next five days.  But ... after that, the forecast has about an inch of rain followed by up to six inches of snow, over a four day period.  Double dang it!  We're ready for spring :)
Posted by Unknown at (permalink) 5:52 AM No comments: