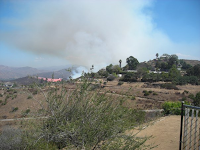 Here's a news article on the fire.  If it's accurate, the fire was started by someone burning brush (without a permit, of course).  Should this turn out to be true, I suspect the neighbors will be doing a bit of education on the culprit.

The fire was near Millar Ranch Road, which happens to be where some of my friends and co-workers live.  One of them (Aaron B.) took these photos from his yard.  In one you can see the fire plane dumping retardant; in the other you can see two fire planes flying by near his house.  Yikes! 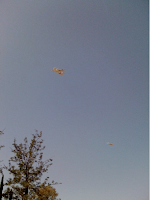 Aaron tells me that the fire fighters were right on it, with two planes, and two choppers.  I'm sure there were ground firefighters involved as well.  The news report says it burned 14 acres.  I'm not sure if it burned any of the wildife sanctuary in the vally north of Millar Ranch Road.

This map shows the approximate location of the fire.

According to KPBS, police had 94 closed between Steele Canyon Road and the bridge just north of Steele Canyon High School.  I drove through the area just after 2:00 pm, and it appeared the police were opening the road back up.  KPBS reported that there was a “small brush fire” but gave no further details.  I didn't see any fire personnel or aircraft, nor did I see any smoke (though it's a bit hazy today, so I might not have been able to see dispersed smoke).

Does anybody reading this know any more?  Please leave comments if you do...
Posted by Unknown at (permalink) 2:41 PM 2 comments:


We need to start limiting all U.S. politicians to two terms: one term in office and one term in prison.

Illinois already has begun that plan.


Essentially, this is a presumption of guilt on the part of politicians.

Sounds right to me!
Posted by Unknown at (permalink) 12:56 PM No comments:


A cowboy  appeared before St. Peter at the Pearly Gates. 'Have  you ever done anything of particular merit?' St. Peter asked.

'Well, I can think of one thing,' the cowboy offered. 'On a trip to the Black Hills out in South Dakota , I came upon a gang of bikers, who were threatening a young woman. I  directed them to leave her alone, but they wouldn't  listen.

So,  I approached the largest and most heavily tattooed biker and smacked him in  his face. Kicked his bike over, ripped out his nose ring, and threw it on the ground. I  yelled, 'Now, back off!! Or I'll kick the sh*t out of all of you!'

St. Peter was impressed, 'When did this happen?'

Posted by Unknown at (permalink) 12:44 PM No comments:

Via Jim M. (who seems to have a theme going here):


A man owned a small ranch near San Antonio.  The Texas Dept of Labor claimed he was not paying proper wages to his help and sent an agent out to interview him."I need a list of your employees and how much you pay them," demanded the agent."Well," replied the rancher, "there's my farm hand who's been with me for 3 years.  I pay him $200 a week plus free room and board.  The cook has been here for 8 months, and I pay her $150 per week plus free room and board.  Then there's the half-wit. He works about 18 hours every day and does about 90% of all the work around here.  He makes about $10 per week, pays his own room and board, and I buy him a bottle of bourbon every Saturday night.  He also sleeps with my wife occasionally.""That's the guy I want to talk to, the half-wit," says the agent."That would be me," replied the Rancher.

Posted by Unknown at (permalink) 12:42 PM No comments: 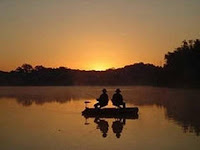 
Earl and Bubba are quietly sitting in a boat fishing, chewing tobacco and drinking beer when suddenly Bubba says,

"I think I'm gonna divorce my wife - she ain't spoke to me in over 2 months."

Earl spits, sips his beer and says, "Better think it over...women like that are hard to find." Shows us their true goals, that is: the elimination (by death) of all the “infidels” or their conversion to Islam.  The latest from Bekkay Herrach, a senior al Qaeda leader:


A senior al Qaeda leader has threatened to attack Germany just days before the nation will go to the polls to choose a new Chancellor.

Bekkay Harrach, alias Al Hafidh Abu Talha al Almani, resurfaced Friday in a chilling new video produced by al Qaeda's al Fajr Media Center and distributed across the major jihadi Web forums. Dressed in an ill-fitting black blazer, blue tie, and shoulder-length greased hair - looking more like a teenager dressed for his first job interview - he slammed Germany for its military presence in Afghanistan and warned that if Chancellor Angela Merkel is reelected on Sept. 27, Germany will be directly attacked.

His previous warning to Germany, on Jan. 17, 2009, coincided with a massive car bomb attack on the heavily guarded German embassy in Kabul that was orchestrated by the notorious Haqqani Network. Four Afghan civilians and an American soldier died in the attack.


Read the whole disturbing thing.
Posted by Unknown at (permalink) 12:34 PM No comments: