Hope and Change, Oh My!

Notice to All Employees

As of November 5, 2008, if Obama is officially elected into office, our company will instill a few new policies which are in keeping with his new, inspiring issues of change and fairness.

1. All salespeople will be pooling their sales commissions into a common pool that will be divided equally between all of you. This will serve to give those of you who are under achieving a 'fair shake.'

2. All hourly employees will be pooling their wages, including overtime, into a common pool, dividing it equally amongst yourselves. This will help those who are 'too busy for overtime' to reap the rewards from those who have more spare time and can work extra hours.

3. All top management will now be referred to as 'the government.' We will not participate in this 'pooling' experience because the law doesn't apply to us.

4. The 'government' will give eloquent speeches to all employees every week, encouraging its workers to continue to work hard 'for the good of all.'

6. The last few people who were hired should clean out their desks. Don't feel bad though, because President Obama will give you free healthcare, free handouts, free oil for heating your home, free food stamps, and he'll let you stay in your home for as long as you want even if you can't pay your mortgage. If you appeal directly to our democratic congress, you might even get a free flat screen TV and a coupon for free haircuts (shouldn't all Americans be entitled to nice looking hair?) !!!

If for any reason you are not happy with the new policies, you may want to think hard about your vote on November 4th.

Posted by Unknown at (permalink) 3:24 PM No comments:

Nobody denies that, in promoting himself from "community organizer" to the world's president-designate in nothing flat, he has shown an amazing and impressively ruthless single-mindedness. But the path of personal glory has been, in terms of policy and philosophy, the path of least resistance.

Peggy Noonan thinks a President Obama will be like the dog who chases the car and finally catches it: Now what? I think Obama will be content to be King Barack the Benign, Spreader of Wealth and Healer of Planets. His rise is, in many ways, testament to the persistence of the monarchical urge even in a two-century old republic. So the "Now what?" questions will be answered by others, beginning with the liberal supermajority in Congress. And as he has done all his life he will take the path of least resistance. An Obama administration will pitch America toward EU domestic policy and U.N. foreign policy.

Thomas Sowell is right: It would be a "point of no return," the most explicit repudiation of the animating principles of America. For a vigilant republic of limited government and self-reliant citizens, it would be a Declaration of Dependence.

If a majority of Americans want that, we holdouts must respect their choice. But, if you don't want it, vote accordingly.

Posted by Unknown at (permalink) 9:31 AM No comments:

About a week ago, I received a very spooky email – but it led to joy and celebration. You'll need some background to understand...

Over 30 years ago, I was in the U.S. Navy, on board the USS Long Beach (CGN-9). I was a Data Systems Technician, responsible for maintaining and repairing various components of the Naval Tactical Data System (NTDS) on board. Another guy on board (he shall remain unnamed to protect his privacy) was an Electronic Warfare technician. The two of us had a shared interest – microcomputers, the forerunners of today's PCs – and we became close friends, working together on many projects.

As the years passed, we both left the Navy, we started a business together, then went our separate ways. Through it all we remained friends and in contact, though sometimes it was many months between contacts. Then, about five years ago, my friend moved out of Southern California, to North Carolina – and after a couple of contacts I never heard from him again. My friend was a regular poster on several forums on the web, so googling his name got lots of hits – but after early 2003, no more forum posts. I got a bad feeling from this.

For several years, I'd occasionally undertake a fairly serious search. I've also had a “Google Alert” running on his name for years. One day about two years ago, I got a hit on the Google Alert – not a pleasant one, either, as it was an obituary in a Raleigh, North Carolina newspaper. The obituary didn't have enough information for me to be sure it was my friend. He has an unusual, but not unique, name. So I called the obituary editor (a very nice woman named Maryanne), and told her my story. She went out of her way to help me, including calling and interviewing the family of the dead man's wife. The details she got back matched – the man who had died was about the right age, had served in the Navy for almost 20 years, was an electronics tech of some kind, and had served on a ship based in San Diego.

I concluded the obvious. My friend had died. For the past two years I've lived with this conclusion, and have been sad about it on many an occasion.

Then last week I got my spooky email: someone with the name (or claiming the name) of my friend sent me an email inviting me to be a friend on his Facebook page. My first reaction was suspicion – that someone was playing a sick trick on me. So I wrote back, asking a question that only my friend could answer.

And he did. Since then, we've exchanged several emails and photos. It's definitely my friend, alive and well in North Carolina, married to his high school sweetheart, and sounding quite happy! 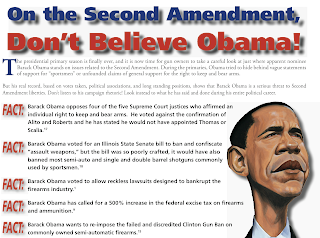 For anyone who (like me) cherishes the right of individual Americans to own firearms, granted by the second amendment to our Constitution, this is a sobering view of what might happen if Obama is elected with both houses solidly Democratic. There's still the Supreme Court to stop any such moves, but they've shown themselves to be less-than-reliable defenders of the Constitution in the past 20 years. Even more worrisome: a President Obama might well have a chance to appoint as many as 3 Supreme Court Justices, thus completing a leftist sweep of all three branches of our government.

The gun agenda Obama might have in that context is easily imaginable from the fact sheet at right. Much more detail (with lots of backing links) here.

Posted by Unknown at (permalink) 7:50 AM No comments: