I don't think this genie is going back in the bottle...
Posted by Unknown at (permalink) 4:50 AM No comments:

Posted by Unknown at (permalink) 4:45 AM No comments: 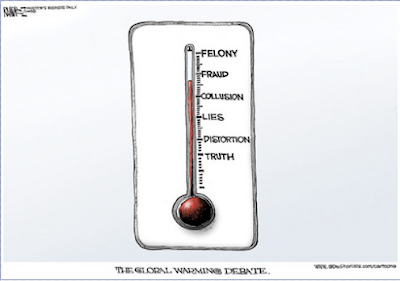 Google's index of unemployment-related searches just took a nosedive, falling from the highest levels of the year to the lowest levels in the span of a couple of weeks. I have no idea what would account for this, nor do I have any idea whether we should think of this as an optimistic omen. It will be interesting to watch this over the next few weeks to see if this was a leading indicator of something we'll see later in government statistics...
Posted by Unknown at (permalink) 4:22 AM No comments:

The trove of software code contained in the CRU hacker data dump has now had enough time to be analyzed by a good number of completely independent programmers, myself included.  You may recall that one of my reactions was to be appalled at the poor quality of the code.

I was not alone:


Up to this point, it was difficult to challenge the conclusions of AGW-believing climate scientists because most geeks don't have much expertise in climatology. We tend to consider ourselves scientists and to give other scientists in other areas of expertise the benefit of the doubt. Without a great deal of experience in climatology, it's hard for a geek to justify spending much time questioning the modes and methods of professional climate researchers.

However, the email leak has changed all this. Along with a hoard of emails, some source code for the computer climate models was also hacked and released to the public -- and the source code is an unusable mess. It doesn't take expertise in climatology to look at source code and determine that the code is garbage. There are many more geeks with software expertise than with climate expertise, and the geek community will go through every line of code and likely conclude that the computer models are so flawed that any conclusions drawn on them are without merit.

Despite the liberal tendencies of many geeks, I believe that the source code evidence will be insurmountable for most. Some will continue to cling to AGW because of a devotion to left-wing politics, but the majority of geeks will abandon their belief, and that abandonment by geeks will truly spell the end for AGW.


Read the whole thing here and here.
Posted by Unknown at (permalink) 4:15 AM No comments: