The highlight of today's drive was sighting two does and their fawns.  The two fawns were no more than a few days old, and quite possibly less than a day.  We were the first people up the Imogene Pass road from the Ouray side, and we saw quite a few deer and marmots – nobody had scared them off yet.  We didn't get close enough to those two fawns to take photos, dang it.  We actually got to see them twice – after the first time, I saw what direction they headed off in, and then found a road headed there.  After a few minutes drive, we came around a corner and there they were again!  This time, the doe took off at a rapid pace, and the little fawn bounded after her like an antelope.  It looked to Debbie and I like the fawn wasn't used to this mode of locomotion – it looked sort of like the fawn was saying “Whee!  Look what I can do, mom!”  But we could have imagined that...

We were on the road by 6:30 am, and saw nary a soul all the way up Imogene Pass (despite it being a long holiday weekend, and the presences of a bazillion four-wheelers in Ouray).  I guess most people just don't get up early.  My web research indicated that Imogene Pass was open, meaning that we could use it to get to Telluride.  I had planned out a nice loop, having us come back through Ophir Pass to the south.  But my web information turned out to be bogus: Imogene Pass was very much closed.  At right you can see the last plowed part of the road.  We were foiled by snow – a whole lot of snow!  I don't think this will be open while we're still here, dang it.

On the way back down Imogene Pass, still on the Ouray side, we began to meet people.  First a few, then more and more. We drove back on the northern-most fork of the road that connects Imogene Pass to Yankee Boy Basin road, and met some more people.  Then it began to rain.  As we drove up toward Yankee Boy Basin, it began to rain hard, and to hail.  Inside Yankee Boy Basin, it was like an L.A. traffic jam – jeeps and ATVs everywhere.  Pullouts that usually hold one or two cars had 7 or 8 cars parked in them.  On one memorable occasion, we watched one jackass park his jeep on the (narrow!) road, behind several other jeeps parked nose-in.  Then he and his wife walked down to use the outhouse nearby.  Meanwhile, vehicles are backed up in both directions as they shared what little remained of the road beside this obliviot.  By the time we got halfway through Yankee Boy Basin, Debbie and I were thoroughly irritated and ready to drive back home.  Oh, and I forgot to mention – the flowers in Yankee Boy Basin are still not in bloom.  And it was still raining and hailing.  Sheesh!

But if we could just forget the Yankee Boy Basin portion of our trip, today was actually very nice indeed.  Spectacular scenery, some flowers (but nothing like yesterday), lots of beautiful waterfalls, and great weather in the morning.  The rain doesn't bother us, though it puts a crimp in my photography.  The holiday crowds...that's another story.  We don't enjoy that at all.  Oh, well, just one more day of that!  Here are some more scenes from today's trip:

And the few flowers I managed to get today: 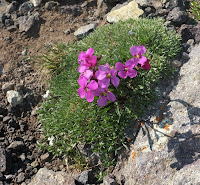 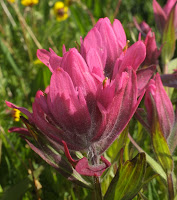 Posted by Unknown at (permalink) 3:37 PM No comments: