Salt-lick camera take...  All the usual suspects (deer, dogs, cats, and some old man walking a couple of field spaniel puppies), plus a fox (last photo) and Scott N. baling the hay on our field (and picking it up afterwards with his magical bale picker-upper):

Posted by Unknown at (permalink) 5:04 PM No comments:

Here's a pair of undated and unannotated photos taken at the same time that must be (from appearances) from the late '80s or early '90s.  I have no memory of the get-together that allowed this to happen.  I think these must have been taken on my parents' farm in Robbinsville, from the yard where our clothesline used to be (I think!), looking toward the east-northeast.  The left photo has (starting at the lower left and working clockwise) my brother Mark, my sister Holly, my brother Scott, and me.  Scott looks like John Denver in this photo, doesn't he?  The second photo has a more extended clan: Mark, his then-wife Rolana, Scott, Holly, Debbie (my wife), me, Amber (Holly's daughter, with arm outstretched), Tami, and Marci (next to Mark).  The last two are daughters of Mark and Rolana.  In that second photo is the clue that let me know where this was taken: a car zooming by on US 130, and a utility pole and wires running alongside it.

I love this photo!  On the back, in my dad's printing: “Tami + Marci trip with granma and granpa to tip of Schoodic Peninsula in Maine”.  That would be Schoodic Point, a place I remember very well from visits as a kid.  The lab dated this photo as August 1995, and that fits the apparent ages.  I like the way the fog there makes the others in the photo fade out, and keeps the girls in the foreground – and being photo-bombed by a seagull is pretty cool! 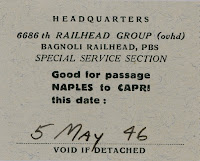 Here's something that isn't a photo, but an actual artifact: the half of a railway ticket from Naples to Capri, presumably taken by my dad when he was stationed near Naples, Italy during WWII.  I searched for information about the organization mentioned or the Bagnoli Railhead.  Other than simple mentions of their existence, I found nothing.  The date is interesting – it's just three months before my dad demobilized at Fort Dix, in New Jersey, and a year after the German surrender.  I hadn't really realized that my dad had over a year in Italy after the war ended.  I knew, from conversations with him, that he had traveled extensively all over Italy, especially along its west coast and the northern mountains (including one brief trip into Switzerland).  It seems he had plenty of time to do that! 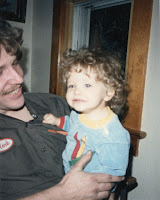 This is my brother Mark and his daughter Marci.  On the back, in my dad's printing: “Mark + Marci 1987”, and the lab dates it as November 1987.  Mark is wearing his “uniform” shirt from his days as an auto body repairman.  I believe he's in the house he lived in for a while, placed in our old field to the east of my parents' home on the farm in Robbinsville.  That house used to belong to my uncle Donald (my dad's brother).  Mark had it moved to a new location when my uncle sold his part of the farm.  I helped build that house the summers that I was 9 and 10 years old ('61 and '62), learning a lot about construction from my uncle.  His adopted son, my cousin Jonathan, wasn't interested in helping (which I was amazed at, because it was fun), and characteristically my uncle didn't force the issue.  Years later I found out (in conversations with my dad) that uncle Donald had an awful childhood – never measuring up, in his parents' eyes, to his older brother Earle.  He suffered through a lot of discipline and coercion, and vowed never to do the same with his own childhood.  The result was ... not good, but that's another story for another day...

I believe I've posted a lower-quality version of this photo previously, or one very similar to it.  I found a better copy, and here it is.  On the back, in my  mom's handwriting: “My wonderful Dad, at work in his nursery”.  This is a modern copy of an older original that I don't have (or at least, haven't found yet).  My grandfather looks a bit younger here than my memories of him, so I'm guessing this was taken circa '50.  The plaid shirt and cap are characteristic.  I don't recognize the field, but there aren't many visual cues here.

Here's another modern copy of an older original, and again I think I've posted something like this earlier, but not of this quality, so here it is again.  On the back, in my mom's handwriting: “Elinor & Bonnie Lee 1943”.  My mom would have been 10 or 11, and the war was raging in both Europe and the Pacific.  I don't recognize the house behind them, but I'm guessing it was the Highlands, New Jersey home that I believe her parents had at that time.  Bonnie Lee is my mom's younger sister, my aunt.
Posted by Unknown at (permalink) 12:01 PM No comments:

Paradise ponders...  Sat down at my computer this morning, started working, and then suddenly the keyboard stopped working.  After that I noted that my iPhone backup had an error (a weird one about backup file corruption).  After a little troubleshooting, I found out that my USB hub, which I've had for a couple years, has suddenly stopped working.  Worse, it appears to have taken out the USB hub in one of my monitors (the one it was connected to).  Bummer.  New hub is on order.  I have 11 USB devices plugged into my laptop; but now six of them are disconnected for lack of a port.  The rarity of outright device failures these days makes them stand out much more than such a thing used to! :)

Yesterday was very busy around the manor here.  Most of the day I was working with our builder and one of his helpers, putting in two of the new doors (so now, three down, one to go).  There were ... challenges.  The door from the mudroom into the house had to be shimmed oddly because the hole it was fitting into wasn't square.  The bigger challenge was for the new door from the sun room into our bedroom.  That one had a jamb that would have projected a couple of inches into our flooring – not what we wanted!  Fortunately it was possible (though not easy!) to remove about 3" of it.  That first photo below shows the process, which involved considerable force. :)  In the middle photo, our builder is cleaning up the old framing, which had about a bazillion nails, staples, and other unknown things projecting from it.  My job was to vacuum up the detritus.  The last photo shows that same door from inside the sun room, after they got it into the frame and shimmed into square.  Getting it in was a bit of a challenge, as the height of the hole was about 1/32" less than the height of the door.  Once again, force was involved.  The good news is that that door isn't going anywhere!  The 10" hole on the left of the door is there because the framed hole for the door was a non-standard width.  Rather than get an expensive custom door, we opted to get a standard size door and fill in the hole with wallboard on both sides.  That's our general approach when we run into something non-standard – if we ever have to replace this in the future, I'd sure rather be able to just buy a standard door! 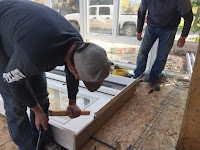 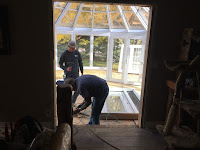 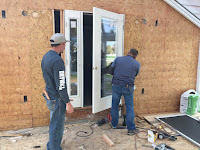 While the doors were being installed, a crew came out to insulate the mud room.  They did this by netting the inside of all the studs, then blowing in chopped fiber insulation.  This should have been the work of a couple hours, but their machine that chopped and blew the insulation broke down right in the middle of the work.  The two guys doing the work called their boss, who came running out to our place to fix the machine.  He disassembled it, fixed whatever the problem was, reassembled it, and tested it – only to find out that the 4" diameter, 100' long hose that delivered the insulation was plugged up somewhere in the middle.  The hose wasn't transparent, so they couldn't see where the problem was.  They did a nice binary search to find it – first cut the hose in half, discovered it was in the first half.  Cut that in half, discovered it was in the second quarter.  It took four cuts and they had a 6' long piece that they could see the plug.  They cleaned that out, taped the hose pieces back together with duct tape, and they were back in business.  An hour later, they were done.  I had a lot of cleanup to do in that room; a dusty, fibrous mess was everywhere! 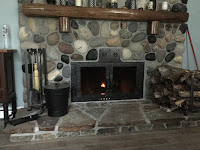 Last night we did something that was both extremely pleasant and oh so satisfying: we had a fire with our new fireplace doors!  It's the first time since we bought this house that we could have a “real” fire.  Everything worked perfectly.  There was no smoke leak, not even the tiniest amount.  The warm air system worked like a champ.  Best of all, we now have the ability to regulate the fire all the way from blast furnace to nearly off.  I was able to adjust the air input so that we had a nice fire that lasted almost two hours with a single loading, instead of the 15 or 20 minute bonfire we've gotten used to with the intense draft our chimney draws.  We're really going to enjoy having this!
Posted by Unknown at (permalink) 8:48 AM No comments: