Feeling much better today...  I'm not real happy about how long it's taking me to get over this bug, but still ... getting to the end is a good thing.  My fever is almost gone this morning (99.1°F, where my normal temperature is about 98.4°F), and noticeably more brain cells are functioning. :)  Better yet, I made it to 4:30 pm still feeling pretty good.  It sure will be good to see the back side of this bug! 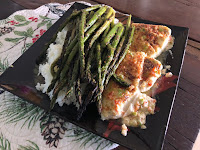 This afternoon Debbie made us a spectacular meal, real brains-fall-out-onto-the-table sort of fare.  The entree was fresh halibut (from our local Macey's!), the first of the Alaskan season.  Debbie found a recipe she liked, then tweaked it, and produced a masterpiece.  The fish was baked sans sauce first, then slathered with the sauce and broiled for a few minutes.  That sauce, oh that sauce!  It contains (amongst other things) mayonnaise, butter, Parmesan cheese, green onions, and Peppadew peppers.  The combined flavors were just wonderful.  The broiled asparagus and steamed sushi rice are standard fare for us, but a delicious accompaniment to the halibut nonetheless.  It was just stunningly good...

This meal got us to pondering (once again) just how much better we're eating here than we were in San Diego.  I still don't really understand why, but the fact is that our ordinary grocery store here (Macey's) has more and better fresh fish, at quite reasonable prices, than we could get in San Diego at any price (and you can pay a lot for fresh fish down there).  The variety isn't quite as large, and certain things are harder to find (lobsters, for instance) – but that's more than made up for by the frequent availability of things we love but could rarely (if ever!) get in San Diego.  Probably the best example of that is fresh giant sea scallops, 5 to 8 to the pound, available here two or three times a month.  It's not just seafood, either – the same store routinely carries several cuts of prime beef.  We're practically addicted to the prime ribeye steaks, which are every bit as good as the best we've ever had in a restaurant.  The produce is abundant, fresh, and (in season) locally sourced.  I can't say the tomatoes are New Jersey quality, but just about everything else (today's asparagus, for instance) is first rate.  We've mentioned our milk before, but it's worth repeating: we get our milk delivered weekly, and it is the best commercial milk we've ever had.  It's high butterfat (9%) whole milk, not homogenized, and low temperature pasteurized.  We each had a glass with our dinner tonight.  And then there's the ice cream, from Aggie's Creamery, part of Utah State University's agricultural department.  I'll be having some chocolate tonight, as an ice cream soda made with plain Pelligrino sparkling water (I like my ice cream sodas unsweetened – no syrup!).   It's the best ice cream I've ever had out of a store, and it's everywhere here.  It's so good that the incentive to make our own ice cream is much reduced.  Why is the food so much better here than it was in San Diego?  I'd love to really understand that, but surely it has something to do with choosier customers.  It doesn't really matter, though –  it's more than enough just to be able to enjoy it...
Posted by Unknown at (permalink) 3:57 PM No comments: