Paradise ponders, wifely hardware removal, impossible niceness, the return of the Internet, and great big smiles edition...  Today Debbie had a planned surgery to remove the hardware that was inserted last year to hold her knee together while it healed.  The surgery was a relatively minor one; she spent less than 45 minutes in the operating room.  It's hard to imagine how it could possibly have gone any better.  The surgeon reported zero complications, he saw that her bones were healing very nicely, and he found exactly what he suspected has been causing Debbie's pain when she exercises: two “protuberances” poking into a tendon, one from the hardware and one from a bony growth.  He pulled all the hardware out, filled in some of the screw holes (the ones near her tibia plateau), and filed off the bony growth.  She's now all nice and smooth under that troublesome tendon.  She's also lighter by the amount of the hardware removed (the photo at left) – more than I was expecting!  That fancy plate is quite heavy all by itself.  The photo at right is a not-too-wonderful duplicate of the X-rays her surgeon took during the surgery.  The upper right one shows the injector he used to squirt cement into the screw holes. 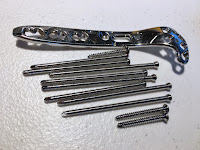 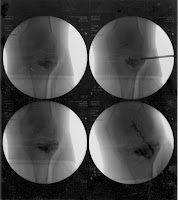 For this surgery we were at Cache Valley Hospital instead of the Intermountain Regional Hospital we usually go to.  This was at the surgeon's request; he prefers their operating facilities.  We've been there just once before, for an emergency room visit shortly after we moved here.  We were impressed by the ER staff at the time, but the insurance we got for the following year didn't have Cache Valley hospital as part of their network, so we didn't go there.  Our insurance this year includes both hospitals, so we accepted the surgeon's preference.

If you've been reading this blog for a while, you likely remember how impressed we were with the staff at Intermountain Regional Hospital.  Like most other people here, they were friendly and warm – and competent.  Well, Cache Valley Hospital, I have to say, managed to top even them.  There are so many little ways they made this visit easier; I could be here listing them for hours.  I'll just mention two that jumped out at me.  In the outpatient surgery intake room, the patient's chair was an overstuffed recliner – extremely comfortable, and very comforting for Debbie.  In both the intake area and in the recovery area, there are people whose entire job consists of running around to all the patients there to make sure they're ok.  Drinks, snacks, blankets, pain meds, a cheerful conversation – whatever is needed to make the patients less anxious and more comfortable, that person was right there every 60 seconds or so to make sure it happened.  This is so incredibly different than our experiences in San Diego that I am having trouble finding the words to describe them.  Our entire experience there today was a series of pleasant surprises.  Have you ever had a hospital experience like that?  I certainly hadn't!

There's one other thing about the hospital that I can't fail to mention.  When we scheduled the surgery last week, most of the collection of information was handled over the phone (very convenient, that was!).  Shortly after we finished with that, I got a call from someone in accounting in the hospital.  They'd noted that the entire cost of this surgery would be less (much less, actually) than our insurance deductible – so the entire cost would be out-of-pocket for us.  The hospital made us an offer: if we'd prepay the cost at their fixed rate, they'd give us a 10% discount on their cash rate (lower than the rate they bill insurance companies).  Now I'm sure that makes good business sense for them, as they'd get their money right away and without risk.  But obviously, since we have the money available, it makes good sense for us, too.  I happily took that offer – but I'm delighted that the offer was voluntarily extended.  Someone's on the ball there, identifying a nice win/win for both the hospital and its customers.

On the way home from the hospital today, I asked Debbie if she'd like to pick up something to eat.  She asked for soup (today is beef soup day!) from Los Primos.  We stopped there and Debbie waited in the car while I ran in to pick up that soup.  I placed my takeout order with a young man who's served us several times before.  He asked why weren't eating in the restaurant, so I told him about Debbie's surgery.  That brought a young woman (who has also served us many times) over to join the conversation.  When I got to the part about Debbie requesting the soup, there were two of the biggest, brightest smiles I've ever seen – and I swear the room got considerably brighter.  The two of them scurried off to the kitchen to make sure I left with the best selection of beef and vegetables in the soup.  So sweet!

Yesterday our Comcast technician (a fellow named Tony) came out to our house, exactly as promised (even well within the window they'd said).  Tony was bright, well-equipped with test gear, and had his brain fully engaged during his entire time here.  He actually listened to what I had to tell him, and upon hearing the symptoms agreed that this couldn't be a cable modem problem.  He didn't waste any time getting to a short list of three likely sources of the problem: a bad cable distribution amplifier, a bad connector in the interior wiring, or a bad underground service cable.  That list is in his order of likelihood.  We tested the amp first, and it was fine (and we had a great signal there, so that also eliminated the third possibility).  We located the cable leading from the amp to the office where we have the modem located, and a nifty little tester he had quickly told us there was an intermittent problem in that cable.  It turned out to be the connector behind the wall plate in Debbie's office.  In five minutes Tony had that replaced.  Then he noted that it was a crappy connector (I'm sure installed by our house's previous owner), so he checked all the other connectors in that cable.  Two of them were similar crappy connectors, so he replaced them too.  Then we logged into my cable modem and checked signal levels: rock solid, and 6db stronger than I'd ever seen.  So we did a speed test, and it was about 50% higher for download and 100% higher for upload (compared with previous tests I'd done).  The visit was at no cost to me.  I can't think of any way Tony could have done a better job. If Comcast manages to keep this up (and assuming the same sort of thing is happening everywhere), they just might manage to turn around their worst-company-in-the-universe reputation!