If you get caught in the rain without an umbrella, is it better to walk or run to a dry place?

This is a surprisingly difficult question to answer – but physicists have finally done it.
Posted by Unknown at (permalink) 4:44 AM No comments:

It looks like scientific publishing is about to undergo a revolution, and it will probably look a lot like what arXiv has done to physics...
Posted by Unknown at (permalink) 4:42 AM No comments: 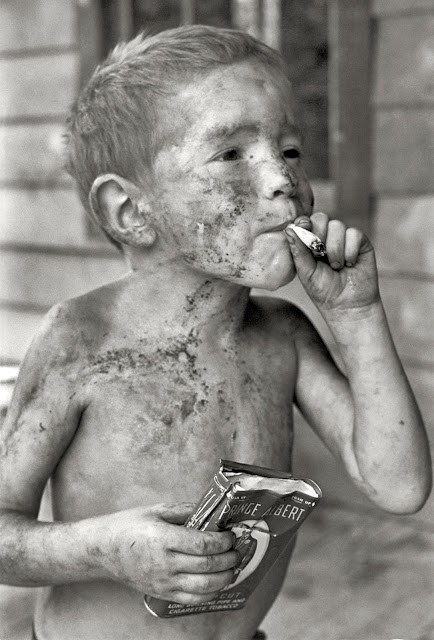 One of the Cornett boys, from Leatherwood, Kentucky in 1964.

One hopes this is not happening today, especially in America...

Via Shorpy...
Posted by Unknown at (permalink) 4:41 AM No comments:

I don't think Obama has heard the end of this... 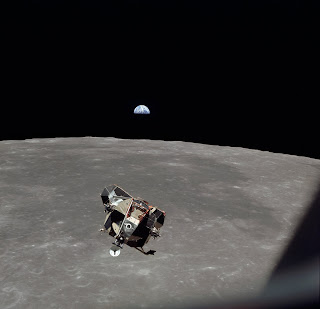 Those of us who have reached a certain age are likely to remember one thing about the eventful summer of 1969 above all others: Apollo 11.

I was nearly 17 that summer, and for the days (which seemed like months!) of the mission, I was completely consumed with it.  There was no Internet back then, and the TV news only had an hour or so per day of actual content.  My best source was the BBC News from London, which I picked up on a ham radio receiver.  The BBC had a flock of reporters on the story, all over the world; they did an amazing job of in-depth reporting, making the American news look just plain amateur by comparison.

For me, the most tension-filled moment of the mission is the one captured in the image above: the Lunar Module's ascent and rendezvous with the Command Module in lunar orbit.  Three men, a quarter million miles from home, meeting up in the unbelievable vastness of outer space.  It seemed such an unlikely feat, and yet they not only pulled it off, they made it look easy.

By the way, there was a slide rule along on that mission – and it was used :-)

The Atlantic has a nice collection of Apollo 11 photos...
Posted by Unknown at (permalink) 4:35 AM No comments:

Via reader and colleague Doug S., this little story about the Marine Corps' response to PETA demonstrations outside the Marine base at Camp Pendleton (just north of San Diego).  PETA is protesting the Marine's use of the terms “leatherneck” and “wooly-pully”.  Most of us would just shake our heads in amusement at PETA's antics – and hope the demonstration would escalate to one of PETA's trademark nude protests.  The Marines, however, responded in a slightly different manner:


PETA protesters turned to what they called their only defense. Using out-of-tune acoustic guitars, the crowd sang songs of animal triumph over human oppression.

Both civilian and military police worked together to break up the melee because no one could stand the horrible PETA music any longer.

Peace talks have started, with top Marine brass explaining that leather hasn’t been used around the neck of a Marines uniform since long before PETA existed. Former CENTCOM Commander General James Mattis also joined in the discussion, saying that the protestors “should just go fuck themselves.”

We San Diegans are very fond of our Marines, for many reasons. One of those reasons is the Marines propensity for straight talking.

You tell 'em, General Mattis!
Posted by Unknown at (permalink) 4:25 AM No comments: