Tonight the moon is just over half full, and as I walked the dogs (6:15 pm local time) it was nearly straight overhead and shining bright in a clear sky.  I glanced up at it while I was walking, and noted that there is a bright star quite close to the moon – less than one lunar diameter away, towards the northeast.  A star that appeared that bright, that close to a bright moon, almost surely was a planet.

So when I brought the dogs in, I grabbed our binoculars and walked back outside to check.  Sure enough, that's Jupiter shining brightly so close to the moon.  I couldn't see any surface features in the binoculars, but I could make out three moons of Jupiter, all in a row (from my perspective) – a giveaway that it is Jupiter.

I'm surprised this conjunction wasn't mentioned on any of the web sites I frequent.  I can't remember a closer conjunction between those two bodies.  With a little googling, I found this press release:

On Monday, January 21st, the Moon will appear amazingly close in the sky to the largest planet in our solar system, Jupiter. The Waxing Gibbous Moon - the lunar phase between first quarter Moon and a full Moon - will be approximately one degree south of Jupiter appearing to be only a pen width apart. This will be closest conjunction between the two celestial bodies until 2026.

By good fortune, the Great Red Spot will be traveling across the middle of Jupiter's disk during Slooh's live broadcast.

If skies are clear, individuals can view the conjunction by looking at the Moon and finding the brightest star in the sky next to the Moon, which will be Jupiter. Individuals with binoculars or telescope may capture more detail of Jupiter, including some of the satellites.

Looks like I caught it perfectly, even if by accident!
Posted by Unknown at (permalink) 6:52 PM No comments:

Who Lopped the End Off My Graph?

You'd expect a solar intensity graph, taken over the course of a day, to show half a cycle of something approximating a sine wave.  Solar luminosity at any given moment is mainly proportional to the cosine of the sun's elevation in the sky.  There's a little extra attenuation when the sun is at lower elevations, as there's more air for it to travel through – and if the air is dirty, much light will be absorbed by the dust and other particulates.  Out here, though, the air is really clear.  So why does today's solar intensity graph look like this?

From about 9 am to 4 pm, the graph looks like what we'd expect.

Before 9 am, it's just chopped off.  The reason is straightforward: before 9 am, from the vantage point of the weather station the sun is blocked by Gaskill Peak (one of the mountains forming Lawson Valley's eastern rim).  At 9 am the sun rose over Gaskill Peak, and the intensity jumped to right where you'd expect it.

After about 3:45 pm, the graph gets all squiggly.  That's happening because at that time the sun is approaching the horizon (again, from the weather station's perspective), which right there is formed by some chaparral brush.  You're seeing the light from the sun being attenuated by highly variable shadows of the chaparral's leaves and branches – perhaps even being moved around by the wind.

To get a really pretty graph, we'd need to have the weather station up on top of a local peak, with clear views to the horizon where the sun sets and rises (of course this would change throughout the year).

We only had seven and a half hours of bright sunlight today...
Posted by Unknown at (permalink) 4:54 PM No comments:

How Quickly We Forget... 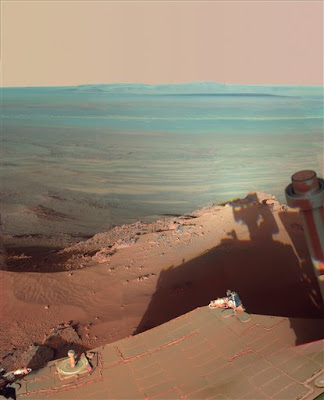 It's been nine years ago this week:


Opportunity, NASA's other Mars rover, has tooled around the red planet for so long it's easy to forget it's still alive.

Some 5,000 miles (8,000 kilometers) away from the limelight surrounding Curiosity's every move, Opportunity this week quietly embarks on its tenth year of exploration—a sweet milestone since it was only tasked to work for three months.

Designed for three months of operation, but here we are 108 months later and Opportunity is still going strong, and still returning good science.  An astronaut wouldn't have lasted quite so long :)
Posted by Unknown at (permalink) 5:08 AM No comments:

This isn't an actual movie taken by a video camera, but rather a simulation of a movie constructed from data taken from instruments on the Huygens probe that landed on Saturn's moon Titan in 2005.  It's a marvelous visualization of that technical triumph.  From APOD, of course...

Posted by Unknown at (permalink) 5:02 AM No comments:

In 774 or 775 AD.  Researchers figured this out by examining some ancient cedar trees in Japan.  A new theory is that colliding black holes in the Milky Way galaxy caused it.

What interests me most are the effects of this irradiation on life.  Did the number of radiation-induced mutations jump?  Did this irradiation have any observable consequences?  I've read of several studies that are underway trying to figure this out, but it will be tough – in general, one can't determine what caused a mutation.  Probably the closest anyone will come to actual proof is if they can demonstrate that a statistically significant increase in the number of mutations occurred at the time of this large radiation dose...
Posted by Unknown at (permalink) 4:59 AM No comments: 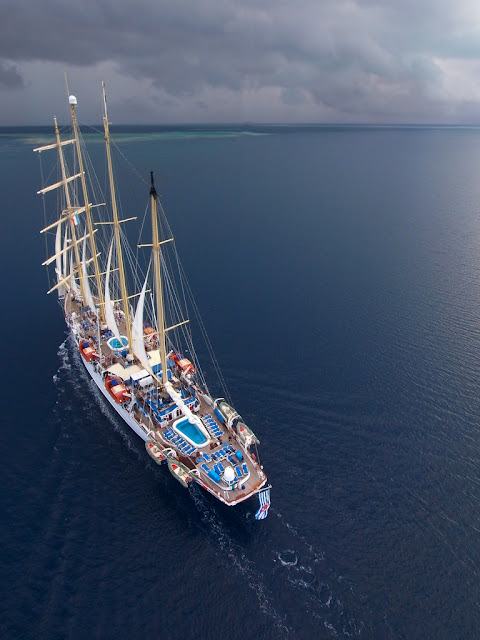 But not from airplanes, and not from balloons.  These photos were taken by cameras mounted on kites!
Posted by Unknown at (permalink) 4:53 AM No comments:

The experiment: First, soak an ordinary tennis ball in gasoline (what the British call “petrol”).  Then set the tennis ball on fire and whack it with a tennis racket.  What happens?

Not what I expected:

Cross dressing, meth selling, sex toy store owner, sex in the rectory – naturally, we're talking about a Roman Catholic priest.  Really.  The criminal complaint is online there.
Posted by Unknown at (permalink) 4:46 AM No comments:

There were some very strange and tragic stories in the 20th century, amongst them the paranoia of Albania that led to the construction of three quarters of a million concrete “mushrooms” (bunkers):

Posted by Unknown at (permalink) 4:42 AM No comments: