How much damage can one president do?

How much damage can one president do?  If this is true, then quite a bit.  And if it's true, I hereby apologize profusely to all the Israelis I know (and some whom I call friend).  Whilst hanging my head in abject shame.

A sad thought: the fact that I don't immediately dismiss this as twaddle tells you all you need to know about the depths of my despair over the future of my country...
Posted by Unknown at (permalink) 11:52 AM No comments: 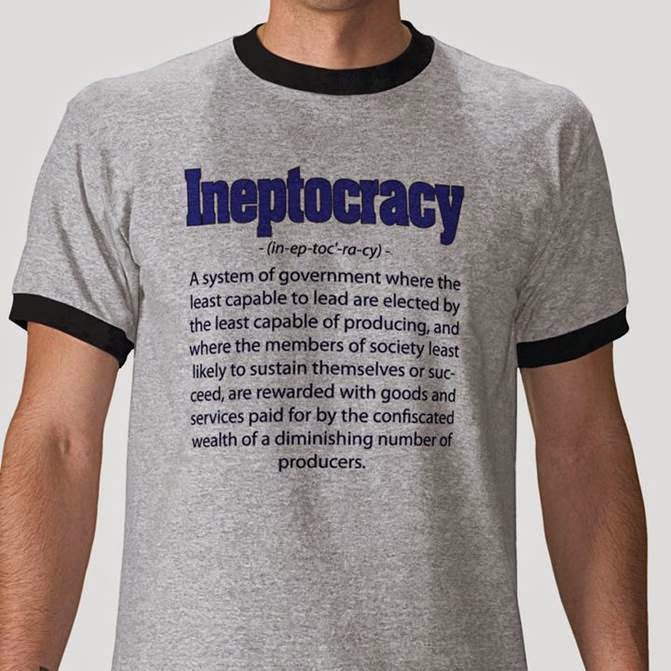 The Oxford English Dictionary (OED) doesn't have an entry for ineptocracy.  Googling it shows 105,000 hits, though – so someone is using it – and it will probably be in the next edition of the OED...
Posted by Unknown at (permalink) 6:56 AM No comments:

Morning ponder...  Is this a good idea, a bad idea, or a great idea?  I'm still thinking about it...
Posted by Unknown at (permalink) 3:14 AM No comments:

Rank web sites by “truth” in search results?  Google is allegedly working on a new way to rank web pages, replacing the current links based ranking with one based on a judgment about the accuracy of a web page's contents.

I can imagine this working well for a limited set of web page content – those pages for which an actual objective truth might be determined.  For example, suppose you had web pages whose entire purpose was to provide the result of 2 + 3.  I'd have no problem with web pages giving the answer 5 being ranked higher than others.  That makes sense.

But what about those web pages – the vast majority of them – for which there is no objective truth?  The first example that came to mind was a political web site extolling the virtues of one candidate over another.  Should the web pages favoring one candidate be ranked higher than others, because of some algorithm's determination of truthiness?  The linked article suggests that the algorithm uses a combination of “authoritative” sources and majority opinion to determine truthiness.  That strikes me as a very bad idea, and one subject to manipulation by devious activists.  We wouldn't see any of those in politics, would we?

The dependence on majority opinion strikes me as particularly pernicious.  This would have the effect of stifling dissident opinion across a wide range of topics.  For example, in the debate over global warming, the web pages expressing skeptical opinions would be ranked low (and would therefore be less often visited).  Similarly, the web pages claiming sightings of UFO on Mars would be ranked low, as would pages offering minority views on dietary guidelines.  In all cases, the pages comporting with majority views would be at the top of search results – and in today's world, that would tend to regeneratively bolster that majority view.  Debate and dissonance is vital in our human society, and I'd hate to see anything emerge from the Internet that would discourage it.

I think the right thing for Google to do with this algorithm is to offer it as an optional feature, one that the user has control over...
Posted by Unknown at (permalink) 3:01 AM No comments: