Six bills the new GOP congress should pass...  Glenn Reynolds (aka “Instapundit”) has six great choices that I'd support.  I won't hold my breath for any of them, though.  I suspect (4) is the only one that could possibly garner enough political support to even be proposed.

I haven't picked up a copy of USA Today for about 20 years.  I'm astonished to find this column in that publication...
Posted by Unknown at (permalink) 5:45 AM No comments: 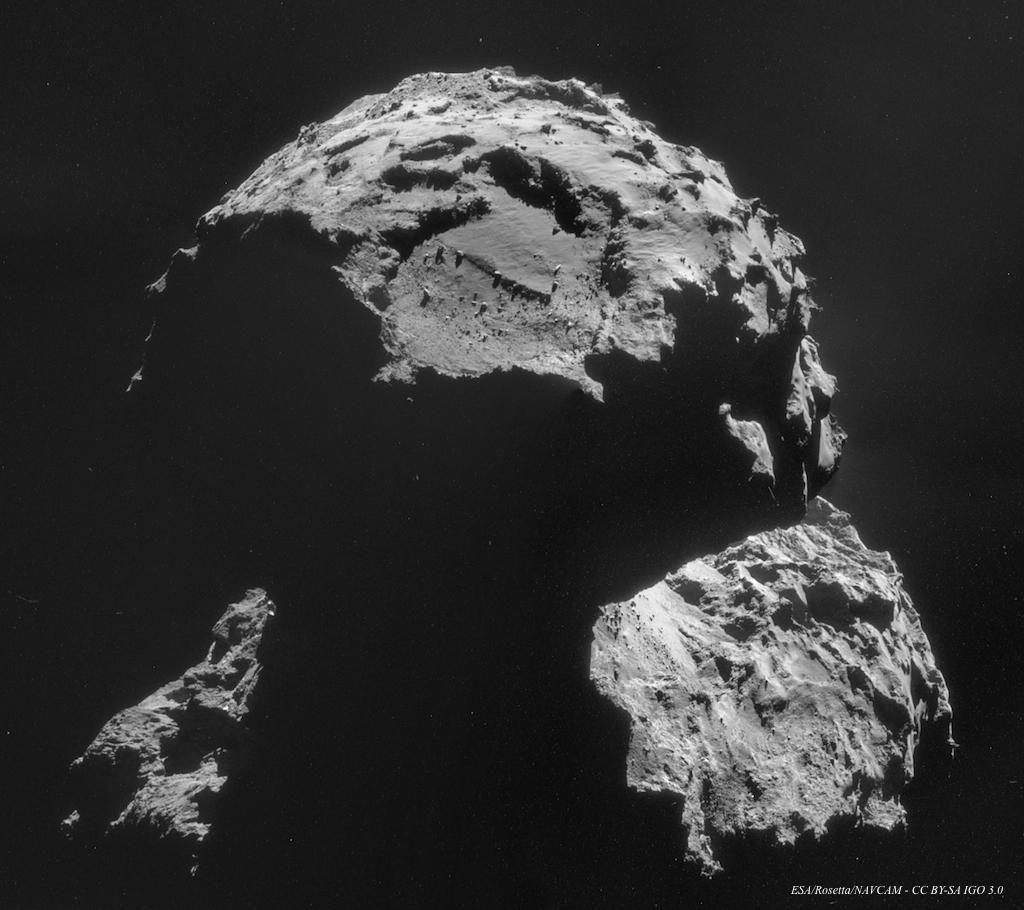 Philae's landing site...  Won't be long now!
Posted by Unknown at (permalink) 5:36 AM No comments: 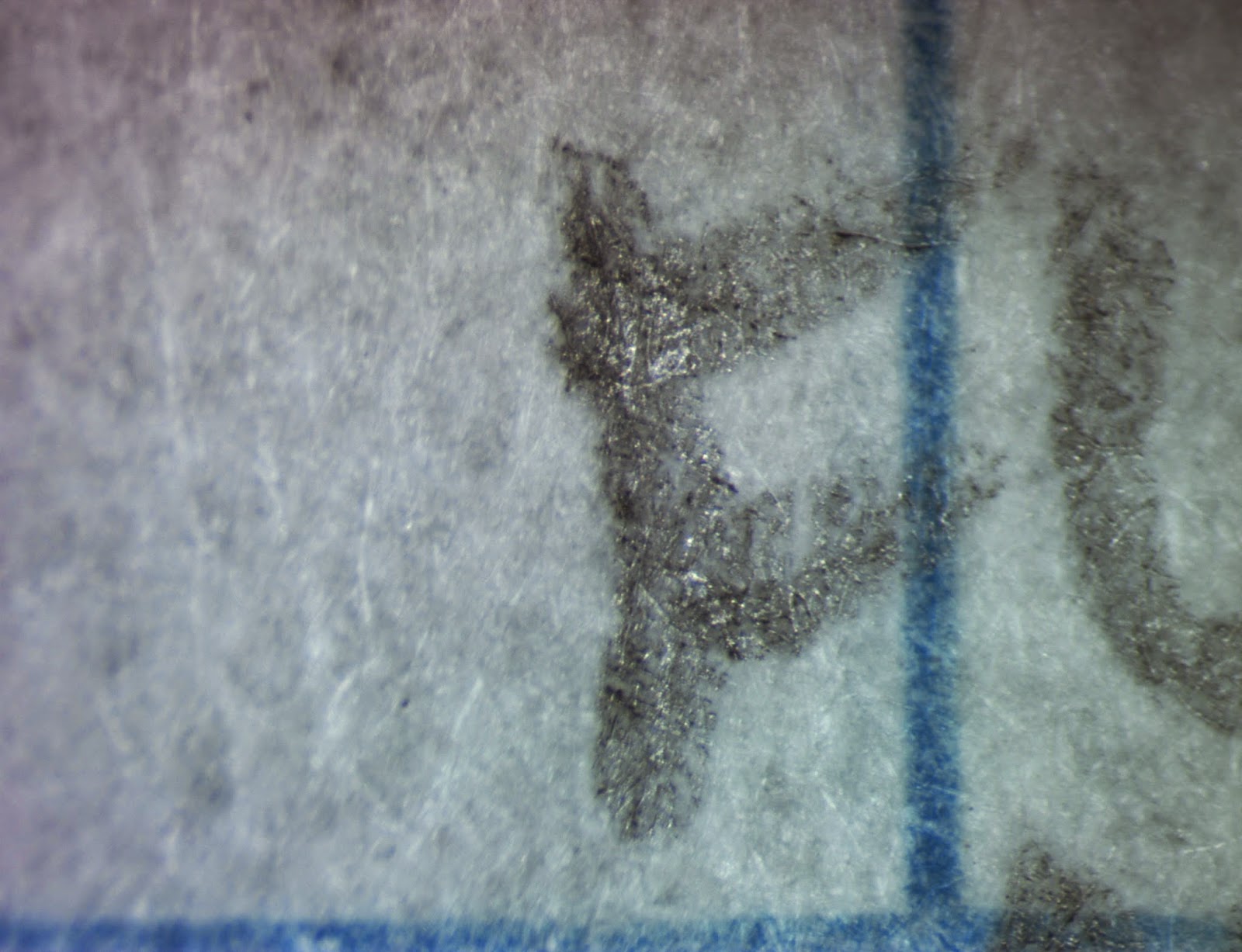 The letter “F”...  This is what a penciled “F” on a piece of graph paper looks like at 60x.  Sure doesn't look like this to the naked eye!
Posted by Unknown at (permalink) 5:34 AM No comments:

This doesn't look good...  The graph at right neatly encapsulates what many are calling fraudulent science.  The blue line is the raw temperature average; the red is the same data after “adjustment”.  I'll call it “very suspicious”, as the adjustment reasons and methodology are not disclosed.

This particular data is from USHCN, but many other sources of climate data worldwide show similar discrepancies between the raw data and the presented data.  The entire issue could be easily resolved if the climatologists would simply release their adjustment methodologies – but to date, not a single one has.  This raises all sorts of red flags for me, as it's the antithesis of the way science is normally conducted...
Posted by Unknown at (permalink) 5:09 AM No comments:

Should we choose our Congress-critters randomly?

I'd rather entrust the government of the United States to the first 400 people listed in the Boston telephone directory than to the faculty of Harvard University.

That's a colorful way of saying that he'd rather be governed by randomly selected citizens than by elites, and that's a notion I have a lot of sympathy for.  I've observed before that by and large, the sort of people who want to be elected are precisely those people I don't want elected.  The natural extension of that thought is that randomly-selected people who don't want the job would make better Representatives and Senators than those we elect.

As this article points out, that general notion is something already embodied in American government, in the form of jury selection.  The process is called sortition, and it has a long and honorable history.

The idea of using sortition to choose Congress-critters is an interesting ponder, though it's extremely unlikely to ever actually be used.  It would require a Constitutional amendment, and every lobbying organization in the universe would oppose it with all their might – including, most especially, the politicians themselves.

The key to making sortition work for this purpose would be to identify the candidate pool to randomly choose from.  It could be as simple as everyone over 21, or it could be more restrictive.  For instance, perhaps we'd exclude those with a criminal record, or those who didn't graduate from high school (or have an equivalent certification).  Perhaps we'd enter some people twice or more: those with military service, or who are business owners.  That pool of candidates has much opportunity for tweaking.

And then, of course, we'd need a really good true random number generator to actually select our new Congress-critters :)

Would this be better than our current system?  My first thought: how could it possibly be worse?!?!
Posted by Unknown at (permalink) 4:54 AM No comments:

True random number generation...  This article (by John Denker, author of numerous other interesting documents) discusses building a low cost true random number generator using the audio system of just about any computer system.  I've no idea how good the result of that would be, but this article is full of useful information about how to process and analyze the data from such a source to generate a useful random number stream...
Posted by Unknown at (permalink) 4:28 AM No comments:

Electronic medical records...  Every doctor I've talked to about electronic medical records hates them.  They require huge amounts of the doctor's time to enter, they're very hard to read, and they're organized in a most inconvenient way.  Every doctor also told me that they liked some of benefits – especially the ability to search – but that it wasn't worth the effort.

Part of it seems to be (rather incredibly) bad implementations.  In other words, crappy software.  That's totally believable, and we can expect that to get better as time goes by – unless there's a government mandate, which of course there is.  In that case, progress is likely to be somewhere between glacial and retrograde.

Aside from those considerations, though, there's another issue: medical records are a great example of unstructured data.  There is no such thing as a single form that can contain all the information on an old-fashioned, hand-written, paper medical record.  The information is there in text, in prose that a doctor wrote to convey some meaning subtler than can be contained by a diagnostic code.  The medical record systems try mightily to eliminate the need for this prose – but they do it by creating a plethora of blanks on forms that must be checked, coded, etc.  Those things are not designed for humans to read, they're designed for computers.  There's a fundamental disjoint between how computers store and process information, and how humans do it – and electronic medical records are attempting to do both.

Does that mean it's impossible to make electronic medical records as good as old-fashioned paper medical charts?  I don't know.  But I do know it will be very hard to make them work well, and the transition will be painful and full of errors.  There may well be offsetting benefits, but I'm not sure they're larger than the effort and consequences of moving to electronic medical records.

Here's something to ponder.   There's another kind of record out there that has some similarities, along with a huge commercial incentive to go electronic: mortgage paperwork.  From a technical perspective, this is a far easier problem than medical records – there's relatively little about real estate that requires unstructured data.  The mortgage industry has poured hundreds of millions of dollars into the effort to eliminate the paperwork through electronic records.  Success to date?  Nearly zero.

This stuff is hard...
Posted by Unknown at (permalink) 4:16 AM No comments:

Sherlock Holmes debugging...  I never thought of it quite like this, but the general technique described (working backwards from the symptoms) is what I think of as normal debugging.  I've observed before that software engineers who are really good at this are relatively rare, and they tend to be the same people who have a deep understanding of entire systems (not just a component or two).  I can add another observation: if you ask most software engineers how they feel about debugging, almost always they'll tell you that either they love it or they hate it.  There doesn't seem to be any middle ground.  And the ones who love it the ones who are likely to be very good at it...
Posted by Unknown at (permalink) 4:02 AM No comments:

Free speech being strangled...  Along with many other (mostly older) observers, I've watched sadly as America's strong tradition of free speech is slowly strangled by ideas like “political correctness” and “offense-free zones”.  This movement toward unfree speech comes most powerfully from the left, with progressive control of our university campuses leading to increasingly awful attempts to muzzle free speech.  It's not exclusive to the left, though: plenty of conservatives would like to limit what you can say – for instance, they'd like to muzzle criticism of the military, or promotion of abortion.  A pox on them all!

Harvey Silverglate has a piece in today's Wall Street Journal that looks at the left's abuses.  He concludes:


Hypersensitivity to the trauma allegedly inflicted by listening to controversial ideas approaches a strange form of derangement—a disorder whose lethal spread in academia grows by the day. What should be the object of derision, a focus for satire, is instead the subject of serious faux academic discussion and precautionary warnings. For this disorder there is no effective quarantine. A whole generation of students soon will have imbibed the warped notions of justice and entitlement now handed down as dogma in the universities.

I agree, Mr. Silverglate.  But how do we stop this?
Posted by Unknown at (permalink) 3:58 AM No comments:

Politically correct slavery...  For decades now, Cuba has been sending medical teams to hot spots in the world.  I've always thought of this as a sort of public relations effort on the part of the Cuban government – they can't afford to dispense the kinds of humanitarian aid that the Western countries do, but sending small teams of doctors and nurses they could do.

Now I learn that Cuba is actually profiting from these efforts!  Mary Anastasia O'Grady has a piece in today's Wall Street Journal that details how Cuba does this.  The doctors aren't going voluntarily, and the money Cuba is paid for this doesn't go to the doctors.  It's slavery, all dressed up to look nice for the leftists in the world...
Posted by Unknown at (permalink) 3:49 AM No comments: