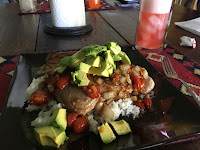 Paradise ponders: ahi, joist boxes, and plywood floors edition...  Yesterday afternoon Debbie made us the most delightful meal: baked ahi with a sweet 'n sour salsa to accompany it, over rice with diced avocado on top.  Oh, so delicious it was!  That's my serving at right, moments before I attacked it.  If you're wondering what that pink concoction I'm drinking is, that's prickly pear flavored Pelligrino sparkling water.  It's one of my favorites of a line I like in general.  I somehow managed to eat that entire mountain of food.  Debbie gave out part way through hers, and that isn't the kind of dish that could be kept and reheated – so the dogs had an unexpected treat.  Much appreciated, it was!  :)  As I write this, Debbie is making today's meal.  I don't know the dish, but I know it involves cabbage, ground pork, and ground beef.  No way that's going to be bad! 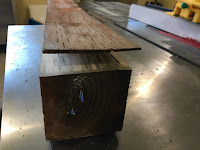 Yesterday and today, Debbie and I worked on building the cedar shed that will house the weather-sensitive components of our irrigation system.  The first step was for me to fabricate the four pressure-treated beams to hold up the floor of the shed, and at the same time compensate for the slope of the concrete slab they'd be sitting on.  At right you can see one of the cuts I had to make, in this case to a 4x4 (I ripped two of these, and also two 4x6s).  First I had to put my saw back together after I tripped the brake the day before, and then I had to run my saw in “bypass” mode so this wet lumber wouldn't trip it again.  That all worked fine.  All these cuts were carefully calculated in terms of the height of the resulting beam, and the 1.6° angle of the cut.  I had to dust off my high school trigonometry to figure all this out! :)

I also had to fabricate three holes in each of the four beams, where the hold-down bolts will go through to the concrete slab below.  Each of these holes has a 1.75" high hole that's 9/16" diameter, just big enough for the tie-down bolt to extend through.  Above that, through the remaining thickness of the beam, is a 1.25" diameter hole that will accommodate a nice thick washer to spread the load on the wood, and my socket wrench so I can torque that bolt down.  The photos below show me doing the holes, with the last photo showing the debris under my drill press once I'd finished.  What a mess! 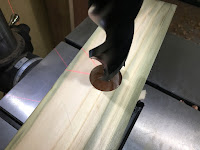 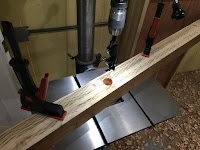 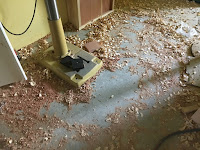 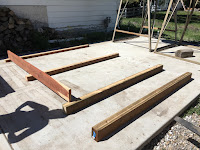 After finished the fabrication of these four beams, I loaded them up on my tractor and hauled them out to the site where we're erecting the shed.  I put them down in the approximate position they'd be under the floor, and then put a test board up across them (at right).  Note how the closest beam is quite a bit taller than the furthest – that's to correct for the fairly steep slope of the slab.  I was testing for level and for alignment of the top surfaces of the boards, and I was very happy to see that both of them were spot on.  Yay!  Trigonometry and careful fabrication works!

Finally it was time for some actual work on the kit itself.  Much of the first step (constructing the floor) would be easier with two sets of hands, and Debbie volunteered to help.  It's wonderful that she's recovered enough to even consider doing this, and she not only did it, she did it well.  I took the first photo as we were building the first (of six) “joist boxes” for the cedar 2x4 joists that would support the plywood floor.  In the second photo you can see a finished joist box leaning up against a wall section.  The third photo shows the lazy man's way to transport the joist boxes from where we assembled them to where we'd be using them.  Love that tractor!  The fourth photo shows two joist boxes being screwed together.  The clamps are holding them in alignment while I'm screwing in the screws – they made it very easy to get everything perfectly lined up.  The fifth photo shows the plywood floor sections (each the size of a joist box) laid in place.  Finally, the last photo shows the floor completely assembled, glued and screwed to the joist box (and, most importantly, all aligned correctly). 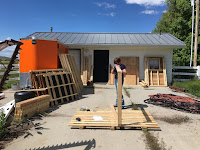 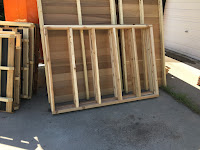 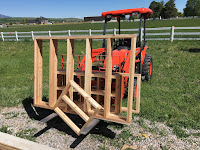 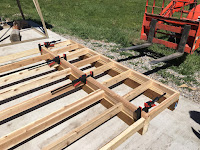 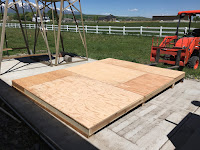 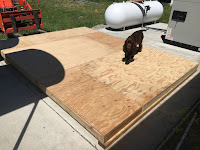 Tomorrow I'll be leaning that floor up against the fuel tanks adjacent to it, and fastening the four big beams to the concrete.  Then I'll be putting the floor back down onto the beams and installing the metal connectors that will tie the floor solidly into the beams.  Some of the metal connectors (for the shortest two beams) will have to be modified slightly, as they're bigger than the beams at the moment.  I'm expecting that to take all day, and perhaps a bit longer if all doesn't go well.

Tonight I am one tired puppy – more tired, really, than I ought to be.  I sure hope my thyroid's sluggishness turns out to be the problem, and that once we get the dosage adjusted correctly I'll regain my former energy levels.  Last year this amount of work wouldn't leave me in the quivering-muscle state I'm in right now.  I don't like this at all, not one little bit.  As Debbie likes to say, getting old is not for sissies...
Posted by Unknown at (permalink) 2:58 PM No comments: