Go here.
Posted by Unknown at (permalink) 3:03 AM No comments:

Here is the complete text of a very short story posted by one Ben Knight, of the AP:

The political leader of Hamas has declared that his organisation won the recent war in the Gaza Strip.

On Wednesday, Israel's army said it had completely withdrawn from the strip, although troops will remain near the border and its spy-planes continue to fly over the territory.

News of the withdrawal sent people back onto the streets for the first time in weeks, as shops opened and people began restocking, after three weeks when many had barely left their houses.

While the fighting has ended in Gaza, the battle to rebuild the territory is just beginning and the destruction is immense.

Whole neighbourhoods have been literally flattened. People are sleeping out under carpets strung across the branches of trees.

The Hamas leadership is still in hiding.

I did a double-take when I read this. If you didn't, just read the first line and the last line, and skip the rest.

What is wrong with these reporters, filing credulous stories on such obvious BS? Are they paid to produce such propaganda? I'm truly beginning to wonder...

Posted by Unknown at (permalink) 2:46 AM No comments:

From Andrew, posting at the Protein Wisdom Pub:

You just had to, didn’t you? You couldn’t just enjoy your victory, couldn’t just let the man slip away beneath the radar of your Profound and Righteous Contempt. You had to channel your inner adolescent and flip him one last bird, just in case we haven’t been privy, with diamond clarity, to your exact opinions on the matter. You just had to get in that final kick.

That pretty much sums up my feelings about the grace and maturity of what appears to be the majority of left-leaning folks as Obama takes over from Bush.

Some of you wrote to ask how I was feeling about Obama's inauguration, wondering about my silence. Well, the silence was mostly about being busy. But also partly because I don't have a lot to say. I wish Obama well, and I truly hope he will prove to be an effective President. Most of all I hope he keeps us safe.

So far, I think I'm happier than most liberals are on those two counts.

The rest of what he does is about 5 levels down on my priority scale...

Posted by Unknown at (permalink) 2:33 AM No comments: 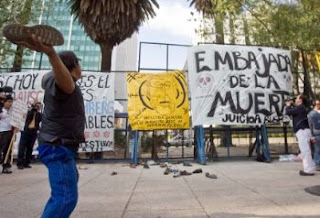 From yesterday's edition of El Economista (a Mexican newspaper), which included the photo at right of a demonstration in front of the U.S. Embassy in Tijuana:

Indiscriminate kidnappings, almost daily beheadings, and gangs that scoff at government agents and kill them. No, it’s not Iraq nor Pakistan, its Mexico, which according to the American government and a growing number of experts is becoming one of the major world security risks.

The possibility that the neighbor of the United States could sink into violence and anarchy represents an unexpected challenge for Barack Obama’s next government.

In its most recent report about foreseeing possible risks to global security, the Joint Command Forces of the United States placed Mexico and Pakistan in the same category. It pointed out that both countries are in danger of a “fast and sudden collapse.” In its report published on November 25, the command pointed out “The possibilities that (that may occur in) Mexico appear small, but the government, its politicians, police and judicial infrastructure, are all under pressure and a sustained assault by criminal gangs and narcotraffic cartels. “The form that this internal conflict may take during the coming years will have a relevant impact on the stability of the Mexican government.”

One more challenge for Obama

The ex chief of the Central Intelligence Agency (CIA) Michael Hayden told the Mexican press on Friday that Mexico and Iran represented the major challenges for Obama, including over Iraq.

The Department of Justice of the United States pointed out last month that Mexico’s criminal gangs represent the “major organized crime threat for the United States.”
Stephen Hadley, national security advisor, said last week that the worsening of violence threatens democracy itself in Mexico.

The Secretary of Internal Security (sic) of the United States, Michael Chertoff, told The New York Times that he had ordered the elaboration of additional security plans, at midyear, to avoid that kidnappings and assassinations would extend into American territory.

The alarm is also extending into the private sector. Mexico, Latin America’s second largest economy and the third largest provider of petroleum to the United States, is one of the 10 principal global threats for 2009 identified by the Eurasia Group, consultants based in New York.

Mexico has underestimated the preoccupations by the United States.

On Wednesday, Fernando Gomez Montt, Mexican Secretary of Government, said “What does seem to me inadmissible is that the Mexican State be considered as a security risk. There are problems in Mexico that are being attended to, that can be attended to more and better, and that’s where we are, what exists is everyone’s absolute commitment.”

Nevertheless, Obama will find a very different panorama in the neighbor to the south, compared with what George W. Bush found. In 2000, when Bush was elected, Mexico had just elected Vicente Fox in elections considered the cleanest in history, which put an end to 71 years of a single party in power. Mexicans were hopeful of a stable and democratic future.

Fox suggested that he was ready to confront the narcotrafficking cartels, but he placed them in a power vacuum by arresting its leaders. Since then, gangs fight each other for territory.

Seeking to regain control, Felipe Calderón, who succeeded Fox in 2006, immediately placed military forces in the whole country. But the soldiers and police are outnumbered and outgunned, and the narcotraffickers have answered with unprecedented violence.

Deaths attributed to narcotraffic doubled from 2007 and added up to more than 5,300 last year. Mutilated cadavers, some without heads, show up in the streets of Ciudad Juarez and Tijuana practically every morning. Some victims are dumped at schools. The majority turns up wrapped in blankets and abandoned in empty lots.
Few cadavers are identified because relatives are afraid of coming to claim them. The majority of assassinations go unpunished.

The battling cartels continue controlling vast areas of Mexico, despite the offensive undertaken by Calderón more than two years ago.. They have let loose an extended culture of violence, from which no one is immune.

Some businesses have closed because their owners cannot pay the monthly extortion amounts which the local gangs demand. Many wealthy persons have fled to the United States so as not to join the list of kidnapping victims, a crime about which Mexico occupies one of the first places in the world. Others have decided not to leave their houses at night.

The government has also launched a campaign to combat corruption in its ranks, “Operation Cleanup” after some of its prominent security chiefs were accused of being at the service of the Cartel of Sinaloa, a northwestern state of the country.

Several soldiers who fight the narcotrafficking gangs were kidnapped, decapitated and dumped in a city to the south of Mexico (City), with a warning: “For every one of mine that they kill, we’re going to kill ten of theirs.”

The United States government has manifested its support to the Mexican president decidedly (by) recently giving it more than 400 million dollars in assistance to combat drugs. Last week, Obama met briefly with Calderón in Washington and promised to combat the illegal U.S. firearms traffic destined to the Mexican cartels.
Although fewer Americans are willing to cross into the Mexican border area to enjoy a “margarita” or to buy handicrafts, visitors to other parts of Mexico continue to arrive. The Mexican economy seems more hurt by the global crisis than by the growing violence.

The gloomy perspectives arising from the border ruled the Mexican press headlines, but surprised few in Mexico.

Many say that the solution is for the United States to furnish more aid and to allow the entry of migrants who, otherwise, are tempted to dedicate themselves to drug smuggling to earn a living.

Otherwise, violence will propagate with more intensity toward the United States, said Manuel Infante, an architect.

“There is a wave of barbarism that is trying to reach you” said Infante, in reference to the Americans. “We are an uncomfortable neighbor,” he added.

It still amazes me how utterly invisible this problem is to most Americans – even those who live right next to hotspots like Tijuana...

Posted by Unknown at (permalink) 2:17 AM No comments:

An oldie-but-goodie via my cousin Mike, on the difference between teachers and educators:

According to a news report, a certain private school in Washington was recently faced with a unique problem. A number of 12-year-old girls were beginning to use lipstick and would put it on in the bathroom. That was fine, but after they put on their lip stick, they would press their lips to the mirror leaving dozens of little lip prints.

Every night the maintenance man would remove them, and the next day the girls would put them back.

Finally the principal decided that something had to be done. She called all the girls to the bathroom and met them there with the maintenance man. She explained that all these lip prints were causing a major problem for the custodian who had to clean the mirrors every night (you can just imagine the yawns from the little princesses).

To demonstrate how difficult it had been to clean the mirrors, she asked the maintenance man to show the girls how much effort was required.

He took out a long-handled squeegee, dipped it in the toilet, and cleaned the mirror with it. Since then, there have been no lip prints on the mirror.

There are teachers ... and then there are educators...

Posted by Unknown at (permalink) 2:12 AM No comments: