Rodeo night...  Debbie and I went to the Hyrum Rodeo last night (lots of news photos here).  Most of this was very enjoyable.  The barrel racing is my favorite: fast horses and beautiful women, as the announcer said.  From the noise she made, I'd say Debbie's favorite events were all the bull and bronc riding events.  I enjoyed seeing all the families there, and the excitement of the youngest ones as they watched.  Also a lot of fun to watch: “mutton-busting”, wherein some very young kids (I think some were only 5 or 6 years old) compete to see who can ride a sheep the longest.   Some of the kids were thrown off in the first foot or two, some launched themselves off the sheep in fear, some didn't even start – but a few rode the sheep, sometimes running very fast, for five or six seconds.  That may not seem like a long time, but I'll bet it was for the kid!

There was one event near the end of the evening that somewhat spoiled things for me: a young man was injured while attempting to ride a bull.  We don't know much about his condition.  He was carried off the field in a stretcher with two EMTs in close attendance.  The announcer said that he was awake and talking to the EMTs, but that's all we know.  Watching the event, it's very clear that bull riding is a crazily risky thing to do – in fact, no comparably risky sport comes to mind. We're hoping the fellow will recover completely from this, and also hoping that we can get some news on his condition...
Posted by Unknown at (permalink) 9:09 AM No comments: 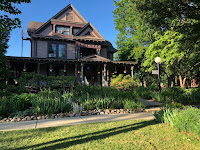 Day 4...  We drove from Champaign, Illinois to Ashtabula, Ohio.  Basically today we were just covering ground; nothing in particular expected in scenery or things to do.  We woke up this morning in our pleasant B & B in downtown Champaign (at right): the Champaign Garden Inn. The previous evening we'd taken a nice walk around a few blocks in the area – brick streets and older homes with big, big trees.  We explored around a defunct and rundown YMCA – very grand looking, it must have been.

The drive across the rest of Illinois, all of Indiana, and most of Ohio was not especially remarkable in general.  There was lots and lots of beautiful farmland, and the occasional annoying city (I'm looking at you, Indianapolis!).  We were both taken aback by the terrible condition of the roads in Indiana, and frightened by the rude and aggressive drivers.  As in nearly all of our trip, we kept running into construction delays – often for no apparent reason, as there was nobody doing any actual work.

We also noticed for the first time that the big birds circling overhead were nearly all buzzards or vultures – hawks were rare.  In the west, it is precisely the opposite, with hawks (or other raptors) dominating the thermal-effect gliding crowd.  Neither of us remembered this from our childhood, so either we've become so accustomed to raptor domination in the west that we've forgotten – or raptors have befallen hard times in the east.  Once we noted this (to us) strange fact, we were on the lookout constantly – and the raptor shortage held for our entire trip until we got well into South Dakota on our return.  Weird!

The highlight of the day, without a doubt, was Akron, Ohio.  I've been in Akron before, though not since the mid-'70s, and I was not expecting what we found on this day: the city was clean, green, and filled with prosperous businesses.  I've no idea why it's an island of attractiveness in the middle of a desert of relative poverty, but it is.  When scouting for a place to eat our dinner, we spotted something that seems most unlikely: a restaurant specializing in poke (the Hawai'ian raw fish dish that we love).  We decided to try it, and we were very glad we did!  Our poke bowls below: 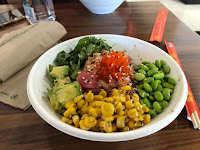 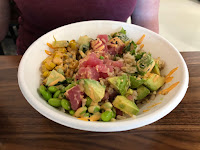 These were made to order, and delicious!  The style wasn't much like the poke we've had in Hawai'i, but no matter –  it was really good.  Then after we downed our poke, we wanted some ice cream – and we found Mary Coyle's homemade Italian ice cream parlor.  Heaven! 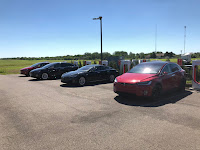 At one of our supercharging stops (I've forgotten which) on this day, we had something unusual (for us, anyway) happen: at the same time there were four Teslas at one supercharger, and three of them were Model Xs (the oddball was a Model S)!  This was so weird I had to take a photo of it. :)  I understand from friends that in the big cities the superchargers are often full, with a waiting line, but we've never had this happen.
Posted by Unknown at (permalink) 8:56 AM No comments: