Blacks are happy; Obama was elected.

Whites are happy, OJ is in jail.

And all of us are happy; The election is finally over!

2009 should be even better: Immediately after his inauguration, Obama will balance the budget, revive the economy, solve the real estate problem, solve the auto industry problem, solve our gas/alternative energy problem, stop the fires and mudslides in California, ban hurricanes and tornadoes, stop identity theft, reverse global warming, find Osama, solve the Israeli-Palestinian conflict, get rid of corruption in government and achieve world peace.

Then on the 7th day, He will rest.

Expectations for The One are very high, and the press seems to keep ratcheting them up even higher. Some Democrats are already actively trying to set expectations lower, as they know even The One can't possibly meet them all.

Judging from his Cabinet appointments (about all we've got to go on so far), The One doesn't appear to be all that much of a change from the current Administration – a surprising development indeed. Most of the conservatives and libertarians I've talked with sound more hopeful than the liberals I've talked with, as the latter are in despair over The One's apparent abandonment of liberal objectives such as immediate withdrawal from Iraq, diplomatic engagement with Iran, and a more pro-Palestinian position in the Middle East.

The most hopeful thing I've seen so far is Obama's decision to retain Gates as Secretary of Defense, something I certainly didn't expect after Obama's campaign rhetoric decrying the current prosecution of the war in Iraq...

Posted by Unknown at (permalink) 9:16 AM No comments:

Click the cartoon at right to find out how you can be very respectful of your neighbor's right to ban all guns. And protect yourself and your family at the same time...

Via my wife, who shares my own views on the utility of fine weapons and large stocks of quality ammunition. She's perfectly capable of using our Berretta riot gun (a semi-automatic shotgun with a 7 shot magazine), plus she's a fine shot with a .357!
Posted by Unknown at (permalink) 9:11 AM No comments:

Every single night of 2008, over 100 cars were burned – nearly all of them by young Muslim men. Then on New Year's Eve, two nights ago:

PARIS (AFP)--More than 280 people were detained and more than 1,000 cars torched during New Year celebrations across France, mostly in its troubled suburbs, the interior ministry said Thursday.

Four police officials were slightly injured, according to the interior ministry, which said its security forces "were of the unanimous view" that New Year's Eve was "rather calm and without major incident."

The interior ministry had earlier said 445 vehicles were set on fire overnight, but later revised that figure to 1,147.

Can you imagine even the much larger U.S. tolerating such a thing? This is multi-culti at its “finest” – totally ignoring the reality of the situation, and dealing with it by forbidding the press from making accurate reports (they're not allowed to mention that the perpetrators are almost entirely Muslim). The numbers of cars burned each night is incredible – over 40,000 in 2008 – but the French media is not allowed to report this. Still, with that many cars being burned it must be common knowledge there.

I keep getting surprised (though I suppose I shouldn't be) at how many Americans are completely unaware of this front of the radical Islamic war against civilization. A single car burned by radical Muslims in San Diego would be all over the news, and not tolerated – of this I am certain. But I'm not certain how long that will be true, for the party that just came into power routinely holds France up as an example of how we should approach radical Islam...

Posted by Unknown at (permalink) 8:21 AM No comments:

Here are a few more micrographs from the EyeClops. This time I've got four views of the same digit ‘4’ from the CI scale of a top quality slide rule (a Hemmi 269, for you slide rule aficionados). The characters on this slide rule are “engraved” (actually they are hot-stamped into the plastic). From left-to-right, the magnifications are 100x, 200x, and 400x. Click to enlarge. 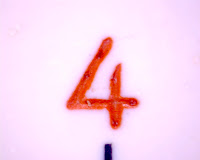 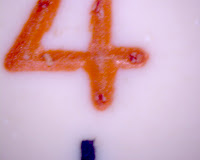 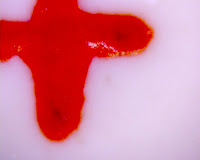 The slide rule's plastic is actually bright white, and the red doesn't look quite as vivid as it does in these micrographs. I believe these color distortions are due to the LED lighting used on the EyeClops; I'll test that when I get a chance by using sunlight. In any case, I'm still blown away by how good these images are, produced by a cheap toy...
Posted by Unknown at (permalink) 6:58 AM No comments: 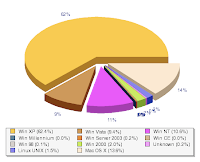 It's been a while since I last took a look at what operating system my readers are using (your browser reports this information to the blog). The graph at right (click to enlarge) shows the results, but here are the top four:

The first one is no surprise, except the number seems a little low – virtually every workstation I know of that isn't a Mac is running Windows XP. The Macintosh number just blows me away – Apple is making real inroads amongst my readers, that's for sure! A year or so ago, this number was under 2%. But the biggest surprise for me was Windows NT – who in the world is still using that? At first I thought it must be Windows 2000 being reported as Windows NT, but no, Windows 2000 is separately reported (at 2%). Finally there's Vista, with a pretty sorry showing – Microsoft's 10 year old OS (Windows NT) is still beating out their latest!

Why do I rant about the lamestream media? Patterico summarizes a year's worth of just the most egregious “reporting” by one of the country's most respected newspapers: the Los Angeles Times. And this is just one of them!

For those of you following the events in Gaza, here's the IDF's YouTube channel, their web site (English), and their official blog. All of these are being updated frequently...

Bill Roggio has an excellent summary of terrorist activity and status, worldwide. It's exactly the sort of factual reporting I've come to depend on alternative media for, instead of the meaningless blathering the lamestream media calls “reporting”...