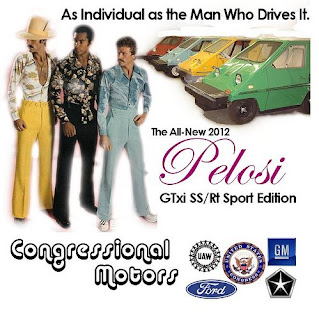 Reader Simi L. sent me an email with this essay, and then a little Googling let me know it was written by Iowahawk. Now, Iowahawk has written some wonderful and funny stuff – and this piece doesn't disappoint. Here's the lead:

It's in the way you dress. The way you boogie down. The way you sign your unemployment check. You're a man who likes to do things your own way. And on those special odd-numbered Saturdays when driving is permitted, you want it in your car. It's that special feeling of a zero-emissions wind at your back and a road ahead meandering with possibilities. The kind of feeling you get behind the wheel of the Pelosi GTxi SS/Rt Sport Edition from Congressional Motors.

All new for 2012, the Pelosi GTxi SS/Rt Sport Edition is the mandatory American car so advanced it took $100 billion and an entire Congress to design it. We started with same reliable 7-way hybrid ethanol-biodeisel-electric-clean coal-wind-solar-pedal power plant behind the base model Pelosi, but packed it with extra oomph and the sassy styling pizazz that tells the world that 1974 Detroit is back again -- with a vengeance.

We've subsidized the features you want and taxed away the rest. With its advanced Al Gore-designed V-3 under the hood pumping out 22.5 thumping, carbon-neutral ponies of Detroit muscle, you'll never be late for the Disco or the Day Labor Shelter. Engage the pedal drive or strap on the optional jumbo mizzenmast, and the GTxi SS/Rt Sport Edition easily exceeds 2016 CAFE mileage standards. At an estimated 268 MPG, that's a savings of nearly $1800 per week in fuel cost over the 2011 Pelosi.

Posted by Unknown at (permalink) 5:20 PM No comments:

I don't know whether to laugh or cry after reading Mark Steyn's recent piece We're in the fast lane to Bailoutistan. Here's the end of it:

See the USA from your Chevrolet: An hereditary legislature, a media fawning its way into bankruptcy, its iconic coastal states driving out innovators and entrepreneurs, the arrival of the new Messiah heralded only by the leaden dirge of "We Three Kings Of Ol' Detroit Are/Seeking checks we traverse afar," and Route 66 looking ever more like a one-way dead-end street to Bailoutistan. Boy, I sure could use a poem by Jacqueline Kennedy Onassis right now, even one of the lesser-loved ones.

"I feel like I lost my country," the Hudson Institute's Herbert London said the other day, wondering whatever happened to the land of opportunity and dynamism. But I'm more of an optimist. Maybe Princess Caroline will be appointed CEO of GM and all will be well. Or maybe Bed, Bath & Beyond will put wheels on the Swash 700 Elongated Biscuit Toilet Seat Bidet.

And on that cheery note let me wish you a very Hopey Changemas.

You know you want to go read the whole thing...

Posted by Unknown at (permalink) 5:10 PM No comments:

Common Sense - Where DId It Go?

Today we mourn the passing of a beloved old friend, Common Sense, who has been with us for many years. No o ne knows for sure how old she was since her birth records were long ago lost in bureaucratic red tape. She will be remembered as having cultivated such valuable lessons as knowing when to come in out of the rain, why the early bird gets the worm, life isn't always fair, and maybe it was my fault.

Her health began to deteriorate rapidly when well intentioned but overbearing regulations were set in place. Reports of a six-year-old boy charged with sexual harassment for kissing a classmate; teens suspended from school for using mouthwash after lunch; and a teacher fired for reprimanding an unruly student, only worsened her condition.

Common Sense lost ground when parents attacked teachers for doing the job they themselves failed to do in disciplining their unruly children. It declined even further when schools were required to get parental consent to administer Aspirin, sun lotion or a Band-aid to a student, but could not inform the parents when a student became pregnant and wanted to have an abortion.

Common Sense lost the will to live as the Ten Commandments became contraband; churches became businesses; and criminals received better treatment than their victims. Common Sense took a beating when you couldn't defend yourself from a burglar in your own home and the burglar can sue you for assault.

Common Sense finally gav e up the will to live, after a woman failed to realize that a steaming cup of coffee was hot. She spilled a little in her lap, and was promptly awarded a huge settlement.

Common Sense was preceded in death by her parents, Truth and Trust; her husband, Discretion; her daughter, Responsibility; and her son, Reason. She is survived by three stepbrothers; I Know my Rights, Someone Else is to Blame, and I'm a Victim.

Not many attended her funeral because so few realized she was gone. If you still remember her, pass this on. If not, join the majority and do nothing.

First thought I had after reading this: what do you suppose any of the Founding Fathers might think of what their creation has turned into? I think they'd be horrified and revolted – and they'd consider their finest achievement to have failed...