When Peggy Noonan's writing started wandering down a strange path (this started when Obama was campaigning in 2008), it was a big disappointment for me.  I used to eagerly await her new column each week, and only rarely did she fail to deliver an interesting insight.  For a couple of years, one got the sense that somehow she'd been partly hijacked by the progressives.  I stopped reading her column altogether, and only when some other bloggers started mentioning her writing again a few months ago did I pay attention myself.

Now I'm back reading her column each week, for she seems to have shrugged off whatever “infection” she had.  Her column from last week is a great example of the kind of writing I cherished before.  Here she's commenting about Chilean President Piñera's reaction to learning about the mine collapse and missing miners:


What do you do? You throw yourself at the problem. You direct your government: This is the thing we do now. You say, "We will get the men." You put your entire persona behind it, you put it all on the line, you gamble that your nation can do it. You trust your nation to do it. You do whatever possible to see your nation does it. And the day the rescues are to begin, you don't show up and wring your hands so people can say "Ah, he knew it might not work, he was not unrealistic, he was telling us not to get our hopes up." No, you stand there smiling with joy because you know it will work, you know your people will come through, you have utmost confidence. And so you go and radiate your joy from the first moment the rescue began and the first man came out straight through to the last man coming out. You stand. You stay. It was the opposite of the governor of Louisiana during Katrina, projecting helplessness and loserdom, or the president flying over the storm, or the mayor holing up in a motel deciding this might be a good time for a breakdown. This was someone taking responsibility.

This is the same comparison I made in an earlier post, though presented more eloquently than I ever could.  She's captured (in her entire post) exactly the set of reactions I had to Chile's oh-so-competent handling of the mine collapse, and our governments “loserdom”.

Nice to have your old self back, Peggy...
Posted by Unknown at (permalink) 4:34 AM No comments: 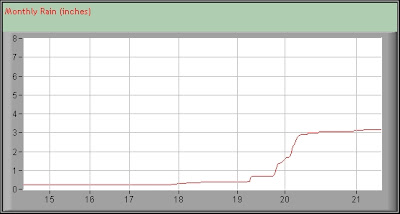 As of this past Monday morning, we'd had a total of a quarter inch of rain in October.  As of this morning, the guage stood at 3.15 inches – so we've had almost three inches of rain in three days.  The bulk of our rain came on Tuesday night, as you can see on the graph at right.

Folks who have lived out here for over thirty years tell us that they don't remember another October that was so cool and wet, and all the research I've done into historical weather records backs up their memory.  Two years ago the anthropomorphic global warming folks were telling us to “stand by” for endless hot, dry summers and more wildfires like the Cedar fire.  For some reason I don't hear them saying much about this year, which has set all sorts of records in the exact opposite direction...

What did we have less of?  Power.  At around 9:30 pm on Tuesday night, Debbie and I were snoring away – but were (very) rudely awakened by the God-awful squalling of some infernal electronic device.  This turned out to be our carbon monoxide detector, which was offended because we had lost power.  I turned it off and went back to bed; such power outages are quite common out here after a storm.

But when we woke up at 2:30 am on Wednesday morning, we still had no power.  This was more unusual; the power company crews normally do an amazing job of fixing outages quickly.  For something to be out for five hours indicated a more serious problem than we usually experience.

So after some caffeination, around 4 am, Debbie and I jumped in our truck and went on a quest to find the source of the outage, and to see if we could get some progress information from the crew.  We drove all the way out of Lawson Valley to Skyline Truck Trail in complete darkness – nary a light to be seen anywhere along the route.  That was actually a bit eerie.  We continued up over the little knob until we could see the town of Jamul, which was lit up as usual.  And we saw three SDG&E (the local power company) trucks parked down near the stop sign.

I stopped and talked with the three crews, who were taking a break after finishing repairs on an outage near the church in Jamul.  They were unaware of an outage in Lawson Valley, but looked it up on a laptop computer.  From this same computer they were able to see where the outage affecting us was, and they were able to get status: good progress was being made, and they estimated a couple more hours until power was restored.  Back home we went, but first we took a slight detour to see the actual outage.  This was near the intersection of Lawson Valley Road and Lyons Vally Road, just south of Skyline Truck Trail.  When we got there, we could see a crew at work, high on a hill just northwest of the intersection.  We'd learned that the outage was caused by lightning striking and breaking the wires, and that high location would be exactly where you'd expect such an outage.

Our power came back on around 6:30 am, close enough to their estimate, nine hours after we lost it...
Posted by Unknown at (permalink) 3:55 AM No comments: