Today we visited some places we'd never been before.  It was interesting, but not something we'd care to repeat – we like the central San Juans better.  We started by driving on State 550 down past Silverton to the Needles skiing area, some 20 miles south of Silverton.  From here we went up Hermosa Creek, then over the pass to State 145.  Finally we went north on State 145 until we got to Ophir, then we went over the Ophir Pass to get back to State 550.

There were parts of the first half of the trip that we really enjoyed.  For instance, within 15 minutes of getting on the dirt roads, we'd seen two does with fawns, quite close to the car.  Then as we drove up Hermosa Creek and toward the pass, we reveled in the trip through a mature forest, rich in understory growth and that “old forest” smell.  We also spotted (and had outstanding viewing of) two adult male western tanagers, one of the most beautiful birds we know.  But in general the path we took was remarkably light on wildlife, for reasons we don't understand.  The habitat looked like it was designed for deer and elk, yet except for a couple of isolated deer, the rest of the trip we saw nary a one. 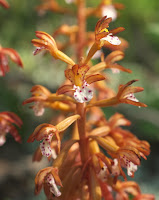 The wildflowers were intermittently interesting.  The most exciting find was this tiny orchid (each bloom was the size of a pea).  I've never seen anything like it before, but it's easy to see how one could miss this.  I only noticed it as we were driving slowly thorugh a road cut that happened to bring the ground level of the surround forest to my eye level as I was sitting in the jeep.  I glanced over and saw this on the forest floor, not six feet away from me as I drove by.  It had no scent that I could detect...

As we drove up Hermosa Creek, we looked down from the road and saw a group of cattle moving downstream (see photo at right; click to enlarge).  The whole group was being hustled along by a horse-mounted cowboy and his two dogs.  Debbie looked at the cowboy through the binoculars and pronounced him an “old codger”.  I'm not sure what that makes me!

Ophir Pass...  It's the least attractive, least interesting pass we've seen yet in the San Juan Mountains.  We're not going back there again.  I'd approve donating it to Venezuela or some other thugocracy...

Here are some more scenes from the day.  The cabin and the associated sign were sort of interesting – I had no idea that uranium and vanadium ore were found together, or that vanadium ore was called “red cake”:

Finally, here are the remaining flowers from the day: 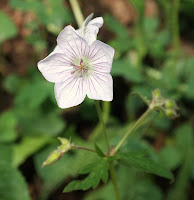 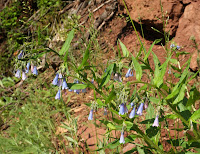 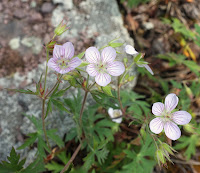 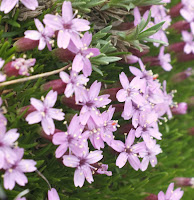 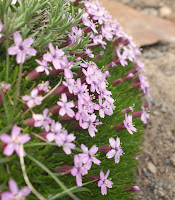 Posted by Unknown at (permalink) 4:39 PM No comments: