Barone on the Dangers of Liberal Judges...

Well, that's not actually his theme, but it might as well be – at least in this passage:

This is the sort of thing Justice Ruth Bader Ginsburg described in the text as just the workings of politics. Writing in Slate, Yale Law faculty member Emily Bazelon goes further. She laments that the promotion test rewarded memorization and that it favored "'fire buffs' -- guys who read fire suppression manuals on their down time."

She is outraged that a fire department might want to promote firefighters who know more about suppressing fires, rescuing victims and protecting their colleagues rather than simply promote a predetermined number of members of specific racial groups whose self-appointed political spokesmen back the politicians in office. 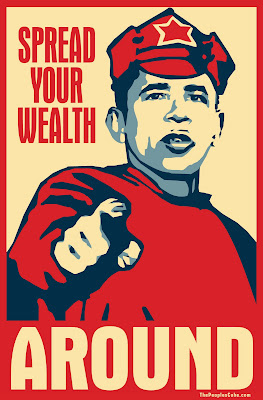 More here.
Posted by Unknown at (permalink) 6:14 AM No comments:

The Mustache, on Iran...

John Bolton is one of the consistently sane and adult voices on Iran. From his piece in today's Washington Post:

Only those most theologically committed to negotiation still believe Iran will fully renounce its nuclear program. Unfortunately, the Obama administration has a "Plan B," which would allow Iran to have a "peaceful" civil nuclear power program while publicly "renouncing" the objective of nuclear weapons. Obama would define such an outcome as "success," even though in reality it would hardly be different from what Iran is doing and saying now. A "peaceful" uranium enrichment program, "peaceful" reactors such as Bushehr and "peaceful" heavy-water projects like that under construction at Arak leave Iran with an enormous breakout capability to produce nuclear weapons in very short order. And anyone who believes the Revolutionary Guard Corps will abandon its weaponization and ballistic missile programs probably believes that there was no fraud in Iran's June 12 election. See "huge credibility gap," supra.

In short, the stolen election and its tumultuous aftermath have dramatically highlighted the strategic and tactical flaws in Obama's game plan. With regime change off the table for the coming critical period in Iran's nuclear program, Israel's decision on using force is both easier and more urgent. Since there is no likelihood that diplomacy will start or finish in time, or even progress far enough to make any real difference, there is no point waiting for negotiations to play out. In fact, given the near certainty of Obama changing his definition of "success," negotiations represent an even more dangerous trap for Israel.

I just hope he's right about Israel's willingness. That boils down, I think, to whether or not Obama has any success muzzling Bibi (Netanyahu). History would suggest that Bibi is hard to muzzle, fortunately...

The Issue For American Healthcare... 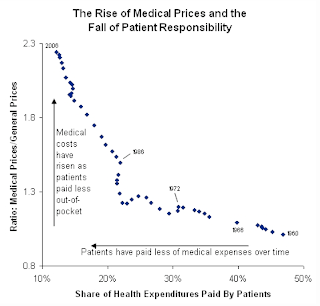 A slight exaggeration, perhaps. But Warren Meyer of CoyoteBlog has been consistently making the point nicely illustrated on the graph at right: that as people have more personal responsibility for paying the costs of their medical care, the prices come down.

The blog post linked above makes the case in much more detail. The fundamental point, though, is very simple: when people have to pay for something themselves, they'll start making decisions based on the value to themselves.

Outside the healthcare arena, everybody seems to accept this notion without argument. For example, when you buy a car, you weigh the cost of a particular model against its value to you. This gives the manufacturers a huge incentive to deliver more value for the dollar – the direct result of which is we can buy the marvelous machines that are today's cars (or computers, or whatever) at historically astonishingly low prices.

But healthcare in America today doesn't work this way. Patients have zero incentive to shop for more healthcare value for the dollar. Why should they, when the insurance company is going to pay for nearly whatever they ask for? Ditto for doctors – they actually have disincentives for saving money. Their best interest (reduced litigation) is to over-order both diagnostics and theraputics.

Meyer's suggested fix is to reform healthcare to reintroduce market forces. I'm in 100% agreement with him on that general principal. There are a bazillion ways one could actually do this, and picking one would make an interesting public debate. But...I'm afraid that politically any such plan is dead on arrival. Americans have gotten used to their healthcare system, and they like the open-ended nature of it. Why wouldn't they? And, unfortunately, the vast majority of Americans do not understand that our current system is headed inexorably toward a very painful collision with the wall of economic reality...
Posted by Unknown at (permalink) 3:39 AM 1 comment:

Guess Who Gets the California IOUs? 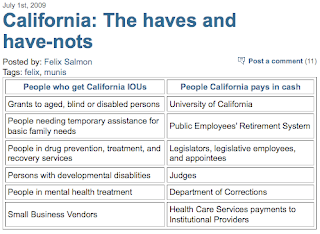 Felix Salmon (Reuters) offers this handy chart (click to enlarge) of who California will “pay” with IOUs and who will get cash.

There seems to be a 100% correspondence between cash payments and politically connected groups, and no application whatsoever of common sense or morality. Our overlords have decided that instead of funding the genuinely needy with California's tight cash, we're going to fund government workers' pensions – that would be those same government workers that spent their way into this mess.

Where is the justice in this?

Here's my suggestion for justice:

Rope (lots of it).
Trees (Muir Woods would make a nice spot, wouldn't it?).
Politicians (all of 'em - let's start over!).
Some assembly required (easy stuff, folks – just a few basic knots).

Posted by Unknown at (permalink) 3:24 AM No comments:


What this all means, I don't know. All I know is that I certainly never expected, a mere six months into the Obama administration, to see the press doing anything other than kiss Obama's butt – especially Helen Thomas...