Geek: the simplest things ... can be so complicated sometimes.  What could be simpler than a String?  BTW, Dr. Kabutz's email newsletter is an excellent resource for anyone interested in Java's performance or its nether regions.  You can subscribe for free.  I've never taken one of his courses, but I'll bet they're pretty darned good...
Posted by Unknown at (permalink) 8:09 AM No comments:

Holy cheap (solid-state) bits, Batman!  Just read this piece about a new line of cheap SSD drives from Toshiba.  Looked them up on Amazon, and sure enough: they're selling for just 37¢ per gigabyte.  That's kind of mind-boggling for an ancient and venerable geek like me, who bought his first brand-new hard drive at the price of $240,000 per gigabyte (that was for a Quantum 10MB disk at $2,400).

The volume difference is kind of amazing, too.  The Toshiba SSD packs 980GB into 3.28 cubic inches.  Those Quantum 10MB disk were 440 cubic inches each, and I'd have needed 98,000 of them to equal that Toshiba disk's capacity.  That would be a total of 43,120,000 cubic inches, or roughly 25,000 cubic feet – a cube 30' on each side solidly packed with disk drives.  You'd have to have a specially reinforced floor to hold that weight, and I don't even want to think about the power bill.  Those old hard disks failed quite often, so I suspect I'd have to employ a couple of people just to replace the failed units.

Here's the real kicker, though.  I'm ancient and venerable enough to remember my own reaction upon seeing those Quantum disk drives for the first time.  It was approximately the same as my reaction to these Toshiba SSDs :)  How can that be?  Well, consider this.  The first storage device that I ever encountered, during my U.S. Navy training in the early '70s, was a “high speed” mercury acoustic delay line memory system. I also worked on magnetostrictive delay line memories, described in the same article.  If I remember correctly, the mercury delay machine had 512 18-bit wide words.  That machine was the size of a couple of large refrigerators, and it weighed perhaps three tons.  By comparison to that machine, those Quantum hard disks were just as amazing then as the Toshiba SSDs are today...
Posted by Unknown at (permalink) 8:00 AM No comments:

Quote of the day...  Spotted in the Ricochet Daily Shot:


“Those people who think they know everything are a great annoyance to those of us who do.”

When I was a young lad, lo these many years ago, Asimov was one of my favorite authors.  I first ran into him with his science fiction, but a high school librarian mentioned to me one day that he also wrote a lot of non-fiction (which the library had).  That started me on a binge reading of his books on science, math, and technology – a fantastically accessible body of work that played a major role in developing my interest in those topics.  His books were perfect for someone like me who found the classroom too slow and basic, but who didn't have the background at the time for college texts.
Posted by Unknown at (permalink) 7:27 AM No comments: Perfect pictures...  Bored Panda has a collection...
Posted by Unknown at (permalink) 7:18 AM No comments:

A cheerful morning in Paradise... 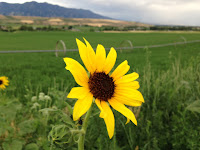 A cheerful morning in Paradise...  How can you help but smile when you see a sunflower in bloom, like this one that we saw on our walk this morning (at right)?  These sunflowers are common around here.  I don't know if they're natives, escapees, invaders, or something else – but they show up mostly at the edges of cultivated fields.  They're a bird magnet for any seed eaters.  A few weeks from now, these things will be covered by goldfinches and house finches, and probably magpies, too. 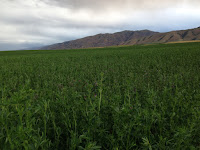 On the way up the hill this morning, we had nearly perfect lighting for photography: a perfectly diffusive layer of clouds giving us even omnidirectional lighting.  No shadows, and everything lit up.  That's how I got this photo of a sea of alfalfa.  This field was cut just two weeks ago.  Since then it's been irrigated twice and rained on twice, and there were about 10 sunny days.  That is apparently the recipe for luxurious 2' tall alfalfa!  There are going to be some happy moo cows at Clausen's dairy later this year (the Clausens lease this field for hay).

While looking at one of the sunflowers along the road, I spotted this yellow jacket (wasp) at right.  Look closely at it and you'll see that its wings have been clipped.  I've seen this before when a bird attempts to eat the wasp before it realizes what its grabbed.  I didn't see it happen to this one, but that would be my best guess.  It's doomed, I'm sure – I can't imagine that it could grow those wings back out (if that even happens!) before it starves...
Posted by Unknown at (permalink) 7:14 AM No comments: