Seventy-seven solar companies.  That's how many have gone bankrupt, were acquired in a fire sale, or just went out of business since 2009.  Many of these got federal subsidies or loans, some of them hundreds of millions of dollars.  What an incredible, epic fail!  You'd think this would be at the front and center of our national conversation on energy, but instead it seems to be largely unknown or forgotten...
Posted by Unknown at (permalink) 12:38 PM No comments:

Not every college student or teacher is taking their progressive indoctrination lying down.  Jason Morgan is a Ph.D. candidate at the University of Wisconsin, Madison.  He's also a teaching assistant, a post which requires him to attend certain trainings.  At the first of these, he was called a racist – and was told that the next one taught something called “genderqueerism” that conflicts with his religious beliefs.  So he wrote an open letter to the graduate school's director and a number of news outlets.

The letter is awesome.
Posted by Unknown at (permalink) 12:33 PM No comments:

Is a law the right way to approach this?  The last few years I was working and hiring software engineers, I routinely checked social media (Facebook, Twitter, etc.) to find out a bit more about a candidate.  A significant fraction of the younger candidates would have things publicly posted on social media that seemed quite inappropriate in a business setting.  These ranged from rants about former employers, to personal comments about other people, to nude, raunchy, or even incriminating photos and videos of themselves and others.

I think there are two interesting questions here.

First, is this phenomenon actually a problem?  Such behavior certainly can affect a person's future employment and personal life.  If you were an employer, would you knowingly hire a young woman who bragged on Facebook about offering (and having) sex with former boss to avoid being laid off?  Or a young man who posted a video of himself sniffing a line of cocaine?  Or another young man who had tweeted vile anti-Semitic rants about his former co-workers?  All of these are actual candidates I interviewed, and I hired none of them – because I saw these social media postings, and decided that they showed me enough about the candidate for me to say no.  Is that actually a bad thing?  In another case, I had a woman in her late 20s apply who had posted several photos of herself on Facebook, topless at a beach in Brazil.  Those photos didn't indicate anything dangerous or unsavory about her, so I let her go through our normal hiring process.  We didn't end up hiring her, but those photos weren't the reason – we just didn't think her skills matched our needs.  So while some might consider those photos inappropriate, they didn't affect her chances on being hired by my company.  So what is the problem?  It seems to me that these postings are just another source of information about a candidate for an employer, one that – just like every other source – must be used carefully and cautiously to help make a hiring decision.

The second question is whether a new law is the right way to deal with this, if you believe it is a problem.  California (of course!) just passed such a law.  I haven't read the law myself, but if the linked story is accurate the law requires social media sites to let people know they can erase information (including posts, photos, etc.), and it requires them to provide a way to do so.  That's about the least-objectionable way they could have tried to handle it, and while I'm a little uncomfortable with any law about this, I don't have a strong objection to it.  I can imagine much worse laws, though – just imagine what Bloomy might do with this...

But then, I'm not inclined to think there's a problem here in the first place...
Posted by Unknown at (permalink) 8:58 AM No comments: I just bought a hard-cover book - the first one in about three years.  Mind you, I get lots of books (Amazon loves me :), but for several years now they have been almost exclusively eBooks...

So why now?  I just read about an interesting book: 100 Diagrams That Changed the World, and it's not available as an eBook.  Most of the time when that happens, I just wait for the eBook to come out, and it generally does fairly quickly.  But this one – full of diagrams like the 4004 block diagram at right – will likely never be out on eBook.  So I broke down and bought a “real” book.  It feels weird...
Posted by Unknown at (permalink) 8:23 AM No comments:

It's the batteries, stupid – but this is still pretty cool: a new record for solar cell efficiency, at 44.7%  This is a specialized cell, designed for use in a system that concentrates sunlight with lenses or mirrors.  The record-setting measurement was made at a concentration of 297 suns.

But until we have a reliable, cost-effective way to store power for nights and cloudy days, photovoltaic systems are going to be relegated to marginal uses.  Several of my neighbors have gone off-grid with photovoltaic systems, but their experiences are uniformly bad: very high costs and disappointingly low reliability, both primarily functions of their battery systems...
Posted by Unknown at (permalink) 8:14 AM No comments:

Crony capitalism at work: the political clout of traditional car dealers is keeping Tesla from selling it's cars directly to Texas consumers.  The source of that clout?  Cash.

We're stuck with this sort of crap unless we miraculously acquire a lot more voters who care, and who inform themselves.  None of this is secret, or even hard to discover – not the fact of the cash donations, not the recipients of the cash, and not the votes of the recipients. Despite this, the bought-and-paid-for “representatives” keep getting re-elected.

Like a wise man once said: democracy is the worst form of government ever devised, except for all the others...
Posted by Unknown at (permalink) 8:07 AM No comments:

Back in the '90s and '00s, I traveled quite frequently to Europe, most especially the Baltics, Scandinavia, and Eastern Europe (including Russia).  After a few years experience, I noticed that I could fairly reliably tell what area someone hailed from – especially women – just from their facial appearance.  What makes this especially interesting for me is that I have a lot of trouble recognizing (and remembering) individuals by their face, but the patterns of heritage aren't difficult for me at all.  Our human ability to swiftly detect subtle differences in faces, while variable, is really quite amazing...
Posted by Unknown at (permalink) 7:57 AM No comments:

Earthquake in Pakistan creates a new island.  Seismologists suspect it's just a “mud volcano” – a temporary formation caused by jets of mud and gravel spurting from underwater fissures.  More photos here...
Posted by Unknown at (permalink) 7:35 AM No comments:

California, leading again...  Modoc County joined Siskiyou County in voting to secede from the state.
Posted by Unknown at (permalink) 7:31 AM No comments:

A three-fer!  James Taranto, in Best of the Web Today (his regular Wall Street Journal column), has a three-fer in today's column:

Uh oh - this doesn't quite fit their narrative: Josh Bernstein, writing in the Examiner, has a piece pointing out a fact that that nanny-statists would really rather you didn't know:


Since 1950, almost every single public shooting in the United States in which more than three people have been killed have taken place in what are commonly known as “gun free” zones.

My home – and the conservative-leaning rural community we live in – is most definitely not a gun-free zone...
Posted by Unknown at (permalink) 7:17 AM No comments:

Slow motion video compilation...
Posted by Unknown at (permalink) 7:11 AM No comments:

“Internet of Things” - the components are starting to appear...
Posted by Unknown at (permalink) 7:06 AM No comments: 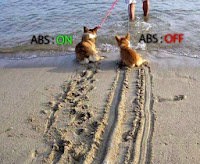 A visual explanation of ABS: (anti-lock braking system), via reader Simi L...
Posted by Unknown at (permalink) 7:05 AM No comments:

The One's Prayer:  Via my lovely bride...


Obama Is the shepherd I did not want.
He leadeth me beside the still factories.
He restoreth my faith in the Republican party.
He guideth me in the path of unemployment,
For his party's sake.
Yea, though I walk through the valley of the bread line,
I shall fear no hunger, for his bailouts are with me.
He has anointed my income with taxes,
My expenses runneth over.
Surely, poverty and hard living will follow me all the days
Of my life, And I will live in a mortgaged home forever.

Well, except for that bit about the Republican Party...
Posted by Unknown at (permalink) 7:02 AM No comments: