One Hundred Years Ago...

June 10, 1912, in Villisca, Iowa, a family of six plus two other children were killed by an ax-wielding murderer.  At that time and in that area, such crimes were “unheard of” – people didn't even lock their homes.  Nobody was ever convicted of the crime.

The story of the murder's investigation is fascinating, involving religion, ineptness, crazy people, and more.  Also interesting: this may have been just one of several similar murders by the same murderer – in other words, a serial murderer.

Reading this story reminds me of something I've read several times in serious historical works: as best anyone can tell, the rate of such horrifying murders has not increased over the years (though the lethality certainly has, with modern weapons), despite the nearly-universal believe to the contrary.  Really!  The number of such crimes being reported and solved has definitely increased, but historians believe this is entirely due to increased communications around the world and vastly improved criminal investigations.  Consider a serial murderer in, say, 1800, who traveled for a month or so between murders.  Two towns in the U.S. in 1800 that were a few hundred miles apart would quite likely never even know that each other had experienced a similar murder – and even if they did find out, it would be long after the fact and long after any investigation.  Two and two would simply never have been put together.  The world before about 1920 or so was a much safer place for serial murders...
Posted by Unknown at (permalink) 7:21 AM No comments:

Venus on the Edge... 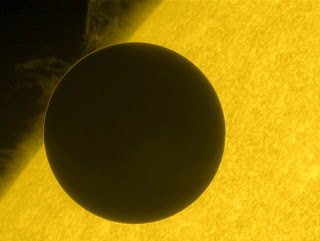 A few days ago we had the rare transit of Venus across the sun (as seen from Earth, of course).  This image, captured by the Hinode spacecraft, a joint Japanese/U.S./U.K. mission.  It is in orbit around the Earth, so it saw the transit of Venus just as us surface-dwellers did.

This image shows Venus just as it crossed one edge of the sun.  If you click on the photo to enlarge it, you can clearly see a bright ring all the way around Venus – sunlight refracting through Venus' carbon dioxide rich atmosphere.

An Alzheimer's vaccine looks good in its first trial.

As the good Instapundit would say: faster, please!
Posted by Unknown at (permalink) 6:53 AM No comments: