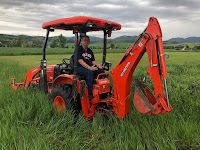 A really nice visit...  From my old friend Mike B., that is.  One of the few things he actually asked to do on his visit was to drive my tractor and operate the backhoe – so naturally, that was one of the first things we did.  The very first thing we did with him is to grab lunch at the Red Iguana in SLC.  That's Mike at right, digging a harmless hole in our field. :)  He seemed to greatly enjoy that!

I first met Mike while we were both in the Navy, in 1974 or 1975.  He was a Master Chief Electronic Warfare Technician, a much higher enlisted rank than I had (Second Class Petty Officer) and a completely different rating (I was a Data Systems Technician).  His training was all in analog electronics, radio and microwave.  Mine was entirely in digital technology, though I had also been a ham radio geek and knew a fair amount of analog and radio electronics.  Mike had gotten very interested in some of the earliest hobby computers (specifically the Imsai and Altair computer kits) and was seriously considering buying one – but the whole notion of programming was completely foreign to him, and he was looking for help on it.  Neither of us can remember at this remove exactly how he got introduced to me.  Our paths would normally never have crossed on the ship, but somehow he found out that there was a decidedly not squared-away DS (me) down in the bowels of CIC who actually knew something about programming.  I was self-taught, but was at the time doing some reasonably difficult programming for the NTDS system that I also maintained the hardware on.  However it happened, Mike and I started talking about hobby computers.

It's no exaggeration to say that that introduction changed the course of my life.  I've no idea what would have happened in my career had I never met Mike, but I'm certain it would have been very different.  Because of our friendship, I got (heavily) involved in the hobby computer scene.  In short order I was designing and building not only general purpose computers, but also specialized systems that incorporated early microprocessors like the Z80 (especially), 6800, 6502, and 1802.  That hobby experience (including writing the associated code) led very directly to my professional career in electrical engineering and software engineering, which started even before I mustered out of the Navy.  Because of that, I never went back to college (as I'd once intended) – instead launching directly into the kind of work I'd thought I could only do if I first graduated from college with an engineering degree.  A cascade of interesting life experiences derived from that career course.  Knowing Mike most definitely changed my life!

Mike now lives in North Carolina with his wife and a slew of relatives-by-marriage.  That's sufficiently distant that I don't see him very often, though we're in touch on nearly a daily basis.  This visit of his was the first vacation he's taken in 15 years from his job as a full-time truck driver.   He hasn't been west of the Mississippi in an even longer time.  He hadn't flown on a commercial airliner since the '80s (though he is a fixed-wing, helicopter, and gyrocopter pilot).  This trip was a big adventure for him!

After the tractor play, we took Mike on a slow drive through Blacksmith Fork Canyon, just seeing the sights and looking for wildlife.  The rugged and geologically young mountains were a treat for him – I thought he was going to hurt his neck as his head swiveled around.  :)  We went in our Model X, which Mike really enjoyed.  Like most people, he was surprised by the power, quiet, and grand view.  He was also surprised that we'd take that car on a rough dirt road. :)

Later that afternoon we had my brother Scott over, and we all had a steak dinner that Debbie made.  Salad, asparagus, steak, and baked potatoes – about three times as much food as any of us could eat (though Mike somehow managed to eat his entire steak).  After that we basically all fell asleep.

The next day (yesterday) turned out to be a grand adventure.  The first stop was a 100 year old hydroelectric plant owned by the city of Hyrum.  The plant supplies a half megawatt of power, tied into the grid.  We toured this plant last year (but not with Mike) when it was down for a long time for maintenance.  This time the plant was operating, with newly updated control systems that we'd never seen before.  Mike, of course, had never seen any of this before.  Even better, on this tour it was just Mike, Debbie, and I – and our guide, city employee Heath C. (in the last two photos below).  Heath owns a piece of land just a short distance from our home, and we've gotten to know him over the past year or so.  He was a great connection to have!  The first photo shows the pipe bringing water from higher up at a dammed-up pond.  If you embiggen that photo and look closely at it, you can see the feed line heading off to the right, and above it a vent (to prevent ram pressure from a sudden valve closure or clog from bursting the pipe).  That vent is just above the height of the dammed pond, which appears to be roughly 50' higher than the power plant.

The next five photos show the interior of the power plant.  When we walked in, Heath shut down the plant (stopping the turbine) to make it quiet enough to hear each other.  The fact that he shut down the plant just for us really impressed Mike. :)  In the first of these five photos you see the half-megawatt AC generator.  The second of them shows the turbine.  The radially-arranged levers control the “wicket gates” that allow water into the turbine blades.  Their position is constantly adjusted by the control system to keep the speed of the turbine constant (the right speed to produce a 60Hz output).  The third of the five is a closeup of the brushes on the AC generator.  The fourth shows both the AC generator (the big cylindrical device) and the 10 KW DC generator (the smaller cylindrical  device to the right of the AC generator).  The last of them shows all three units: left-to-right, turbine, AC generator, and DC generator.  All of them share a common shaft.  Mike and I spent more time on the DC generator than anything else, as it had more mysterious construction.  We finally figured out that its' many-bladed commutator was basically a mechanical rectifier – this thing was so old that solid-state rectifiers didn't exist at the time of its design!  We also figured out a modern addition – a tachometer that worked by using a Hall-effect sensor to count the teeth on a now-disused gear.

The last thing we did in the plant was to watch as Heath restarted the turbine, got it up to speed and synchronized with the general electric grid, and heard the big “clunk!” as a relay engaged and brought the plant back on line.

After that we followed Heath up to the dam (a quarter-mile or so upstream on the river) as he went to do the daily grate maintenance.   The geological survey marker is on the top of the dam, which as you can see is at 5,231 feet altitude.  The last three photos show the grate that filters the water entering the top of the pipeline that feeds water to the turbine.  Heath told us that someone is up there daily to clean the grate off, using a homemade tool that's basically a garden rake with a long handle.  There was quite a bit of plant life stuck on that grate from just the prior day.  Heath tells us that it's not uncommon for them to find fish and animals stuck there as well.

After that we followed Heath down to the remains of a lower dam, one that was demolished some time ago.  From what we could see, it appeared to be considerably bigger than the remaining dam.  The old pond bottom is now covered in lush growth of grass and willows – quite pretty.  At that point we said a hearty “Thank you!” to Heath, and he took off to spend some time with his wife and two boys. 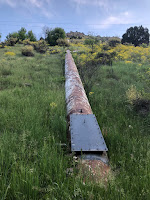 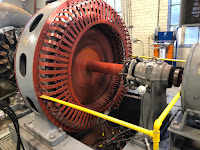 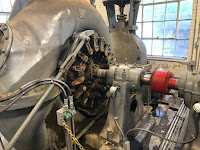 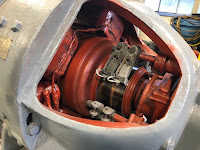 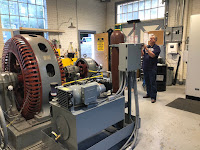 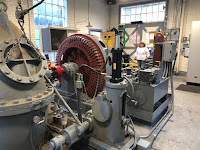 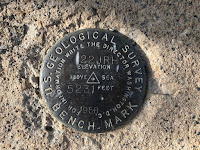 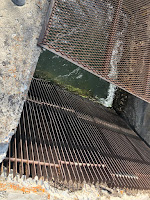 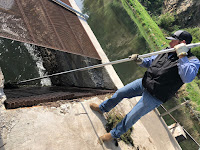 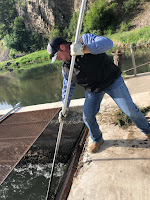 After that, Debbie remembered that the little Paradise Museum was supposed to be open on Memorial Day, so we wandered down there.  In our four years here, we had somehow managed to miss the times it was open – it's within easy walking distance of our house, be we've never been there!  A couple of local ladies were there to answer our questions, which we had lots of – as quite a few of the artifacts in there we couldn't identify.   For instance, in the second photo below, the wooden-cased device on the right turned out to be a mechanical corn husker.  Mike knew what the left hand device was: a cream separator.  I had no idea!  When it was obvious how interested we were in all these things, one of the museum ladies offered to take us on a “secret tour” in the basement, which of course we took her up on.  There were several interesting things down there, but to me the most interesting thing was the basement walls: hand-dressed stone, competently laid.  The building that houses the museum was formerly the bishop's tithing house, built in 1902.  We also saw a Victrola in working order, but with a broken wooden lid.  I offered to mend the lid for them, and they took me up on it – so sometime next month I'll fix that up for them.  The basic problem is that the piano hinge for the lid has all its wood screws stripped out of the lid.  I'm going to drill those holes out, plug them with walnut plugs, then reinstall the original screws.  It shouldn't be very hard, and it should fix it right up. 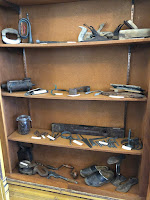 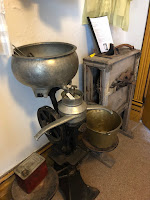 After that we headed out on a meandering drive through Young Ward (to see the bison there), then up through Newton, up to Clarkston, and over the mountains to the west.  On that mountain drive we saw some good flowers (below).  Then we headed down to The Grille restaurant where we knew the meat-heavy menu would appeal to Mike.  It did – Mike was goggle-eyed as he read over the menu.  He eventually settled on a “Cabo burger” with chipotle sauce and roasted jalapenos.  Debbie had a pulled pork sandwich, and I had a pulled-pork burger (basically a pulled-pork sandwich on top of a burger).  Excellent in all cases.  Stuffed, we meandered our way over to the Aggie's creamery with the intent of getting an ice cream cone.  The line was out the door and halfway to the parking lot, so we abandoned that idea and headed instead for Macey's grocery store where they sell Aggie's ice cream in boxes (and no lines!).  Mike was awed by the size of Macey's – which doesn't seem that large to us.  We headed home where Debbie served us up around a quart of ice cream each, after which we painfully headed for bed – early, because we had to get up at o'dark-thirty to take Mike to the airport for his trip home.  That we did this morning, with 90 minutes of fun conversation before we tossed him out the door.  As I was writing this post, I got a text from him: he's in DFW, with a one-hour layover before the last leg of his trip home. 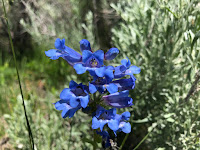 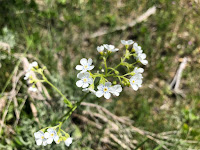 We miss him already.  We're hoping he can make it out for another visit one of these fine days...
Posted by Unknown at (permalink) 7:43 AM No comments: