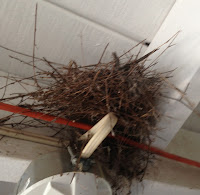 On our covered patio, just outside the door to our living room, we have a house finch nest.  The nest looks like it's about to tumble down, though some gentle tugging shows that it's more secure than it looks.  Its position just outside the main entrance to our house means that the poor mother bird is getting disturbed quite a few times a day – she flies away each and every time we use the door. 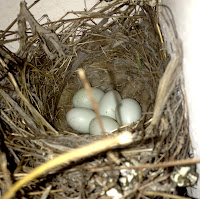 Yesterday I stuck my iPhone up there to see if there were any eggs.  To my surprise, the nest had five eggs in it.  Taken together, these eggs seem to be about the same size as the mama bird, which seems unlikely.  A little research shows they have between 2 and 6 eggs, though, so this probably isn't all that unusual.
Posted by Unknown at (permalink) 11:49 AM No comments:

Bowed, But Not Broken...

Check out the photo below, showing a small sheet of 1/2" plywood sitting in the roof rack of our FJ.  I took this photo on Monday, when we were having some rain (about a tenth inch, nothing to get all that excited about).  The sheet was perfectly flat the day before, but look at it now!

The rain hitting the top side of the plywood soaked into the wood, causing it to swell a bit.  The bottom of the plywood remained dry, and therefore didn't swell.  But the swelling is directional – the fibers of wood grow in diameter, but not in length.  The grain of the top ply of this piece toward/away from the position of the camera, so the swelling occurs in the left/right direction.  This swelling caused the bowing in the direction you can see.

Later on, the water soaked down further in the wood, to the next ply.  At that point, the piece warped a bit in both directions, making a very odd-looking piece of wood.

Today (Wednesday) the piece has dried out, and is completely flat again... 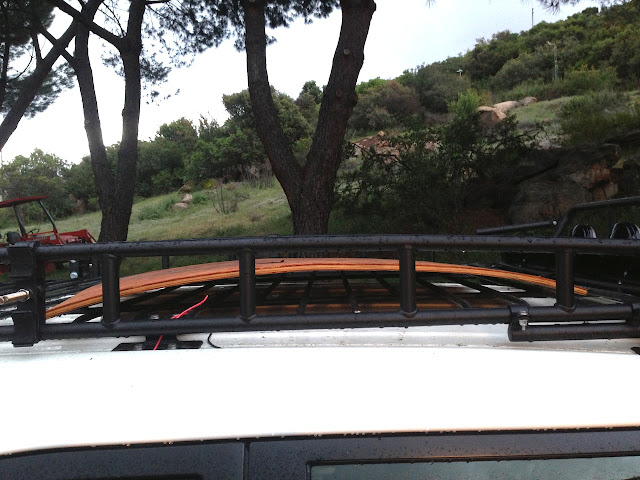 Posted by Unknown at (permalink) 11:34 AM No comments:

FJ Mods: Only When Running...

Some of the electrically-powered additions I'm making to our FJ Cruiser draw a lot of power – enough that leaving them on accidentally could easily run down the battery.  Two obvious examples: the four “headlights” I've mounted to the roof, and the 2KW inverter that I have yet to install.  To be safe (with respect to the battery) I'd prefer that these devices would only have power supplied to them when the engine is running.  Unfortunately there is no simple way to do this.  The stock vehicle does have power wires that are active only when the ignition is turned on – but that doesn't necessarily mean that the engine is running. 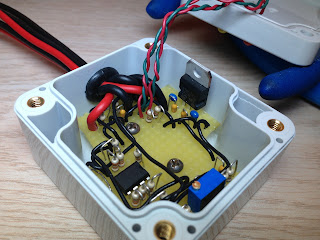 So I designed and built a little circuit to solve this problem.  It detects that the engine is running by sensing the battery voltage.  When the engine is not running, the alternator is not running, and therefore the battery voltage will be something less than 12.8 volts.  When the engine is running, the alternator is also running, and the voltage will be variable, but certainly over 13 volts (as measured in the FJ, it's generally over 14 volts.  So a simple comparator circuit, com)paring the actual battery voltage to 12.9 volts, does the job quite nicely.  The comparator's output drives a MOSFET relay driver, and the relay provides 30A that's on only when the engine is running.  Since I was going to this trouble anyway, a minor addition also provides a separate output that is on whenever the ignition is on.  This duplicates something already in the truck, but it does it with a separate relay and fuse – better than tacking it onto the stock system. 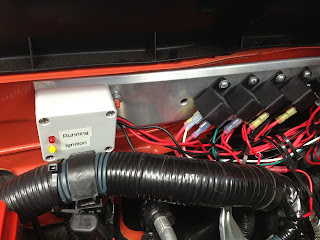 Here you see it all installed.  I put a pair of LEDs on the front, more for testing than anything else.  The relays are the four little cubes off to the right.

This simple little circuit provides a very clean way to power those “big draw” devices without worrying about leaving them on while the engine is off.  For we ancient and forgetful ones, this is very comforting :)  It was also very satisfying for me to be able to design, build, and debug an old-fashioned analog electronic circuit – it's been quite a few years since the last time I'd done that!
Posted by Unknown at (permalink) 11:24 AM No comments:

Is This Supposed to be Obama?

These “statues” of a black man and a white horse are along Japatul Valley Road, just north of the intersection with Lyons Valley Road.  The park signs are the same style as a county park, but oddly are on posts marked “private property”.  And then there's the statue, which bears a remarkable resemblance to Barack Obama.  That implies some sort of message, but we're not at all sure what that message might be.  If you google “Japatul Springs Park”, you won't get any hits showing it as a park in any jurisdiction.

There's much to be confused about here :) 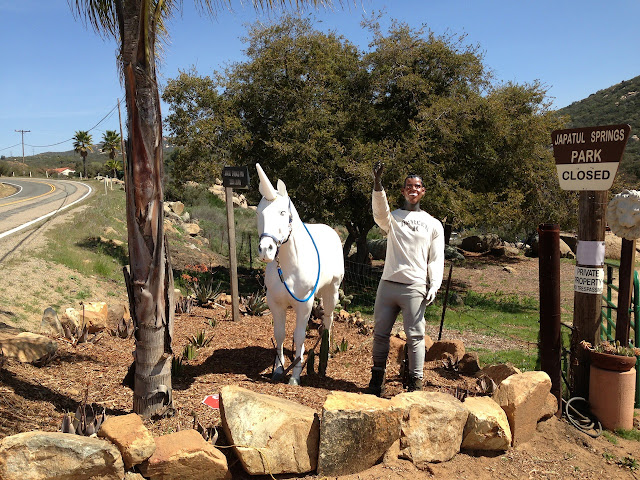 Posted by Unknown at (permalink) 11:01 AM No comments:

These People Are Just Crazy...

And there are a lot of them!

Did Life Begin Before the Earth Existed?

Two scientists have done this math, and have arrived at a date of roughly 9.5 billion years ago.  That's well before the Earth (or the Sun, for that matter) existed.

What does this mean?

One very real possibility is that the scientists are mistaken for some reason.  After all, they don't have any direct observational evidence for this date, just the extrapolation of a hypothesis – very weak ground to rest a theory on.

The other possibility is that they are correct, and that would mean that life originated before the Earth did – and that the Earth was “seeded” with life through some mechanism (comet collisions are a frequently cited candidate).

It's an interesting ponder...
Posted by Unknown at (permalink) 6:51 AM No comments: