Our man-killing window holes are now covered...  And very nice-looking they are! These are the two covers that we traveled to Kalispell, Montana to pick up.  My brother Scott helped me install them today.  Both of them fit perfectly – another outstanding piece of work from the wonderful folks at Lazy K Wrought Iron! 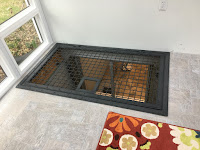 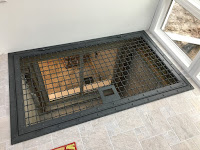 Posted by Unknown at (permalink) 1:55 PM No comments:

I don't think I'll go out of my way to try this particular delicacy...

I don't think I'll go out of my way to try this particular delicacy...  Even though it's seafood, which I love.  Because it's fermented for six freakin' months, and I don't have to try that to know that I don't love it.

This stuff is from Sweden, it's called surströmming, and here's more than you ever wanted to know about it.  Watching the video is enough to convince me that Sweden should be quarantined from the rest of humanity, permanently.  First Volvos, then Abba, now surströmming?  That's three strikes, and they should be out!
Posted by Unknown at (permalink) 11:08 AM No comments: 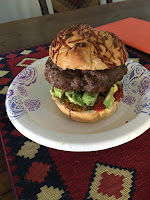 Paradise ponders, burgers and Foyle's edition...  We had kind of a lazy day yesterday.  I finished some chores in the house, built the second rib for the stairs, and then came inside for our afternoon meal: burgers.  That is, I had a burger (at right).  That's 3/4 pound of Macey's 85/15 burger (all that fat makes it delicious!), on a Macey's Asiago-and-onion roll, with avocado, ketchup, and sweet pickle relish.  Yum!  Debbie made her share of the ground beef into an enormous taco salad, low in sodium but apparently very tasty, as she ate the entire (gigantic!) thing.

After that meal we were so full that any resembling ambition flew off to an obscure country in southwest Asia.  So we crawled upstairs (slowly and carefully), and watched the last three Foyle's War episodes in a binge.  That's five hours of television, something I haven't done for decades.  The very last episode is a real shocker, ending with (literally) a big bang.  We're kind of sorry to be done with it.  But no matter, at our age we'll probably forget all about it within a few weeks, and can start it over as though it were brand new to us. :)

Today's big project for me is to help my brother Scott with his taxes.  I finished mine last week, except for the filing.  Doing my taxes never fails to put me in a bad mood, but the trip to Montana immediately following really helped pick me up.  In the future, I'm going to have to plan something nice for the few days immediately following tax prep.  It will help tamp down the anger I can't help feeling as I watch my hard-earned dollars being stolen by the government so they can waste it on something I don't believe in.

Before my brother gets here, I'm working on the stairs project.  I did an hour or so of sanding before I came up to write this post, and I'll probably go do some more in a little while.  Sanding is amazingly relaxing, and it's very good arm exercise. :)
Posted by Unknown at (permalink) 5:47 AM No comments: