Paradise ponders, almost single digits edition...  As I write this, the temperature outside is 10.1°F; it's clear and the sky is full of bright stars.  My walk out to the barn at 5 am was a veritable crunch-fest – the snow remaining on the driveway had partly melted and then refroze in the cold night, turning the powdery snow into something like a fluffy ice cube.  I ventured outside onto our deck in just my shirtsleeves; it didn't really feel all that cold to me.  Acclimated, I am becoming... 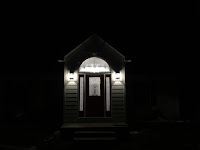 Yesterday I got the lighting in the mud room all wired up and tested.  It all worked on the first try, amazingly enough.  The photo at right shows what our home's new entrance looks like at night, with both the chandelier inside the mud room and the lights outside turned on.

This lighting was just a bit trickier to wire up than you might think, because there is a feature we wanted that complicates things.  We wanted the outside lights to come on under either of two circumstances: when motion is detected outside, or when the interior chandelier is on.  We did not want the interior chandelier to come on if motion was detected – only if the switch was turned on.  Making this work required a double-pole, single-throw (DPST) relay.  The relay is energized when motion is detected.  When there is no motion detected, the outside lights are connected to the chandelier's switch.  When there is motion detected, the outside lights are connected to power.  Simple enough, but more complicated than a simple switched light.

Back in October, when the county inspector came out to check over the mud room's electrical work, this relay circuit was the subject of an amusing (for me, anyway) conversation.  The inspector had a basic idea of how a relay worked, but had never seen one used in a building.  He didn't know if there were any code requirements.  I showed him my circuit diagram, and he was completely lost.  Out loud he said that he didn't know any basis on which he could either approve or disapprove the work.  He asked me if I knew what I was doing. :)  I had mounted the relay inside a standard 4" utility box; other than the relay itself everything about the installation was bog-standard.  So, desperate to move the inspector past this obstacle, I pointed out that the relay was UL-approved.  “Well,” said the inspector, “that’s all right then!” – and with that we were approved.

That made me curious, and I did some research into the building code myself (it's all online here, so that was easy).  I found just one reference, where it was mentioned (but not clearly mandated) that the relay be mounted in a metal box (I had used plastic).  I found no other mentions.  I'm guessing, therefore, that the use of relays in construction is really rare.  I'm surprised by this, as using relays in home construction could save a lot of copper wire (by running power straight to fixtures and outlets, instead of out-of-the-way through switches.  The U.S. Navy used this technique extensively on the ship I was stationed on (and, I presume, in other ships as well).  Their implementation was actually pretty clever: the circuit breakers in the central panel doubled as SPST relays; they were controlled by low-voltage switches connected by relatively tiny wires.  I could easily envision a modern equivalent where the circuit breaker/switches were controlled digitally and the switches using RF instead of wires.  How convenient that would be!
Posted by Unknown at (permalink) 5:28 AM No comments: