Hint: bcrypt is involved...
Posted by Unknown at (permalink) 4:36 AM No comments: 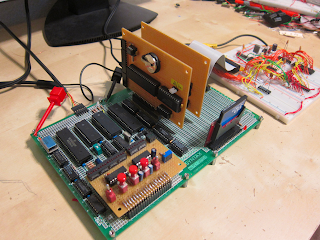 This is cool, but those of us of a certain age have been there, done that, before.  For that young feller, building a computer from scratch with a microprocesser is an exotic affair.  For me (and many others) in the late '70s and early '80s, it was the norm.  I've designed and built dozens of these – and that's not bragging, that's just the way you did things back then.

There's a further step I'd love to take.  It's been on my “to do” list ever since Don Tarbell showed me his home-brew 8 bit computer back in the late '70s.  He didn't start with a microprocessor chip – he started with a blank sheet of paper and a TTL parts catalog.  He designed the instruction set, the CPU architecture, and every logic gate in the entire thing.  The result was something that would (barely) fit on a table-top, and operated at a speed that would be most unimpressive today – but it was all his design, from the instruction set on up.

I want to do that.  And someday, I will.
Posted by Unknown at (permalink) 4:35 AM No comments:

This reminds me of the stories about the Clinton team trashing the White House as they left office.  The lead from this story in today's WSJ:


The 111th Congress began with an $814 billion stimulus that blew out the federal balance sheet, so we suppose it's only fitting that the Members want to exit by passing a 1,924-page, $1.2 trillion omnibus spending bill. The worst Congress in modern history is true to its essence to the bitter end.

Think of this as a political version of the final scene in "Animal House," when the boys from the Delta frat react to their expulsion by busting up the local town parade for the sheer mayhem of it. Bluto Blutarsky (John Belushi) did go on to be a U.S. Senator in the film, and a man of his vision must have earned a seat on Appropriations.

Democrats have had 11 months to write a budget for fiscal 2011, which began on October 1. But Majority Leader Harry Reid and Appropriations Chairman Daniel Inouye have dumped this trillion-dollar baby on Senators at the very last minute, when everyone is busy and wants to go home for the holidays. No doubt that was the plan. The continuing resolution to fund the government expires on Saturday, so Mr. Reid wants to squeeze Senators against the deadline. And with the press corps preoccupied by the tax debate, the spending bill is greased to slide through with little or no public scrutiny.

Disgusting, ain't it? Read the whole thing; I promise, you'll be even more disgusted...
Posted by Unknown at (permalink) 4:27 AM No comments:

Posted by Unknown at (permalink) 4:22 AM No comments: