Bad news in Paradise...  Our vet phoned this evening to tell us the lab results on the tissue she removed from Koa last Thursday: they got a definitive diagnosis -- it's an osteosarcoma.  That's an aggressive bone cancer, malignant and usually metastatic.  When it's not in a limb or digit (as with Koa), there is no treatment with even a reasonable chance at a good outcome.  This is a fairly rare cancer in cats, rare enough that our vet has never seen it before.  She's going to do some research on it, but ... we're not expecting good news.  It seems likely we'll be doing palliative care for him, treating his pain and any secondary issues as long as we can.  We'll buy him what time we can, but we won't let him suffer.
He's actually looking pretty good at the moment, better than he has for a few weeks now.  We've isolated hom, and he's getting lots of attention, a heated bed, and all the kitty junk food he wants...
Posted by Unknown at (permalink) 7:20 PM 2 comments: 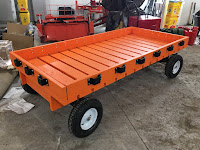 Progress in Paradise...  That may not look like all that much at right, but it represents a whole bunch of progress.  As I write this, I'm pretty much wiped out, physically, from the effort it took to get to this point today :)

The first task came before I mounted the wooden platform (the orange thing) onto the steel frame (the part with the wheels).  I'd already assembled and aligned the frame, but I never had aired up the tires or greased all the (numerous) points that need it.  There are 8 zerc fittings plus a couple dozen exposed metal points where good old-fashioned grease was needed.

I figured I'd do the easy part first: the zerc fittings.  Little did I know how much work that was going to be!  I used up all my grease (about a half tube) on the first zerc fitting.  I have a pneumatic grease gun, so that took about 15 seconds.  Off to Tractor Supply I went to pick up a couple tubes of grease.  When I got there, I found them on sale for half price, so I bought eight of them.  Good thing I did – I went through four entire tubes before I filled those fittings.  There must be huge grease reservoirs inside the wheels.  That's a good thing, I guess, but I was sure surprised!

Then came the time to mount the wooden platform onto the frame.  That platform weighs around 160 lbs., more than I can maneuver by myself.  It started out up on sawhorses, as you've seen on previous posts.  I roped it to my hoist and lifted it up, then positioned the frame under it and lowered it back down.  The job of getting it exactly in the right place while lowering it the last little bit was made especially challenging by the fact that the control for the hoist was 15 feet over my head, in the loft.  I ran up and down the stairs about 20 times before I finally had the thing in position, about 1/2" above the mounting holes.  Then all I had to do was lift the frame slightly and slip the bolts into place.  That sounds easy when I write it like that, but it was actually quite a challenge: heavy parts that needed to be held to within 1/16" or so of the right place while inserting the bolt with my “free” hand.  That part would have been a lot easier with a couple of helpers :)

The cart rolls around very nicely.  All the sides are built (I forgot to take photos of that event), and tomorrow they're going up on sawhorses to be painted.  Then I'm done!
Posted by Unknown at (permalink) 3:31 PM No comments:

“I hate to say something that ugly...”

Things you don't expect to hear...

Things you don't expect to hear...  I listen to NPR sometimes to get a better understanding of progressive views, so you don't have to.  On the way back from an errand this morning (picking up grease from Tractor Supply!), I heard an NPR reporter named Alina Selyukh giving a report about the Apple/FBI brouhaha over the terrorist's phone that the FBI wants to unlock.

So what's unexpected about that?  Here's what: her report was cogent, accurate, and very much on point.  One example of the unexpected excellence: she spent a bit of time discussing some of the speculation on the nature of the outside (i.e., non-Apple) help that the FBI is getting to unlock that phone.  She listed several methods, some of which required physical access to the particular phone (hardware-based methods) and some of which did not (exploits of software vulnerabilities).  Alina then talked about how the methods requiring physical access really don't impact our personal security (for our own iPhones) nearly as much as the software vulnerabilities do.  That's a distinction that's obvious to a technologist, but not to many people, and Alina did a great job navigating that with easy to understand language.  Her whole discussion, in fact, was completely jargon-free.

Kudos, Alina!  That was a very nice job.  And you've just enticed me to follow you on Twitter – and I have to tell you that's the very first time I've even been tempted to follow someone on NPR.
Posted by Unknown at (permalink) 8:20 AM No comments:

Paradise pictures...  This is what it looks like right now.  Left-to-right: looking out our back door, out our front door, and the pile of snow on the front porch (which I'm about to go shovel).  Sheesh... 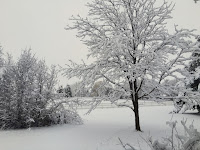 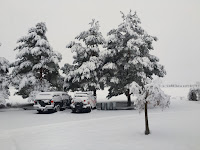 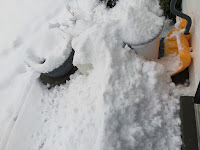 I've worked with (young) people who didn't believe me (until I showed them via Google) when I told them that computer screens used to work by shooting electrons through a vacuum to strike phosphorescent material that glowed.  These were cathode-ray tubes (CRTs), familiar to anyone over about 30 years old – but literally museum pieces today.  Those CRTs seemed magical to us in the '70s, when they started to replace teletypes as the human interface to computers.  At first CRTs were only monochrome (e.g., black & white), then in the '80s full color CRTs started to become common.

Those CRTs were far from perfect.  The displays were a little fuzzy, the devices were large, heavy, and power-hungry, and the fidelity near the edges was notably worse than in the center.  Still, they let us put text and pictures on a screen, and they were way better than those damned teletypes.

Then the flat liquid crystal displays came along in the '90s.  They got better and cheaper very quickly, and in the blink of an eye they totally replaced CRTs.  They're smaller, lighter, sip electricity, and (best of all) their fidelity is darned near perfect.  The fuzziness is gone ... text is crisp and clear from edge-to-edge.  Lines are straight.  The screen is flat, not curved.  They are so much better than CRTs that nobody cried when CRTs went the way of the dodo.

And then ... these nuts go to a whole bunch of trouble to make a video game played on a modern flat screen look like the very imperfect CRTs.  Because nostalgia, or something less charitable.

And here I am remembering how magical it seemed the first time I saw a teletype printing computer output.

Mind, blown!  This is one of the coolest things I've seen in a long time.  As Will Smith says: I gotta get me one of these!  The magnetic viewing film is available today from Amazon (at that link) and it's quite inexpensive; I just ordered myself a piece.  The latch magnets are on backorder at the moment, but I placed my order.

The engineer in me wants to know how they print these things.  From the speed and the fact that they're doing it on rare earth magnets, I'm thinking that they somehow reorient the fields inside an existing conventional magnet.  The vague descriptions on the Correlated Magnetics site seem to support that notion.  But I have no clue how they can do that on the scale they're working with...
Posted by Unknown at (permalink) 6:17 AM 2 comments:

Three, going on four...  Inches of snow on the ground right now, in Paradise.  And it's still snowing.  Really!

The weather forecast calls for a high of 45°F today, and rain through this evening.  You'd think that would take care of most of this white stuff, but it's not quite so easy.  The snow has been sliding off the roof of our house all night, and now we've got piles all around the house about 18" high.  That will take another week or so to go away, especially on the north side of the house.

This man is ready for spring!
Posted by Unknown at (permalink) 5:37 AM No comments:


One of the annoying things about believing in free will and individual responsibility is the difficulty of finding somebody to blame your problems on. And when you do find somebody, it's remarkable how often his picture turns up on your driver's license.

Tom's corollary: “I hate it when I’m an idiot!”
Posted by Unknown at (permalink) 5:34 AM No comments: