A cowboy named Bud was overseeing his herd in a remote mountainous pasture in California when suddenly a brand-new BMW advanced out of a dust cloud towards him.

The driver, a young man in a Brioni suit, Gucci shoes, RayBan sunglasses and YSL tie, leans out the window and asks the cowboy, 'If I tell you exactly how many cows and calves you have in your herd, Will you give me a calf?'

Bud looks a t the man, obviously a yuppie, then looks at his peacefully grazing herd and calmly answers, 'Sure, Why not?'

The yuppie parks his car, whips out his Dell notebook computer, connects it to his Cingular RAZR V3 cell phone, and surfs to a NASA page on the Internet, where he calls up a GPS satellite to get an exact fix on his location which he then feeds to another NASA satellite that scans the area in an ultra-high-resolution photo.

The young man then opens the digital photo in Adobe Photoshop and exports it to an image processing facility in Hamburg , Germany

Within seconds, he receives an email on his Palm Pilot that the image has been processed and the data stored. He then accesses an MS-SQL database through an ODBC connected Excel spreadsheet with email on his Blackberry and, after a few minutes, receives a response.

Finally, he prints out a full-color, 150-page report on his hi-tech, miniaturized HP LaserJet printer and finally turns to the cowboy and says, 'You have exactly 1,586 cows and calves.'

'That's right. Well, I guess you can take one of my calves,' says Bud.

Then the Bud says to the young man, 'Hey, if I can tell you exactly what your business is, will you give me back my calf?'

The young man thinks about it for a second and then says, 'Okay, why not?'

'You're a Congressman for the U.S. Government', says Bud.

'Wow! That's correct,' says the yuppie, 'but how did you guess that?'

'No guessing required.' answered the cowboy. 'You showed up here even though nobody called you; you want to get paid for an answer I already knew, to a question I never asked. You tried to show me how much smarter than me you are; and you don't know a thing about cows ... this is a herd of sheep.'

Now give me back my dog.

Now when you're done laughing, just think what this Congressman is about to do with the $12,000 they just stole from us (each and every taxpayer) in the “stimulus bill”.

I am. I'm feeling stimulated to vote for absolutely anyone who has never held elective office and who doesn't want it now. I'm full of hope that more than a few voters will feel the same way next election – at which point maybe we'll see some real change. 'Cause the only change I'm seeing right now is the boldness of the thieves in Washington, who seem to be convinced that they can steal the food right off our plates and we'll still vote for them. 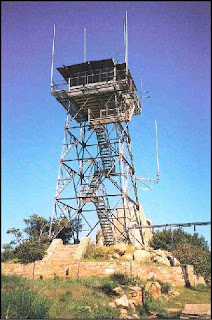 On Lyons Peak is a fire lookout tower, easily seen from Honey Springs Road. This tower is no longer used, though the Forest Fire Lookout Association would like to change that. From their page on the Lyons Peak lookout:

Lyons Peak has hosted a fire lookout tower since 1913. The original tower was a 5x5 foot telephone booth-like structure.

The tower is located on a Cleveland National Forest 'Island' that surrounds the peak.

Access to the peak is currently limited to helicopter or law enforcement escort only due to a road access dispute with a private land owner.

We wish them good luck with this, both because we'd love to be able to visit the lookout and because this would allow access for UCSD researchers to maintain the cameras on the peak that give us such valuable information during a fire.

The Forest Fire Lookout Association folks were recently able to make an inspection of the Lyons Peak lookout. There's an interesting report, with photos, at the link.
Posted by Unknown at (permalink) 3:05 AM 14 comments: 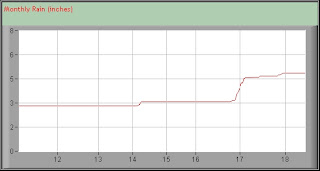 Well, I'm pretty sure the storm is now actually over. We got an additional 0.3 inches of rain yesterday that we didn't expect, as the storm left the area.

On my drive home yesterday afternoon, Lawson Valley Road showed all the signs of heavy rain earlier in the day: gravel washes across the road, rock and mud falls along road cuts, and muddy rivulets down the sides of the road wherever there is a slope. The streams are running strongly, and the waters are starting to turn clear. All around Lawson Valley, there are many rocks covered with sheets of water: small springs running out over exposed rock faces, which we see every time we get enough rain to percolate down through the soil and cracked rock of our mountains. And all the mosses and lichens are handsomely green.

The wet chaparral can be quite beautiful...
Posted by Unknown at (permalink) 2:35 AM No comments: