Our four dogs and I took our usual morning saunter today, at around 3:30 am.  The moon is slightly less than half lit, and there was a dim sort of light all about.  A few clouds were in the sky, reflecting the light, so instead of sharp borders between the deep shadow and the lit areas, we had softly changing light all around us.

As we wandered down the driveway and passed the end of our row of pine trees, all four dogs changed behavior at the same instant.  They switched from random, noses-down tracking and playing to full alert, all straining at the leash trying to head off up the gentle slope to my right (east).  There was no barking, but there was lots of low growling and aggressive interest.  I couldn't see anything in that direction, so I took out my little LED flashlight and pointed it up there.

Two glowing orange eyes stared back at me from about 30 feet away.  This is what had the dogs so excited!  As I held the light on the (at that point) unknown animal, it suddenly took off running to my left, down toward our gate.  As it did so, it came to within 15 or 20 feet of me, and my little flashlight lit it up brightly enough for me to see clearly what it was: a fox (most likely a Gray Fox).  Beautiful animal.  A second or so later, it had scampered out the gate and out of sight.

The dogs reverted to their previous behavior, as though nothing had happened...
Posted by Unknown at (permalink) 4:50 AM No comments: 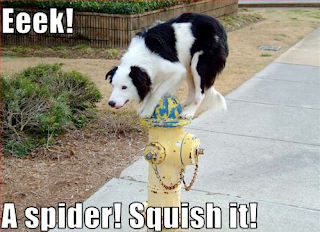 Via my lovely wife.

We have a dog who might well behave like this if he was able to.  Miki, our youngest male field spaniel, puts on a brave and aggressive front – but when something unexpected happens you can bet he'll be seeking that nice, safe spot right behind you...
Posted by Unknown at (permalink) 4:32 AM No comments:

Reader Doug S. pointed out this article, which talks about a back-to-school-stuff collection effort being coordinated by Mountain Health & Community Services and the Mountain Empire Community Center.  They're looking for anything the kids might need in their backpacks (including the backpack!) when they head back to school in September.  The effort is aimed at helping lower income folks out in the backcountry, the numbers of whom have gone up in the recession.