A Letter to the President... 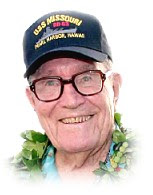 This letter was written in November 2009 by Harold Estes, aged 95, and a decorated veteran of WWII.  Snopes has verified its authenticity:

My name is Harold Estes, approaching 95 on December 13 of this year.  People meeting me for the first time don't believe my age because I remain wrinkle free and pretty much mentally alert.

I enlisted in the U.S. Navy in 1934 and served proudly before, during and after WW II retiring as a Master Chief Bos'n Mate.  Now I live in a "rest home" located on the western end of Pearl Harbor, allowing me to keep alive the memories of 23 years of service to my country.

One of the benefits of my age, perhaps the only one, is to speak my mind, blunt and direct even to the head man.

I am amazed, angry and determined not to see my country die before I do, but you seem hell bent not to grant me that wish.

I can't figure out what country you are the president of. You fly around the world telling our friends and enemies despicable lies like: "We're no longer a Christian nation" "America is arrogant" - (Your wife even announced to the world, "America is mean-spirited." Please tell her to try preaching that nonsense to 23 generations of our war dead buried all over the globe who died for no other reason than to free a
whole lot of strangers from tyranny and hopelessness.)

I'd say shame on the both of you, but I don't think you like America, nor do I see an ounce of gratefulness in anything you do, for the obvious gifts this country has given you. To be without shame or gratefulness is a dangerous thing for a man sitting in the White House.

Which ones did you mean? Was it the notion of personal liberty that 11,000 farmers and shopkeepers died for to win independence from the British? Or maybe the ideal that no man should be a slave to another man, that 500,000 men died for in the Civil War? I hope you didn't mean the ideal 470,000 fathers, brothers, husbands, and a lot of fellas I knew personally died for in WWII, because we felt real strongly about not letting any nation push us around, because we stand for freedom.

I don't think you mean the ideal that says equality is better than discrimination. You know the one that a whole lot of white people understood when they helped to get you elected.

Shape up and start acting like an American.  If you don't, I'll do what I can to see you get shipped out of that fancy rental on Pennsylvania Avenue.  You were elected to lead not to bow, apologize and kiss the hands of murderers and corrupt leaders who still treat their people like slaves.

And just who do you think you are telling the American people not to jump to conclusions and condemn that Muslim major who killed 13 of his fellow soldiers and wounded dozens more. You mean you don't want us to do what you did when that white cop used force to subdue that black college professor in Massachusetts, who was putting up a fight? You don't mind offending the police calling them stupid but you don't want us to offend Muslim fanatics by calling them what they are, terrorists.

One more thing. I realize you never served in the military and never had to defend your country with your life, but you're the Commander-in-Chief now, son.   Do your job.  When your battle-hardened field General asks you for 40,000 more troops to complete the mission, give them to him.  But if you're not in this fight to win, then get out.  The life of one American soldier is not worth the best political strategy you're thinking of.

You could be our greatest president because you face the greatest challenge ever presented to any president.  You're not going to restore American greatness by bringing back our bloated economy.  That's not our greatest threat.  Losing the heart and soul of who we are as Americans is our big fight now.  And I sure as hell don't want to think my president is the enemy in this final battle...

Mr. Estes, you just made my day.  Here's hoping that you win that final battle.  I'm doing what I can to help, and so are many other Americans...

Here's another letter to the President from last summer.
Posted by Unknown at (permalink) 8:13 AM No comments:

One Problem with the Voters...

I'm far from expert on economics, or on government spending, but even my basic level of understanding lets me observe that the vast majority of voters are woefully ill-equipped to understand how taxation and government spending are inter-related.  Sure, they understand the simple precept that nobody – not even the government – can forever spend more than they take in.  But when the discussion wanders around to cutting programs (especially entitlements) versus raising taxes, flights of sheer fantasy are more the norm than sober analysis.

I've long noted that a very high percentage of voters (including the majority of those who could be characterized as conservative, or fiscally-conservative liberals) instinctively believe that there's always another source of tax revenues to tap (generally it's some group of evil, money-grubbing people who are somehow escaping the tax man).  The most recent example of this was in the healthcare bill, which establishes new taxes and cost controls on the medical insurance industry.  These were clearly motivated by the desire to curb excesses there – but equally clearly (and unarguably) there have been no such excesses – the profit margin of medical insurance companies is quite low by comparison to other industries.

Where does this belief in magic come from?  Megan McCardle takes a look at a recent poll and attempts to find some answers...
Posted by Unknown at (permalink) 7:59 AM No comments:

Via the indispensable Megan McCardle:

The Ghost of Economies Yet to Come?

A detailed look at how the fraction of U.S. government spending that is entitlement (rather than discretionary) has grown – followed by a close look at some of the consequences of this.  These two make for depressing, but important reading.  Then add to this picture the inevitable demographic changes we're heading for (especially the growing fraction of our population over 65).

My conclusion: nothing but radical economic reform at the federal level can solve this problem.  The key two elements of such reform: (1) a simple, minimally-progressive income tax (tiny Estonia provides an excellent example), and (2) the outright elimination of most entitlement programs (yes, I really do mean to include Medicare and Social Security in that – what good are entitlements that can't possibly be funded?).

This amounts to my advocating for increased self-reliance – an almost-forgotten American tradition.  As one of the articles point out, this gets very hard to accomplish in a democracy if those on the government teat are in the majority.

That last observation has led to my continuing interest in this.  I'm not quite ready for it yet ... but I'm also not ready to rule it out.
Posted by Unknown at (permalink) 7:44 AM No comments:

Another climate scientist voices some skepticism, with the commonsensical observation that large temperature swings greatly predate the dawn of human civilization.  I guess SUVs didn't cause the medieval warming period after all...

Steve McIntyre follows the trail of evidentiary suppression (and some internal dissent on that) within the IPCC group with respect to the Holocene Optimum (aka Holocene Thermal Maximum).  This is another warm period very much like the medieval warm period (MWP) that's much discussed in climate science literature.  Most of the scientists involved in this internal discussion come off as petty and driven by their agenda; the few exceptions who seem to be driven by the truth stand out...
Posted by Unknown at (permalink) 7:29 AM No comments:

With his usual wit and insight, Mark Steyn takes a look at the structural disaster looming in the U.S. income tax system...
Posted by Unknown at (permalink) 7:11 AM No comments: