How Hitler Might Have Received the News that Scott Brown Won...

Posted by Unknown at (permalink) 7:41 AM No comments:

“Tax the rich!” is the frequent rallying cry of the liberal left.  Somehow, in a way I've never fathomed, it seems more fair to them to take a higher percentage of income as tax from people who earn more.  This is styled as a “progressive” tax, because the income tax rate gets progressively higher as your earnings go up.

The progressive income tax is certainly not unique to America, but we have put our own perverse twists on it.  The twists that have affected me personally include not only the progressively higher tax rates as my income has grown over the years, but (in recent years) the elimination of tax credits.  For example, our tax code has long had a tax credit for the interest paid on home mortgages.  In more recent years, that tax credit is removed for people whose income crosses a certain threshold.  Removing a tax credit is effectively the same thing as paying a higher tax rate.  An inverse example is the so-called “Earned Income Tax Credit”.  With this glorious example of progressive income redistribution, people who make below a certain threshold not only do not pay any income tax at all – we send them a check!   This used to be called welfare.

We have a lot of things like this in our tax code.  The net effect of them is to steepen the progressivity of our tax code.  When you earn more income, you pay a lot higher tax rate to the thieves federal government.

Here's an interesting real-world story that illustrates the ultimate effect of such progressivity...
Posted by Unknown at (permalink) 7:06 AM No comments: 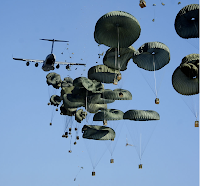 The U.S. Air Force is on the job.  This was taken yesterday in Haiti...
Posted by Unknown at (permalink) 6:47 AM No comments:

Most humans have an amazing ability to recognize faces – more specifically, the ability to see a face – even at a distance – and be able to identify the person who owns that face by name.

I have part of that ability – the faces that I know, I can recognize from a very low resolution image (as in from a distance, or from a photo where the face is just a bit bigger than a dot).  Compared with most people, though, I only recognize a few faces.  I've seen studies that documented the average person's repertoire of recognized faces at well over 1,000.

Read more »
Posted by Unknown at (permalink) 6:39 AM No comments:

It feels a bit like the coyote caught (and ate) the roadrunner, or the Poe visitor didn't return – something that just wasn't supposed to happen, something you thought couldn't possibly happen.  And yet it did.

Nowhere in these United States is there a more liberal state than Massachusetts – it's justifiably famous for its liberality.  This is the state that gave us not only Ted Kennedy, but Barney Frank, John Kerry, and a long list of other “progressive” celebrities.  This is a state where the Democrats have a 3:1 advantage over the Republicans, who have merely a token place in state politics.  It's basically a one-party state, with a political machine second to none in the country.  In that state, Scott Brown won!

Scott Brown gave an excellent victory speech last night.  This lad has a real future in national politics.  In fact, there are some interesting parallels between him and a certain former young Senator from Illinois.  But back to the speech...  Here are a couple of my favorite moments:


Let me tell you when I first got the feeling something big was happening in this campaign. It was when I was driving along and spotted a handmade, Scott Brown yard sign that I hadn’t actually put there myself.

This little campaign of ours was destined for greater things than any of us knew, and the message went far beyond the name on the sign.

It all started with me, my truck, and a few dedicated volunteers.  It ended with Air Force One making an emergency run to Logan. I didn't mind when President Obama came here and criticized me - that happens in campaigns. But when he criticized my truck, that's where I draw the line.


I go to Washington as the representative of no faction or interest, answering only to my conscience and to the people. I’ve got a lot to learn in the Senate, but I know who I am and I know who I serve.

I drive a truck, and I am nobody’s senator but yours.

That wrap-up sounds an awful lot like something a Tea Party candidate might say, should they win an election.  More of that, please, Scott – and with your actions, not just your rhetoric...

The distribution of votes within the state's districts is interesting.  Coakley won in the four largest urban centers (Boston, Springfield, Worchester, and New Bedford) and in a few other districts.  Scott Brown took everything else, and he took the rural areas with especially high margins.  If this were a state that had a history of close races (say, New Mexico, or Colorado), then you'd interpret this as a slight shift from former Democratic victories.  But in Massachusetts, where Democratic candidates for statewide office routinely win every district, this is a stunner – and it doesn't look anomalous, as it follows the usual pattern of Republican strength in the hinterlands and Democratic strength in the urban warrens...

The pundits are beside themselves with joy.  Scott Brown's victory gives them oodles of juicy new material to chow down on.

Me, I'm focused on a few near-term effects that are obvious:
A couple of months ago I was feeling very pessimistic about the course of the federal government over The One's first term.  I'm feeling ever so much better about this now...

Posted by Unknown at (permalink) 6:16 AM No comments: