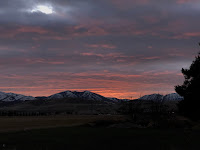 Sunset in Paradise...  From a few days ago, taken from our driveway.  While the east coast is having unusually cold weather – and even more unusual snow – we're having unusually warm weather here.  The snow is nearly all melted from the floor of Cache Valley, and mud is upon us.  The mountains are still snowy, but mostly above the 6,000' level.  Our 10 day forecast has only a couple of nights where our temperatures will be below freezing.  Last year at this time I was freezing my butt off in an arctic suit – this year I'm often outside in shirtsleeves.  So weird!
Posted by Unknown at (permalink) 7:40 AM No comments:

Kitchen modification, roughly number 357...  Since we purchased our home almost four years ago, we've been incrementally changing things in the kitchen to suit us.  The latest of these changes was to remove the modular cabinet-top Jenn-Air gadget that was installed in our island.  It was much like the one in the photo at right.  Both sides of that thing are removable (just by lifting them up), and a total of seven modules came with the house.  In the 3+ years that we've been living here, we've turned it on exactly twice – both times just to see if it actually worked.  With another four-burner range, two ovens, and a microwave, we just never even came close to needing it.  And it took up almost a third of our island counter-top!

So not long ago we had the brilliant idea of replacing it with a nice big cutting board.  With a piece of tempered glass to go over the cutting board when it wasn't in use, we'd be able to use the entire island as a counter-top – plus we'd free up quite a bit of space under the Jenn-Air that was consumed by the power source and a 6" diameter duct for the down-draft ventilation built into it.  The challenge was where on earth would we find such an odd-shaped cutting board?  I could make one, but I don't have a planer big enough to handle the 23" x 30.5" size we'd need.  So I did some research on the web, and discovered this site – and good reviews of it in several locations.  I queried them, and they had no problem at all making a nice maple cutting board to our specs.  The actual maker was John Boos, a company I'd read about when researching some other kitchen things, but had never done business with.  When I got the quote for the custom cutting board I was quite surprised at how reasonable it was: a solid maple board for less than it would cost me to buy the wood! 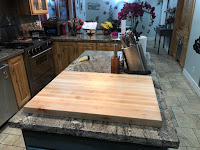 We received it a few days ago, and over the past couple days I removed the Jenn-Air and installed the cutting board (photo at right).  The tempered glass cover should be ready on Tuesday.  Removing the Jenn-Air was actually easier than I expected it to be, except for one little detail: making an odd-shaped “plug” for the hole in the bottom of the island's cabinet where the 6" duct entered from below.  Whoever made that hole apparently never heard of a compass. :)  It took me about eight tries to get a reasonably good fit, close enough that I could caulk the remaining crack.  That was a bit of a pain!  The board arrived packed in some of the best packaging I've ever seen – there wasn't a ding of any kind on it.  There was, however, a defect from our point of view: the edges had very sharp corners.  Probably the factory would have rounded them for me had I been smart enough to ask, but I wasn't.  So I used my router table with a 3/16" radius quarter-round bit, and put a nice radius on all those sharp edges, and sanded it all down nice and smooth.  That, however, caused a problem with the finish.  I bought the same finish the factory had used (they kindly documented it!), and by the time I was done you'd never know it wasn't done in the factory.  I mounted it in the Jenn-Air's hole by screwing eight rubber bumpers into the bottom of the board, two along each of the hole's edges.  I spaced these so that the board is snugged in tightly – yet it can be popped right out if need be.  We're very happy with the result!
Posted by Unknown at (permalink) 7:32 AM No comments: