Posted by Unknown at (permalink) 7:51 AM No comments:

Straight Out of Science Fiction... 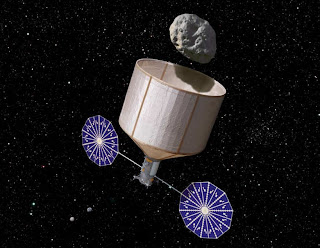 NASA is actually considering capturing an asteroid, hauling it back toward Earth, and parking it in lunar orbit.  Wow!  That's straight out of a pulp magazine's space opera of the '50s!

It gets a little less exciting as you examine the details...

First, we're talking about a really little asteroid - just twenty feet or so in diameter.  Secondly, NASA really doesn't have much interesting in mind for this thing.  They want to study it (which could be done anywhere, of course), and (wait for it!) they want to land astronauts on it.  Why?  Because that's one of their goals, given to them by Obama.  And it's too damned hard to go out and land astronauts on asteroids in their native milieu - so of course, we need to bring the asteroids to us.  So we can land on it, plant a little flag, do a little brag, and then knock a few rocks off with a rock hammer.

Naturally, we won't do it.  The political optics for the robotic missions suck, unfortunately.  It's apparently only a few curmudgeons like me who support them.  Everyone else wants the drama and romance of the manned missions, even if there's nothing particularly useful about them...
Posted by Unknown at (permalink) 7:07 AM 1 comment:

Here's one case where an armed citizen stopped a robbery, with the incident captured on video:

My progressive friends love to find ways of dismissing the abundant examples of such things.  They're pretty tricky about it, too.  For example, one statistic trotted out again after the Sandy Hook shooting was the dearth of examples of mass murders in the U.S. that were stopped by armed citizens.  A mass murder is defined (by the FBI) as a murder with four or more victims.  So the statistic cited is that very few (3, to be precise, since 1970) cases are on record where an armed citizen stopped a murderous shooter after the murderer had already killed 4 or more people.  However...there are dozens of cases (150 to 200, depending on the source, since 1970) where armed citizens stopped murderous shooters after they shot at least one person, but before they killed 4 or more people.

Well, all righty then, progressives.  You go right ahead and cite your statistic, and go right ahead disarming yourselves.  I'll think of it another way.  Would I rather be (a) in an unarmed crowd, or (b) an armed crowd, when some nutcase opens fire toward me?  That's a pretty easy question for me to answer!

Debbie and I are going to go live in a state with “must issue” concealed carry laws...
Posted by Unknown at (permalink) 6:06 AM No comments:

I'd have killed for something this like 15 years or so ago, when I was first learning how to construct regular expressions.  They were so darned hard to read!  What the heck would

mean to any normal person?  Now, after years and years of practice, the symbolic equivalent of this is kind of “built in” to my brain, just as with Java or JavaScript constructs...
Posted by Unknown at (permalink) 5:45 AM 1 comment:

But I suspect Debbie would kill me if I did...

Posted by Unknown at (permalink) 5:39 AM No comments: