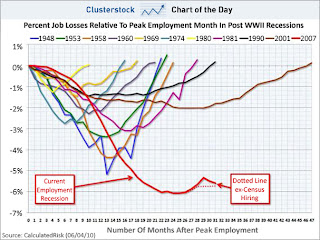 I've posted this chart several times before.  Now that the census jobs have all basically disappeared, you can see that (measured by job loss) this recession is muddling along at the bottom with no obvious recovery in progress.

Trillions of dollars stolen from the tax payers of future generations (to pay back the loans), and absolutely nothing to show for it.  That's your government at work, folks.  Somebody is getting rich on our backs, and it ain't me.

Are you pissed off yet?  Remember this in November.  I'm gonna vote for anyone who supports radical reforms, especially radical reductions in government spending...
Posted by Unknown at (permalink) 7:22 AM No comments:

For the last couple of nights, I've been a bachelor again – Debbie is 70 miles away, taking care of a friend who's recovering from knee surgery (and doing fine).  So it's been just me, our four dogs, and seven cats...

Last night, one of our dogs (Mo'i) slept in the living room so he'd be close to the door that Debbie would return through.  Another (Lea) is getting old, so she slept in her own little bed at the foot of ours.  The other two (Miki and Race) hopped up on the bed with me, and we all snored together.

The alarm clock was off for this morning – after a long, tiring week I was looking forward to sleeping at least a little later than usual.  My first memory of this morning is of my hand somehow being immersed in water, and someone was washing it with a washcloth.  I opened my eyes.  Race was watching me with a mischievous twinkle in his eye as he slowly licked my hand.  As soon as he figured out I was awake, he instantly went into “play mode” – gently nipping my nose or my hand, and waiting eagerly for my retaliation.  We horsed around for a few minutes, he and I, joined shortly by Miki.  The two dogs were playing with each other just as much as they were playing with me.  To share their morning joy – the simplest joy, of just being alive – felt like a privilege and an honor, and certainly a great pleasure.

Then I got out of bed.  If you've ever had a dog, you know what that means: that's the signal to your dogs that it's time for the morning walk.  With four dogs, that means pandemonium erupts.  Barking, tails wagging, running back and forth between me and the door until I'm directly in front of it, jostling for position as I attach the leashes, the tension building until the great moment arrives: I open the door!  Four dogs rush simultaneously through the opening as soon as it's 6 inches wide – and somehow they all make it.  Lea is playfully nipping at Mo'i, who is grumbling at Miki, who is straining to be the first out into the yard, in the process running right over the top of Race.  Barking, straining at the leashes in four different directions, tangling them and tying them into knots, running around madly until they find the spot.

Then...ah, the joy of the morning piss.  The looks on their faces as they relieve themselves says it all: this is as good as life gets.  Lea and Mo'i are very businesslike, serious, and fast – in just a few seconds they're done and ready to go.  Miki takes his time, enjoying every moment of the experience.  Race would like to be done quickly, so he could go about his greatest joy (searching for pine cones), but his bladder is large compared to the size of his squirter, so he's the slowest of all – the torment of waiting mixed with pissing pleasure.

Finally they're all done, and we're off for our walk.  This morning there were no interesting smells, so all the dogs did random things all the way down and back our driveway.  The sun was just rising through a notch in the hills to our northeast; no stars (not even bright Jupiter) were visible.  Haze near the ground made everything fuzzy, like one of those romantic countryside photos.  On the way back, I looked at the work that's been done on our roof.  The soffits are now installed nearly all the way around the house, except for a final trim strip.  It's really quite amazing how different the house looks with this new red roof – it's even a little disconcerting, as this place I've called home for over ten years now has disappeared, replaced but a new, alien home.  But I'm sure I'll get used to it, too.

Back at the front door, now the dogs are all jostling to get back in the house.  Leashes off, and four dogs are waiting, facing the door...waiting for the big moment when the door opens.  Again, once it gets to about 6 inches wide they all somehow get through the opening.  Lea heads immediately for a dog bed, to lie down and rest.  Mo'i and Miki head for the watering dish – a dog needs a drink after such exciting morning activity!  And Race...well, he's racing around the house, looking for an appropriate toy to bring back to me so that I'll throw it for him to chase.  He'd do that all day long if I'd oblige...
Posted by Unknown at (permalink) 7:14 AM No comments: