More memories...  Here are a few more of the photos I found in my mom's collection. 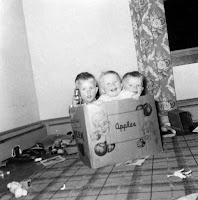 First up: three kids in a box.  The photo is dated (by the lab) March 1955.  I'm pretty sure that's the northeast corner of the dining room of our home, but I don't recognize the rug in the photo.  I don't remember the drapery, either.  I'm pretty sure that's me on the left, and my brother Scott on the right.  That implies the center kid is my sister Holly, but I don't think she was even born then :)  So until someone straightens me out, that's a mystery kid. 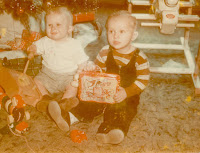 This photo is easy: it's marked on the back, “Scott & Tommy” in my mom's handwriting.  Scott's on the left, I'm on the right.  It's obviously Christmas, I'm guessing 1954 by our ages.  The color is awful in this photo, but if you squint (and perhaps drink a little Scotch), you can make out a wooden dachshund pull toy (I remember that!), a lunch box, a broken cab from a toy truck, a wagon, a doll, a box of tea bags (?!?), and a hobby horse.  I don't recognize that rug at all, and I can't tell what room this is in (or even if that's really our house!).

The photo at right was a fun one to find.  On the back, in my mom's handwriting: “love it love it love it!”, and it's dated by the lab in November 30, 1953.  Presumably it's from the preceding summer, and developed later.  That's my dad sitting down, and it must be me he's holding onto (as I was the only kid born at that point!).  I look pretty happy in that scene.  Even in the black-and-white photo my dad's “farmer’s tan” is clearly visible :)  He doesn't look like a muscle-man in that photo, but I know he was very strong and had amazing endurance.  Despite working physically hard every day, he never built up a lot of obvious muscle.  I don't know enough about how that works to speculate on why, but it's something I've noted before.

This one is me again.  On the back it says “Tommy age 1” in my mom's handwriting.  The lab dated it April 1954, when indeed I was one year old.  I don't remember that couch, or the rug, but the floor looks like our home.  There are a couple of mysterious objects on the floor that I don't recognize – they look like some of the weird Cambrian life forms fossilized in British Columbia's shale deposits :)   The nipple on that baby bottle looks gigantic compared with my fingers.  With the assistance of that couch, I'm standing – a little precariously, I suspect. 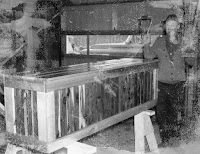 This photo was quite damaged; the image at right is the best I could do in PhotoShop.  On the back, in my mom's handwriting, it says “Dad making cedar chest that is in the cellar”.  The original is a black-and-white Polaroid, so there's no lab date.  My grandfather (Donald MacLaughlin) is sort of visible; in his right hand is an old-fashioned pruning saw.  That hat was almost always on his head!  I can't see clearly enough to be certain, but that looks like the inside of the garage in their Long Branch home, which they moved out of around 1955 or 1956.  Mom's note implies that it was in the basement of our home, but I don't remember it.  It's now in my shed.  I'm going to do a little restoration and refinishing on it, and then it's going in my office. 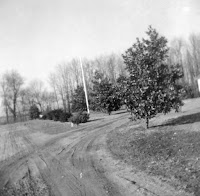 This last photo really brought back some memories for me!  It's dated by the lab as March 1959, and my mom wrote “The magnolias when there were 5”.  She's talking about the larger leafed trees visible in the photo; they were beautiful Magnolia grandiflora specimens, and I remember them (and their gorgeous perfumed flowers) very well.  But what really jumped at at me was the white flagpole visible near the center of the photo.  The erection of that flagpole is one of my earliest memories.  My parents were pretty sure that was installed in early 1954, when I was about 16 months old.  I remember looking through a window and watching a funny truck back up to the big hole that had been dug.  Then about 5 men worked with ropes and another pole to raise it up.  For whatever reason I was fascinated by the process, and I can still remember the steps involved.  My memory of the process ends when the me were all shoveling dirt into the hole to hold the flagpole to a vertical.
Posted by Unknown at (permalink) 5:08 PM No comments:

Construction update...  The sun room installers are going great guns!  It's looking like they'll be finished on Monday.  As I write this post they are installing the last pieces of glass in the roof.  After that, they put fancy aluminum-and-rubber gasket strips in place to seal the places where glass panels have a butt joint, do a few cosmetic things, and then they're done!  The photos: 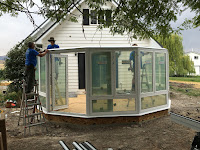 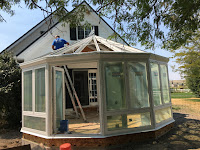 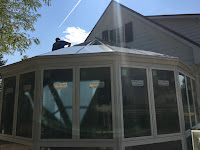 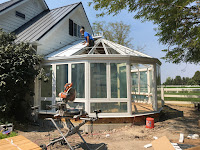 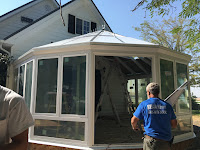 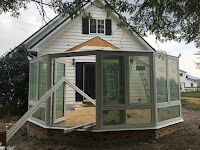 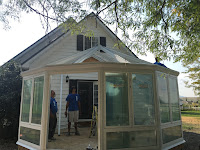 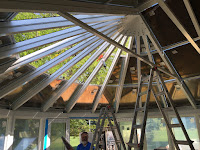 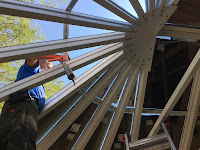 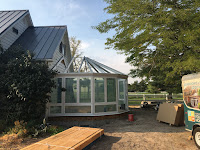 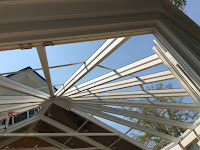 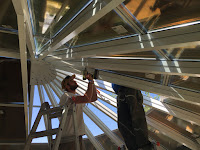 Debbie update...  Lots of news on the Debbie recovery front this week – and it's all good!

On Wednesday she had her 12 week followup appointment with her surgeon.  What we were hoping would happen is that she'd get clearance from him to start putting weight on her left knee (the badly injured one).  We got that clearance, and more: he told her to stop using the wheelchair, to start aggressive physical therapy (the main concern there is to get her left knee's flexion back to normal), to stop using her leg braces, and to stop the hydrotherapy (as it's not aggressive enough!).  Her surgeon was surprised (in a positive way) to see how well her repaired tibia plateau had built new bone, especially considering her osteoporosis.  The only concern he raised was her current flexion limitation – but he carefully noted that the worst case is that it's fixable with another surgery.  He referred her to a specific physical therapist who has special equipment that will help her.  For example, he has a treadmill with a harness that will let her put partial weight on her left leg, gradually increasing it as she improves.  Her first appointment for that is next Tuesday.

This morning she had her first followup with her endocrinologist.  We'd only gotten a little feedback on her lab work before this morning.  Today we found out several interesting things, all of which are amenable to treatment:
Debbie also had a chance to discuss her diet (low sodium, high calcium) with her endocrinologist, and the upshot of that is a bunch of ways to make her diet less dreary.  For instance, she can eat as much meat as she wants (so long as it doesn't have added salt), and can on occasion drink one of the Epic beers she so loves.

Posted by Unknown at (permalink) 3:42 PM No comments: