Devil-spawn in Paradise...  After having a nice cup of tea late this morning, I took my cup down to the kitchen sink and washed it out with hot water.  Well, I tried to – but there was no hot water!  After asking Debbie if she'd noticed the hot water wasn't working (no, she hadn't), I headed down to the basement to see what disaster had befallen our hot water heater.  At this point it's the only thing left in our “mechanical room” that hasn't been replaced, so my assumption was it had died.

On my way down the stairs, Debbie hollered down to ask if perchance the water was running in the cattery sink.  Why, yes it was.  It then turned out that Konani (our newest addition) had previously been suspected of turning on the faucets so he could play in the water.  Apparently he turned on the hot water this time – and drained the entire tank of hot water!

I thought of a way to kitten-proof the faucets, by strapping a bungee cord around the handles (first photo below).  I pulled out our container of bungees and went to work.  Meanwhile, Devil-spawn (aka Konani, second photo below) decided to spill the bungees onto the floor, and as fast as he could distribute them to the far corners of his universe.  This caused me to remember all sorts of words and terms that I have exercised only infrequently since leaving the U.S. Navy, lo these many moons ago.  I spent 10 seconds kitten-proofing the faucet, and 10 minutes gathering bungees, some of which were in the next zip code.  The whole time I was doing this, Devil-spawn was riding on my slipper, chewing and clawing as fast as he could.  I think he was trying to fell me.  My words, which would have scorched any mortal being, had no discernible effect on him. 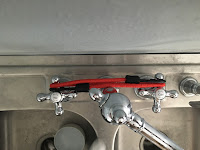 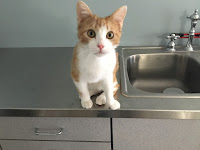 Paradise ponders...  We woke up to a couple more inches of snow this morning.  In the photos below, note particularly the size of the pile of snow that fell off the barn's roof (the pile off the house is even bigger!): 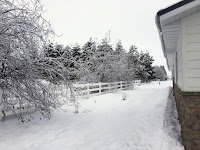 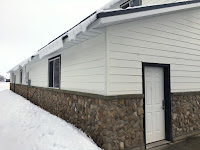 I took those just before I went into the barn to start painting the trailer sides.  Here's what it looked like before and after I got the first coat of primer on: 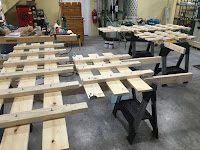 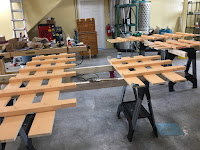 That's 90 minutes worth of painting there, because I used a brush.  It's going to take a total of 6 steps to paint these, because I have to paint each side with one coat of primer and two top coats.  It works best, I've learned, if I flip the pieces in between each coat – but that means I have to wait longer between coats, so that the coat I just did is hard enough to stand up to resting on the rails.  I'm going to try priming the second side later this afternoon; we'll see if that was a bright move a bit later :)
Posted by Unknown at (permalink) 10:49 AM No comments:

The latest North Korean propaganda film...  The North Korean regime regularly releases this sort of thing.  It's hard for me to believe that these films actually generate any positive effect for the regime.  On the other hand, they keep making them ... so maybe they do.  In any case, I think it's useful for outsiders to view these once in a while, to get an understanding for just how loony that regime is.  It's amazing, and appalling, that a regime like this still exists on the planet.  The demise of the Soviet Union didn't end it all..
Posted by Unknown at (permalink) 10:25 AM No comments: