A Lovely Day in the Chaparral...

Debbie and I took a long, leisurely drive through our local mountains yesterday, stopping a few favorite places and exploring a few new ones as well.  Race and Miki came along for the ride.  Then late at night I watched the coverage of Curiosity landing on Mars – successfully!  A lovely day, indeed...

We left home around lunchtime, so our first stop was our favorite fast-food joint in all of San Diego County: Frosty Burger in Pine Valley (the linked Yelp reviews are, as usual, wildly variable).  We shared fish sandwiches, a “mountain cheeseburger”, fries, and iced tea.  But we didn't eat in Pine Valley; instead, we started down one of our favorite back-country drives: Pine Creek Road, which starts just northwest of Pine Valley and heads toward the summit of Mt. Laguna.  We found a nice parking place and wolfed our delicious lunch.

After that, our intent was to take an unnamed forest road to the northwest that heads toward the high meadows in the eastern part of Cuyamaca Rancho State Park.  We'd been on that road 10 or 12 years ago, and we were curious to see what state it was in 5 years after the big fires.  But this was not to be, as a huge locked steel gate blocking our way.  Dang.

So we continued up Pine Creek Road to Deer Park Road, a four-wheel road that heads almost directly north through some nice riparian areas.  This time of year, of course, all the grasses have long since turned golden brown.  The area burned in spots, but mostly it's undamaged from the 2007 fires.  A mile or so down Deer Park Road there's the site of an old mine, and the photo at right shows some of the remaining machinery.  I think this was the center of a machine that one would harness horses to, and they'd walk in a circle to pump water.

Further up Deer Park Road we started running into big stands of “mountain mahogany” (Cercocarpus montanus) with their beautiful hairy seeds.  These were some of the largest and most beautiful stands I've ever seen.  A typical setting is at left.  From my reading, these plants are amongst the favorite browse of goats, sheep, deer, and cattle.  I didn't see any sign of browsing on any of the thousands of plants I saw, which probably tells us something about the recovery of the large ungulates.

Seen close up, the mountain mahogany seeds are especially beautiful, especially when backlit.  I've tried to capture this (at right), but not really with much success.  One interesting thing about these seeds: the hairs are slightly sticky, so they catch and hold dust.  Shrubs near the road appear to have reddish seeds – but they're really just as white as these, they've just caught a lot of road dust.

We continued up Deer Park Road to its intersection with Indian Potrero Road, which we took to the east, back toward Sunrise Highway.  At the time, actually we had no idea where we were.  This was new territory for both of us, and we thought we new this backcountry so well that a map would be silly.  I figured out afterwards where we actually went :-)  On Indian Potrero Road we came over a ridge to see a beautiful view to the north (at left).  That's a classic view of summertime San Diego mountain mixed chaparral and riparian areas, in this case 5 years after a major burnoff.  If we had taken this photo in, say, November of 2007 ... you'd be looking at a moonscape, a scene with nothing but black and shades of gray.  Some of the areas (center photo here) were amongst the hottest-burning areas of the fire.  When we drove through here right after the fire, I stopped in a few places and dug to see how far down the charring went.  It went over a foot down, which made us wonder if any roots or seeds had survived.  Well, now we know the answer: plenty of them survived.  Unless you're observant and spot the skeletons of trees left after the fire, you'd never know this had recently burned...

We also drove through vast stands of one to two foot high manzanitas, a ground cover species.  Most of the manzanitas in San Diego County are one of four shrub species, growing up to 30' or more high (I have a 35' specimen in my back yard).  But we do have a few large stands of this groundcover species, mostly on the western flanks of Mt. Laguna, which is where we were driving.  We see these much more commonly in the higher reaches of more northerly mountains.  My father and I saw enormous stands up in Mt. Lassen National Park a few years ago.  At right you see our old LandCruiser.  She's so ancient and decrepit that we're afraid to take her too many miles from home, but despite that she still serves us faithfully – with nearly 300,000 miles on the odometer.  Helluva vehicle, those old LandCruisers.  The new ones just ain't the same...

After we connected back up with Sunrise Highway, we took off to Julian for a little refreshment (iced coffee and iced tea).  Then Debbie had a brilliant idea: Dudley's!  We were only a few miles from our favorite bakery, and hadn't been in a long while.  We headed down with plans to stock up on potato bread, but this was not to be.  The bakery looked like a hoard of locusts had descended upon it.  The shelves were nearly empty.  We walked out with just three loaves of bread to freeze – but a half-dozen bags of their luscious fruit bars, so all was not lost.

At this point our plan was to just drive around for a while, exploring new places, until it was near sunset.  Then we'd go for some wildlife viewing at Stonewall Mine Road.  But even after tooling around the Pine Hills area for a while (lots of beautiful homes up there), we ended up with too much time on our hands.  Then a pair of good ideas: (1) trek on back to Frosty Burger for a hard-pack ice cream cone, and (2) head down to Japatul Lane where just the night before we'd had great viewing of deer.  This plan we executed perfectly.  Armed with two strawberry ice cream cones, we headed down to Japatul Lane.  We pulled in there about 15 minutes before sunset, and the dogs finished off the last of Debbie's ice cream cone just as we parked.

Within a few minutes of us parking, deer started to trickle into the meadow.  But they never stopped trickling, right up to darkness.  Debbie and I were entranced for the next hour.  We had at least 45 head of deer at the end, amongst them three magnificent stags and 15 to 18 fawns.  Some of the fawns appeared to be just days old, with the short little “baby faces”, still wobbly, and in the case of two fawns they appeared to be incompletely cleaned up after birth.  It was just spectacularly good viewing – and for once we actually remembered to bring the binoculars.  I can't imagine a better way to end a nice day in the countryside than to be able to watch fawns cavorting for an hour, just 100' or so from us...

And then after we got home, I stayed up to watch Curiosity's spectacularly successful entry and landing on Mars.  From everything I've read so far, it was an absolutely flawlessly executed sequence, a real technological tour de force.

All together a day to remember!
Posted by Unknown at (permalink) 8:31 AM 1 comment:

Curiosity is Down and Safe! 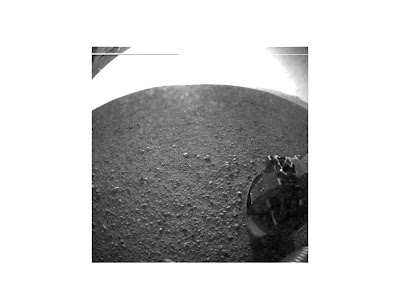 If you're interested in robotic space exploration, you probably already know: the Curiosity rover is on the surface of Mars, where it's supposed to be, safe and sound.  The science mission is about to begin!

The photo at right is the first medium resolution (512 x 512) image returned.  It's from one of the hazard avoidance cameras after its dust cover had been sprung open.  Curiosity is festooned with cameras, taking advantage of modern electronic imaging technology.

I'm not sure about the science mission timeline.  Ordinarily when a lander first touches down, there are hours to days of preparation before the lander's science mission is fully ready to go.  Much of this is because the lander is generally all “folded up” for the cruise and descent stages of the mission, and the controllers have to “unpack” it all.  I'm not sure how much of that is true for Curiosity – not only did it have a radically different descent phase, it's also got a much smarter on-board control system.  Things could be different this time around.

I stayed up late last night to watch the streaming feed from the JPL flight control center.  It was pure pandemonium there after confirmation of safe touchdown – and who can blame them?  I felt like committing a little pandemonium myself :-)
Posted by Unknown at (permalink) 6:58 AM 1 comment: