Gold King mine blowout...  The EPA finally released video footage of the blowout, which (as they've admitted) was entirely caused by their own incompetence.  The mine's owner tried to get the EPA to use a safer method, but failed – apparently because of the arrogance of the EPA administrators, who are environmentalist wackos, one and all.  They seem to believe that all mine owners are evil by definition, and don't listen to them – despite their typically vastly higher understanding of mining.  The same general thing happens in the oil industry as well.

This incident hits home for us, as this is an area we know well.  Watching the video, I recognize the impacted area; we've visited it often.  It's infuriating to think that the government is responsible for this – and I can't help but fear the results of the inevitably inept and corrupt health care bureaucrats after a few years of ObamaCare...
Posted by Unknown at (permalink) 8:39 AM No comments:

Morning in Paradise...  We slept in a bit this morning, as we had nothing scheduled for early in the day.  We had our tea and coffee in the morning twilight; by the time we finished it was civil dawn.  The Wasatch mountains to our east cause our dawns to be highly variable by season – as the point where the sun rises over the mountains moves north and south during the year, the height of the mountains change.  Right now, from our home, the southward movement of the rising point means that the sun is now starting to rise through a notch – and the sunlight hits us a little earlier each day, instead of later as you might expect when winter approaches.

As Miki, Race, and I walked this morning, we got to see this phenomenon first hand.  We started walking uphill, due east.  To our right (south) we could see sunlit fields in the distance (and some of the photos below show this).  These are fields that already see the sun through the bottom of that notch.  As the sun rose, the edge of the notch's shadow moved swiftly toward us.  In the space of five minutes of walking, the shadow moved about a mile toward us – until we were suddenly brightly lit by direct sunlight.  At that point we had some very long shadows, as you can see in one of the photos below.

On the eastern slopes of the Wellsville mountains, to our west, we could see big swaths of fall color, especially the reds of the oaks.  It seems a bit early for that, but the locals tell me that the onset of fall color varies as much as six weeks.

We saw lots of birds this morning.  The hawks are still hanging around the barley fields, waiting for the low-IQ voles to poke their heads up and volunteer to be hawk breakfast.  At the most distant point of our walk, we flushed a group of grouse.  I didn't recognize the species.  There were perhaps 10 adult birds and 7 or 8 juveniles.  As we walked downhill past a row of weeds at the edge of an alfalfa field, I spotted a bright red bird, roughly sparrow-sized, 100' or so in front of me.  I couldn't see any details about it, and it was only visible to me for about 5 seconds, so I have no idea what it was.  I don't know any red birds here, so it has to be something new to me.

Some photos from today's walk: 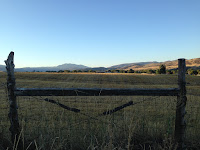 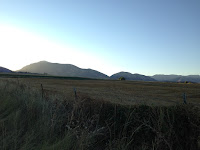 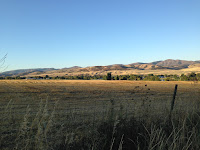 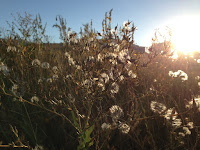 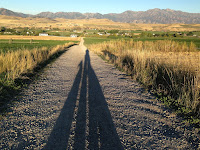 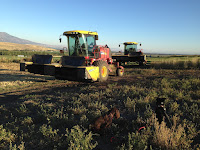 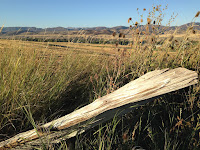 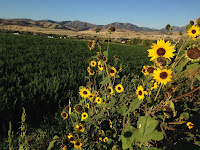 Posted by Unknown at (permalink) 8:02 AM No comments: