Kings of the mountain... 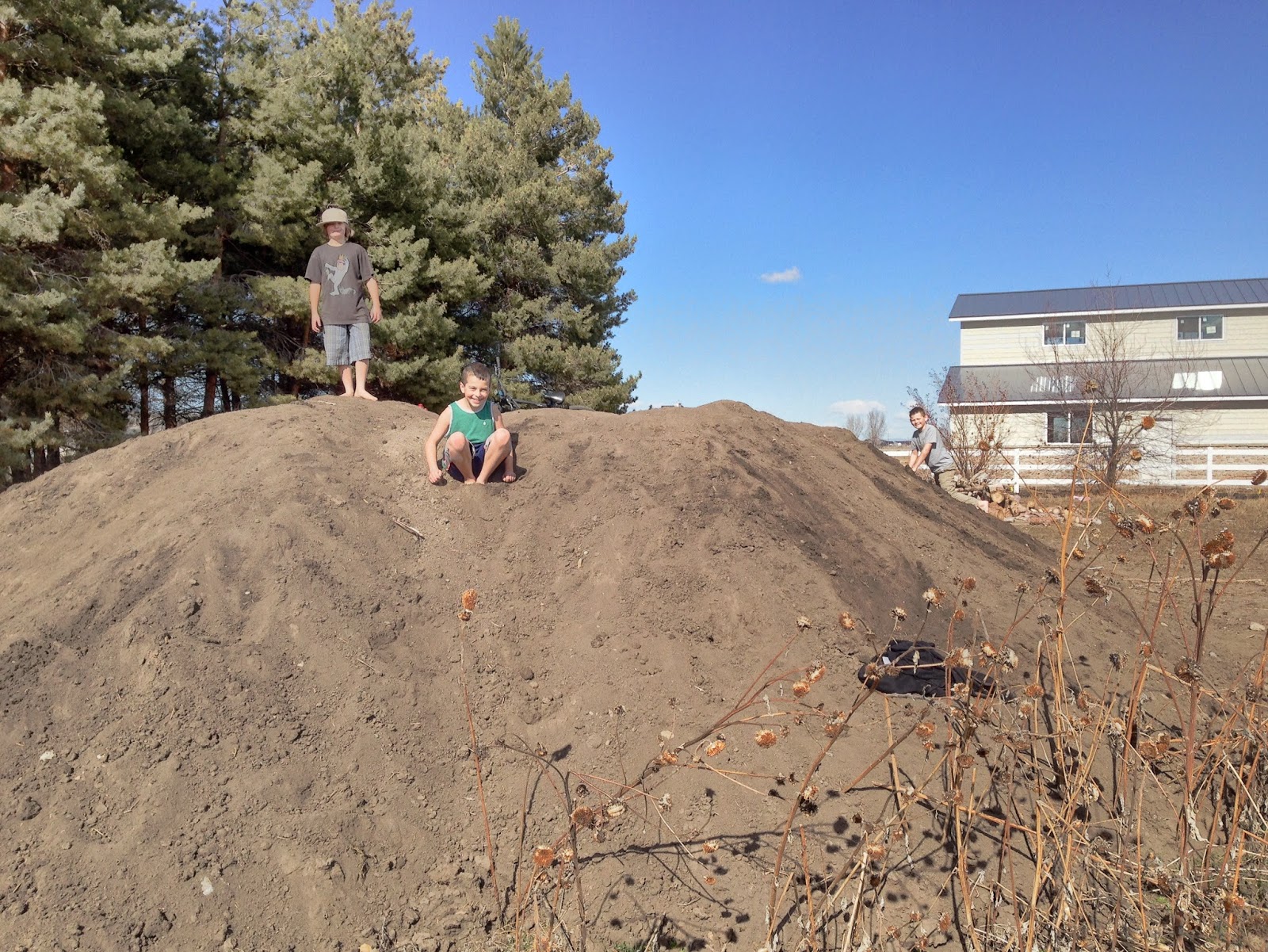 Kings of the mountain...  Last fall, our friend and neighbor Tim D. piled all the soil excavated for our barn's foundation up on the west side of our garden area.  Another neighbor's boys (and their friends) are enjoying the small hills Tim created.  They use them for building forts, riding their bikes on, and just generally running around.  In bare feet.  In February.  It's a gorgeous day out, 48°F and wall-to-wall sunshine.

Before the boys started playing on our “mountains”, they knocked on our door to ask if it was ok for them to do so.  They did the same thing before playing in our pine “forest” (visible behind the mountains), and before riding their bikes on our pavement.  They're endearingly polite, these boys – something 30+ years of exposure to California boys had me thinking that good manners had gone the same way as floppy disks, typewriters, and vinyl records...
Posted by Unknown at (permalink) 11:40 AM 1 comment: 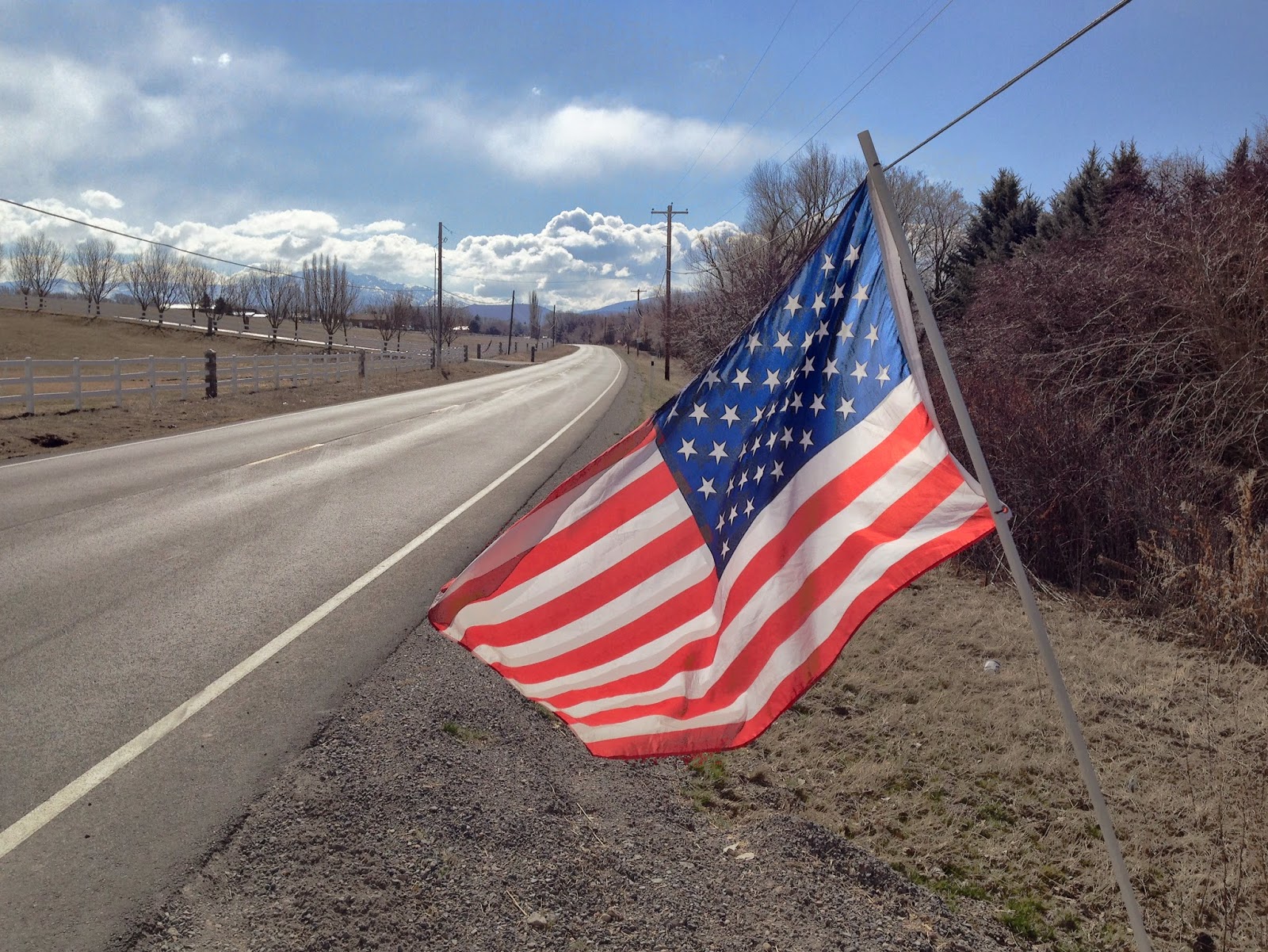 Flags on President's day...  The local Boy Scout troop provides a service to local homeowners on patriotic holidays: they post flags along the road.  The photo at right shows our flag this morning, and if you embiggen it you'll see several of our neighbors' flags to the south.  The Boy Scouts do this for 7 or 8 holidays during the year, for a donation of $35.  I've noted that several families in town who likely can ill afford such an expense also have the flags up – either the Boy Scouts are helping out, or they're sacrificing something meaningful to pay for them.  Either way, another interesting statement about the local culture...
Posted by Unknown at (permalink) 11:32 AM No comments:

Paperless, updated...  About six weeks ago, I posted about our adventure in switching to paperless records storage.  We've just gone over 100 documents filed this way, with about 250 pages total.  As I gain familiarity with the system, it just gets easier and easier to use.  I've started using folders in DevonThink to organize the information, but only in a very high-level way (for instance, all of our financial records are in a single folder).  I've started to routine scan manuals and instruction sheets (it's so easy!), not because they take up so much room, but because by being scanned they're so easy to search.  Very, very convenient.

So just in case you were wondering whether we still thought going paperless (as Helen W. asked by email yesterday) was a win ... the answer is “Hell, yes!”
Posted by Unknown at (permalink) 4:37 AM 2 comments:

A switching mystery, resolved...  Yesterday I replaced a few more electrical switches.  I've been chipping away at this project, working my way through the house replacing all the switches and outlets, and cleaning up the (all too numerous) wiring problems I've found in the process.

One of the switches I replaced is located near our front door.  It controls four outdoor floodlights, which we use every evening and morning to light up the yard when we walk the dogs.  We only know of that one switch for controlling those lights, so I was surprised to discover – when I removed the existing switch – that it was wired as a “three-way” switch.  The fact that it was wired as a three-way switch implies (rather strongly) that there is another switch somewhere that also controls these same lights.  That was a big surprise to us – we have no idea where that switch might be, and we don't know of a logical place for it to be located.  In this house, though, it could be located in some completely nonsensical place.  We joked that maybe it was in the basement, where there are several switches whose purpose we haven't yet deciphered.

That's not the mystery that the title of this post refers to, though, as we haven't yet resolved it.  The resolved mystery was a different one: I replaced the switch and then tested it.  I test these rewiring jobs every time, even when (as in this case) the rewiring is trivial.  It's pretty difficult to miswire a three-way switch, and there is no way to dangerously miswire one.  I was confident this one was wired correctly, as the “hot” wire was easy to identify visually.

So I was very surprised when it didn't work.

I took the new switch out, and connected the wires directly.  I saw a spark, but no lights came on.  I checked the circuit breakers; no breakers were tripped.  WTF?  There's so little that can go wrong with a circuit like this!  With the power verified (the spark and no breakers tripped), what's left to go wrong?  All four bulbs coincidentally burn out?  Just in case that was somehow the problem, I replaced one.  No joy.  I went round-and-round on this for about an hour, and finally just gave up.  I decided to reinstall the switch, button things back up, and troubleshoot it later.  I had other things to do.

A couple hours later, while moving some boxes around, I was thinking about the switch problem.   It was bugging me, because it was such a simple electrical wiring problem and yet it had me buffaloed.  Then I remembered something I'd observed that surprised me: the spark made when I connected the wires manually was quite small – smaller than I'd expect for a circuit with 600 watts of lights being switched.  Why would that be?  Then a few seconds later, I had it – I knew why the lights weren't working.

Did you figure it out?

So at dusk I walked Mo'i, and turned on the light switch.  The lights all came on.  All that time I spent troubleshooting the switch earlier in the day was for naught – it was wired correctly in the first place, and was working all along.  The lights simply aren't allowed to come on during daylight hours!

I still have no idea where that photoelectric control is located.  Nor do I know where the other switch is.  Yesterday I also replaced another “mystery switch” located near our front door.  This one is a simple on/off switch (not a three-way), located in our entranceway.   The circuit is live, and it draws current when turned on (about an amp, so around 100 watts).  We haven't detected anything that it's turning on and off.  My working theory is that the former owner installed a light bulb inside a wall somewhere, and that's what's being controlled :)
Posted by Unknown at (permalink) 3:39 AM 1 comment:

The humor of Ronald Reagan...

The humor of Ronald Reagan...  Reader Simi L. sends along this delightful compilation.

Just seeing his face made me feel better about my country.  Odd, how effective that is.  I'm proud to call him an American, and proud to have him represent our country to the world.  It's been a while since I've felt that way, dammit...
Posted by Unknown at (permalink) 3:04 AM No comments:

Too cool for school?

Too cool for school?  That's what friend and former colleague Aleck L. says about this collection of math-explaining graphics, like the one at right...
Posted by Unknown at (permalink) 3:00 AM No comments:

Pleasant, configurable background noise in your browser...  It's free, and it's pretty darned good: Noisli.  It's been running on my system for about a week now.  If I'm writing code, or writing prose, it's a better background sound than even instrumental music.

Right now I'm listening to a mix of forest sounds, a gently burbling stream, and a distant thunderstorm.  Lovely.  One of the options for background noise is the sounds of a busy cafe.  I can't imagine anything worse for me.  I'd be willing to bet you that there is a strong correlation between extroversion and the selection of that sound as a background :)
Posted by Unknown at (permalink) 2:48 AM No comments: Oh, the 2016 presidential election is going to be so much fun!

Oh, the 2016 presidential election is going to be so much fun!  Maureen Dowd, a faithful progressive columnist, published a column yesterday that – how should I put this? – isn't very nice to the presumptive progressive Democratic candidate (Hilary Clinton).  The conclusion is quote-worthy:

But, for now, what Republicans say about government is true of the Clintons: They really do believe that your money belongs to them.

Someday, they should give their tin cup to the Smithsonian. It’s one of the wonders of the world.

That's gonna leave a mark...
Posted by Unknown at (permalink) 2:30 AM No comments:

Peripatetic mindscapes...  Long ago I observed that most of the engineers I worked with approached problems in a similar manner.  It's difficult to describe this similarity, especially in a non-technical way, but the general pattern is to approach an engineering problem with a large set of assumptions about how that problem might be attacked.  These assumptions might be about “best practices”, the “appropriate” tools, or many other things.  In all cases, though, the assumptions limit the creativity of the approach taken.

Another observation I made long ago is that there were exceptional engineers (I mean exceptional in both its senses: unusual and much better than average) who didn't seem to be encumbered by these assumptions.  I also noticed that many (though certainly not all) of these exceptional engineers were self-educated, as I am.  Could it be that the process of educating engineers somehow attaches this set of assumptions to them?  Well, today, of course, I'd say that was an obviously true conclusion, though when I was younger it wasn't nearly as obvious.

One characteristic of the workings of a mind unencumbered by a large set of engineering assumptions is a wide-ranging internal debate about what approach to take.  That internal debate is precisely what the aforementioned assumptions constrain – and it's why the absence of the assumptions results in a more productive creative process, as that enables the debate to include approaches that the assumptions would implicitly reject.

I just ran across an essay defining a term that describes this phenomenon: peripatetic mindscapes.  If you're interested in such things, it's a fascinating piece...
Posted by Unknown at (permalink) 2:21 AM No comments: