Fixed (at least with initial tests).  Apple has released an update that appears to fix the problem.  It was a firmware issue in the System Management Controller (SMC).

Late last year, I purchased a shiny new 15" Retina MacBook Pro for my own personal use.  I love this machine!  It's very small and light, but has plenty of RAM, storage, CPU power, and battery life.  It also connects (with just two cables, including power, thanks to Thunderbolt) to a suite of peripherals that would be part of a programmer's high-end desktop machine.  It's a thing of geekly beauty.

But it has a flaw.

The MacBook Pros are usually completely silent, but it has somewhat noisy fans that will kick on when things get too warm internally.  I've been using MacBook Pros for almost six years, and I'm very familiar with this phenomenon.  In all my prior experience, the fans kicking in – especially if they kick in at high speed – has always meant the same thing: the CPU is working really hard, so the CPU chip got hot.

Debbie (who works in the same small office that I do) have often noticed the fans kicking up at very surprising times.  Every single time that I've checked the CPU is almost unloaded, and the CPU temperature is near room temperature.  I had no idea why the fans were kicking on.

Yesterday, out of idle curiosity, I googled the issue and immediately found this very active thread.

I am not alone – lots of people are having this exact issue.  Furthermore, one enterprising fellow found a completely repeatable diagnostic: if you play a particular song on iTunes, at about 2 minutes into the song the fans will kick up high, then drop slightly, then kick up high again and stay there.

So of course I ran this diagnostic on my machine.  It matched the above observations precisely.  How weird!

But it gets even better.  With enough people reporting, a pattern becomes clear: only MacBook Pros made after late 2012 and equipped with a SanDisk SSD are having this problem.  Those with a Samsung SSD do not.

As usual with any open forum on the Internet, the posters are a mixture of certifiably insane, over-the-top inflammatory, sensible, despondent, smart, idiotic, and amusing.  Apple's response so far is distinctly unimpressive and very disappointing.

Here's hoping Apple gets their act together and fixes the problem, or otherwise makes it right...
Posted by Unknown at (permalink) 12:00 PM No comments:

Mr. FOIA (pseudonym of the person who released the original Climategate data dump) has dropped the other shoe – he (or she?) has released the password to the mysterious encrypted file included in the original Climategate dump.  There has been much speculation about what's in the file; now we're all going to know.  The password was released only to a group of people whom Mr. FOIA judged to be appropriate, for reasons only he (or she) knows.  Here are some posts from various and sundry folks on the topic.

The next few weeks ought to be interesting...
Posted by Unknown at (permalink) 9:29 AM No comments:

If you're a regular reader of this blog, you've heard me railing about the poor quality of our public education system.  If this topic is of interest to you, you need to read Sarah Hoyt's story.  Just go read it...
Posted by Unknown at (permalink) 8:12 AM No comments:

Rachel Takes Bloomberg to the Woodshed...


...The point is that you can’t demand we see you as a grown adult if you’re perfectly happy for low-IQ, power-hungry bureaucrats to tell you what to do, to help you protect you from yourself as though you are a 3-year-old who just shit himself and needs to run to the potty to change his Pull-Ups.

Some questions you might want to let roll around in your mind between trips to the bathroom:

If the government is right to limit the size of certain sugary soft drinks that you may purchase – for your own good – why is it not right to limit the total amount of food you may purchase? Please be specific in your answer. Eating too much leads to obesity and its harmful effects just as well as drinking 20 ounces of Pepsi. Surely, then, you support a prohibition against consuming more than survival-level calories per day...

You most definitely want to go read the whole thing...
Posted by Unknown at (permalink) 8:05 AM No comments:

Posted by Unknown at (permalink) 8:02 AM No comments: 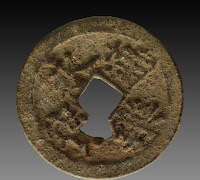 Scientists have uncovered a 600 year old Chinese coin on an island off the coast of Kenya, in eastern Africa.  Many folks have speculated that Chinese traders made it to east Africa before European explorers did.  This looks like pretty good evidence for that speculation...
Posted by Unknown at (permalink) 7:59 AM No comments: