For whatever reason, the notion of applying primitives like filters, min, sum, and so on to collections of objects has been something I've done a lot of.  In the past, I've often extended the generic collection types (ArrayList and HashMap, especially) to provide these primitives as I needed them.  The new Stream library allows me to do the same thing without having to extend the generic types at all, while still having superbly readable code.  I'm feeling much Stream love here :)
Posted by Unknown at (permalink) 8:37 AM No comments:

Suppose I told you...

Suppose I told you ... that if you wanted to farm potatoes, you'd have to either give half your potatoes to the government – for free – or else pay a prohibitively large cash fee.  If you didn't do one of these, the government would forbid you from raising potatoes.  Of course, being an American, you'd probably say “That’s total crap!  No way are we putting up with that!  I’d expect to hear something like that about Eastern Backwardistan, not in America!”

But you'd be wrong, because that's exactly what we're doing with raisins in America.  The law requiring this was part of FDR's “New Deal”.  The Supreme Court is reviewing the legality of it...
Posted by Unknown at (permalink) 7:49 AM No comments: 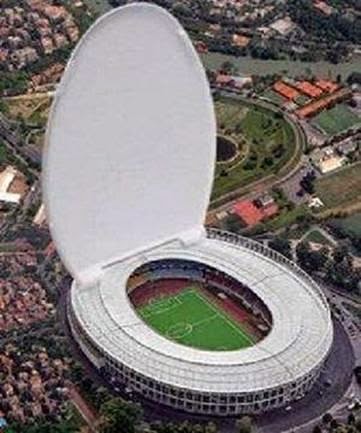 Preparations are underway ... for the 2016 Democratic convention (and Obama's universally anticipated farewell speech) in Charlotte, North Carolina.  They're remodeling their stadium with a new retractable roof.

Via my mom, who accuses me of stealing Reddy, her neighborhood red fox.  I think what actually happened is that Reddy heard about events in Charlotte, and took off to join the fun!
Posted by Unknown at (permalink) 7:39 AM 1 comment:

How the progressives think, part 238,342...  Most of us (especially homeowners!) have often had to make a choice between hiring someone to get a job done and doing it ourselves.  We just did that with our barn: we hired painters to paint the inside (and in the spring, they'll do the outside), rather than doing it ourselves.  Basically we traded off the cost of hiring someone (presumably skilled and equipped with all the right tools) versus the time and effort to do it ourselves.  Sometimes we decide one way, sometimes another.  Sometimes we decide we can do it better ourselves (as with me and the electrical work in the house), sometimes we'd rather pay to have someone else do it (as with the painters in the barn).  That's all commonplace for most adults.

Unless you're a progressive, though, you most likely didn't consider the taxes Uncle Sam won't collect when you do it yourself.  For instance, when I decided to do my own electrical work, the electricians didn't get to do it.  They didn't get paid for it, so they didn't pay taxes on the income I didn't provide.  If you're a real progressive, then you think I should pay those taxes when I do the work myself.

My first inclination was to laugh at this, assuming it was a joke.  Then I read up more on the topic, and discovered that they (the progressives) are serious.  This topic is being bandied about by progressives in power (in California and Massachusetts, in particular) as a possible legislative initiative for this year.

Man, we escaped from California in the nick of time!

Ace, writing on the same topic, includes this joke that I am shamelessly stealing:


A man owned a small farm in Vermont. The Vermont Labor Board claimed he was underpaying his help, so they sent an agent down to interview him.

"I need a list of your employees and how much you pay them," demanded the agent.

The cook has been here a bit more than a year and I pay her $150 every week plus free room and board.

Then there's the half-wit who works about 18 hours per day and does about 90% of the work.  He makes $10 per week, pays his own room and board, and I buy him a bottle of bourbon every Saturday night.  And, once in a while, he's pretty sociable with my wife."

"You're talking to him," replied the farmer.

It's things like this that make me doubt this country's chances for long-term survival...
Posted by Unknown at (permalink) 7:30 AM No comments:

I've been sort of bemusedly watching my Twitter feed and the hashtags that appear on it.  I've been vaguely bothered by the whole hashtag phenomenon.  On the one hand, it seems like a great technical solution to the problem of how to find out what people are saying on a particular subject.  On the other hand, often (but certainly not always) people are using hashtags more as a trivially easy way to show their agreement with some expressed concern, like Michelle Obama and her #bringbackourgirls sign.  In a way, they're like the MIA/POW wristbands so popular in the '70s, or the peace sign pendants in the '60s.  While at first they may have been a meaningful symbol of where someone stood, they quickly became meaningless and insignificant tokens used by someone who really doesn't care (or even understand) the issue at hand, but wants to pretend that they do.

Why would someone do this?  Social acceptance is the obvious answer, and I see no reason to doubt this is the major motivator.  One variant of that is a bit earthier, but memorable – I remember overhearing a conversation between two boys in my 12th grade English class.  The gist of the conversation was that if you wanted to get laid by a hippy girl, the key was to wear a peace sign necklace – just 99 cents at a local store.  Cheap, easy social acceptance at work :)
Posted by Unknown at (permalink) 6:36 AM No comments: