It was a trenching experience...

It was a trenching experience...  With a lot of help from my friend and neighbor (Tim D.), we dug about 220 feet of 42 inch deep trench yesterday.  Tim is visible, along with his dogs, in the last photo below.  He worked in the trench, monitoring the depth (with the marked up piece of pipe to the left) and fine-finishing the bottom with a shovel.  I worked the backhoe to dig out the bulk of the soil.  Some of the areas we dug into were compacted clay, hard enough to pose a challenge for my little Kubota.  But we did it!

The first two photos show the electrical trench in the morning, before we got started.  The trench the tractor is working on is for the “primary side” of our barn's power connection.  Where I was standing when I took the first photo is approximately where the barn's transformer will be mounted.  Just barely visible, behind and to the right of the tractor, is the telephone pole we'll be connecting that transformer to.  The second trench crossing the first at an angle is leading between the barn and the house.  It will carry lines for natural gas, potable water, and network.  I'll be working on that trench once the electrical trench is finished.  For the second photo, I sat in the tractor's seat looking west to the barn.  The end of the trench is where the transformer will sit, about 12' from the service entrance on the barn.  There will be a short underground “secondary side” run there as well. 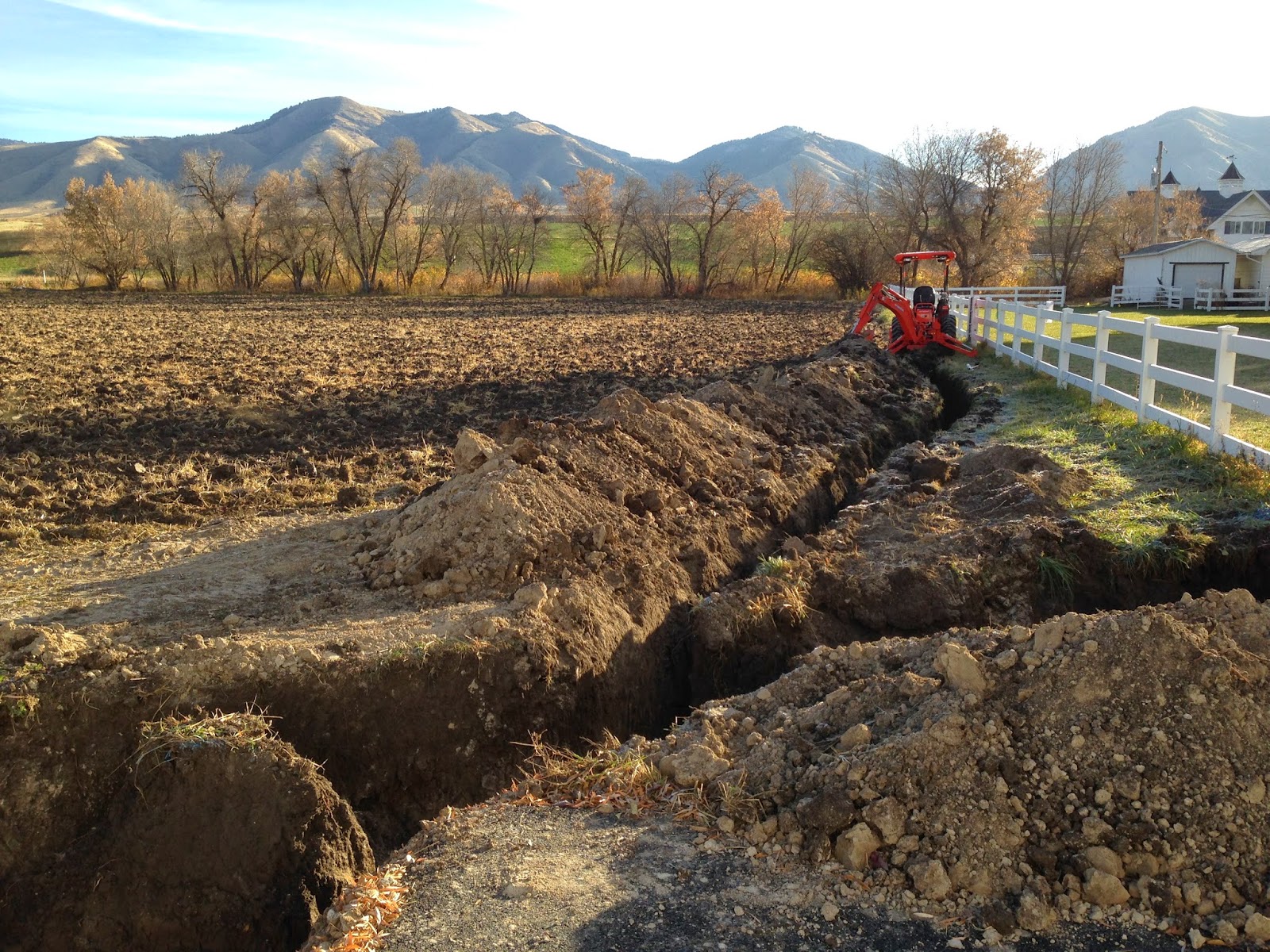 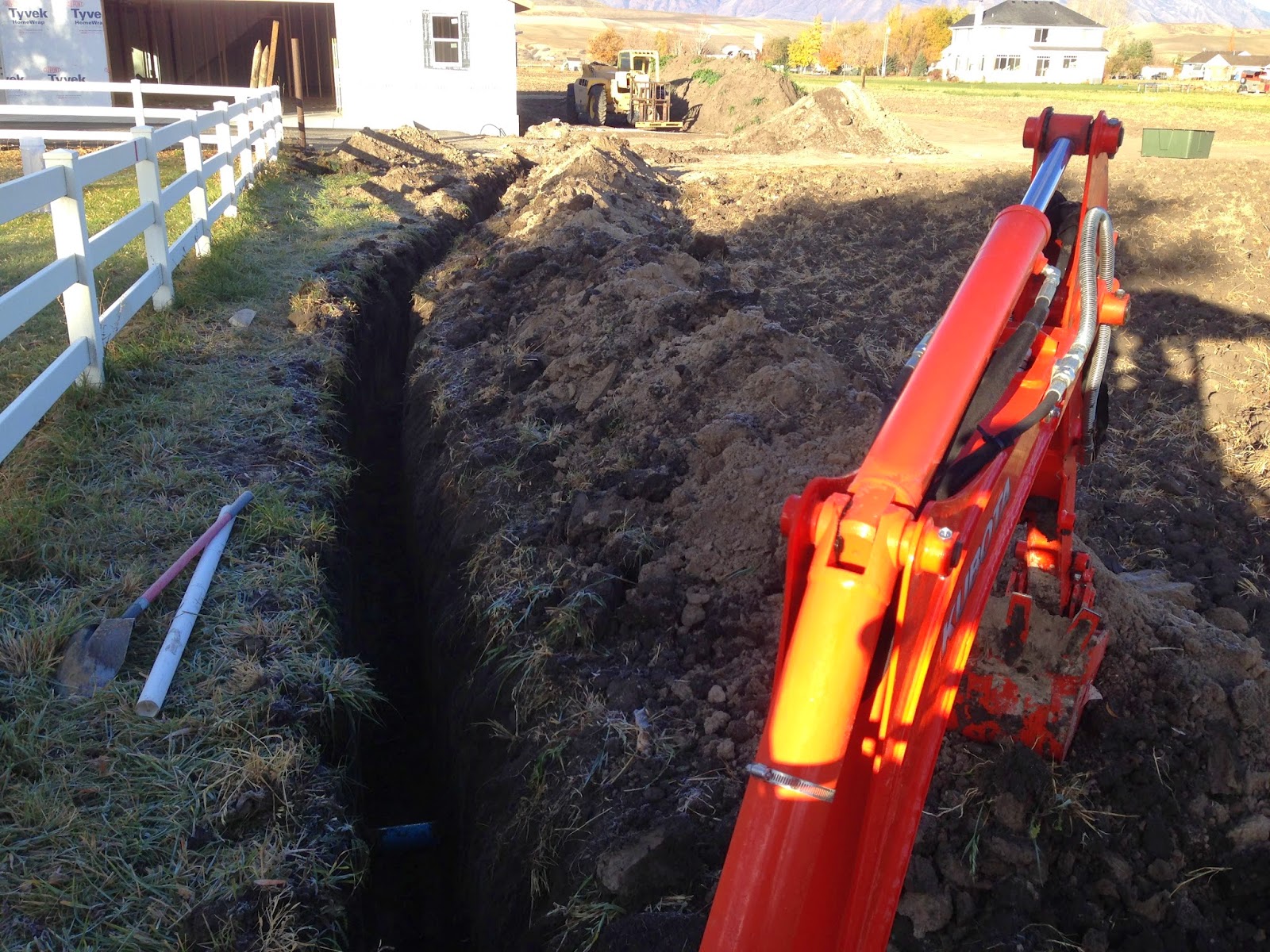 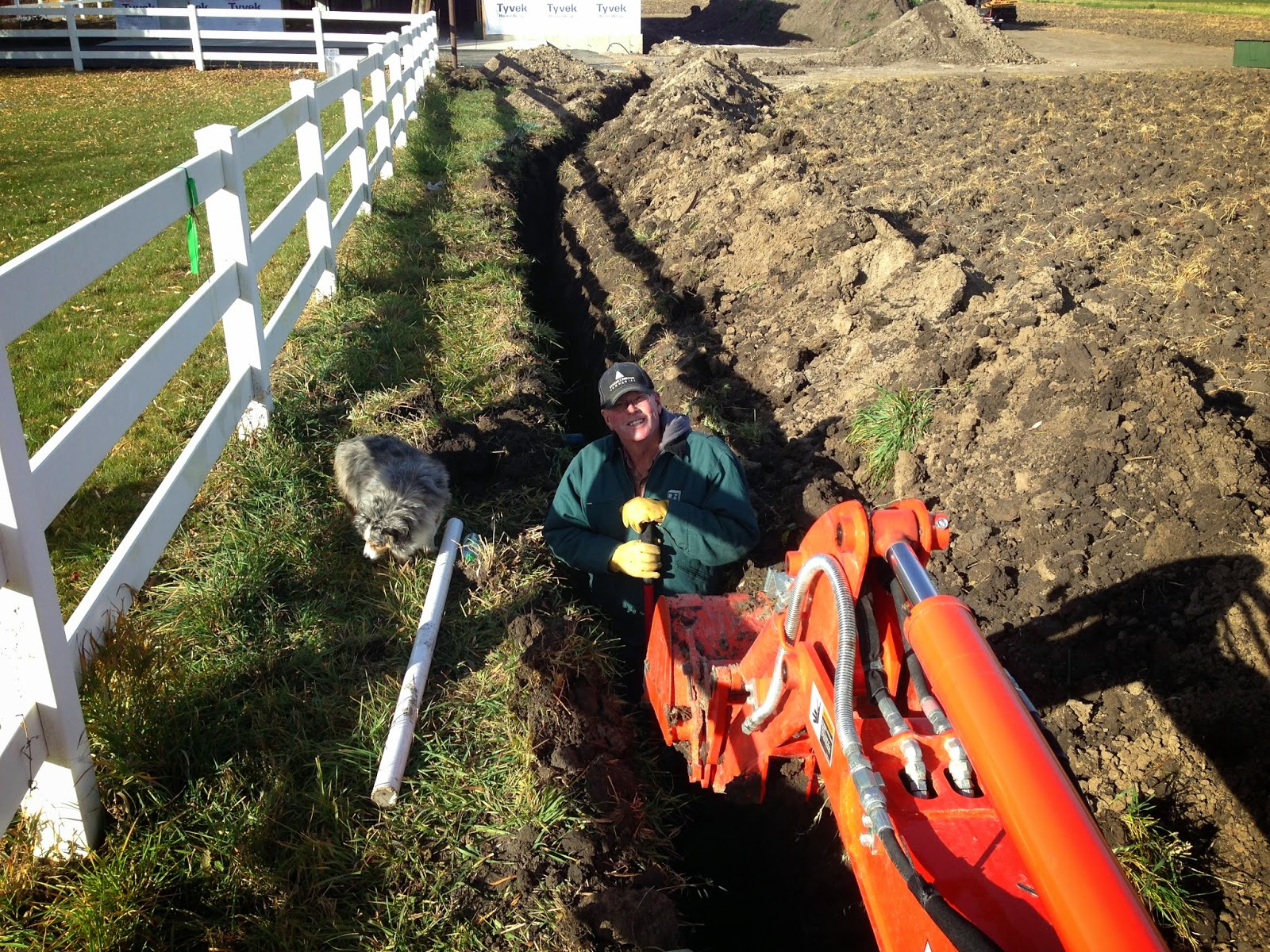 Schadenfreude recharge...  You're welcome!
Posted by Unknown at (permalink) 6:10 AM No comments: 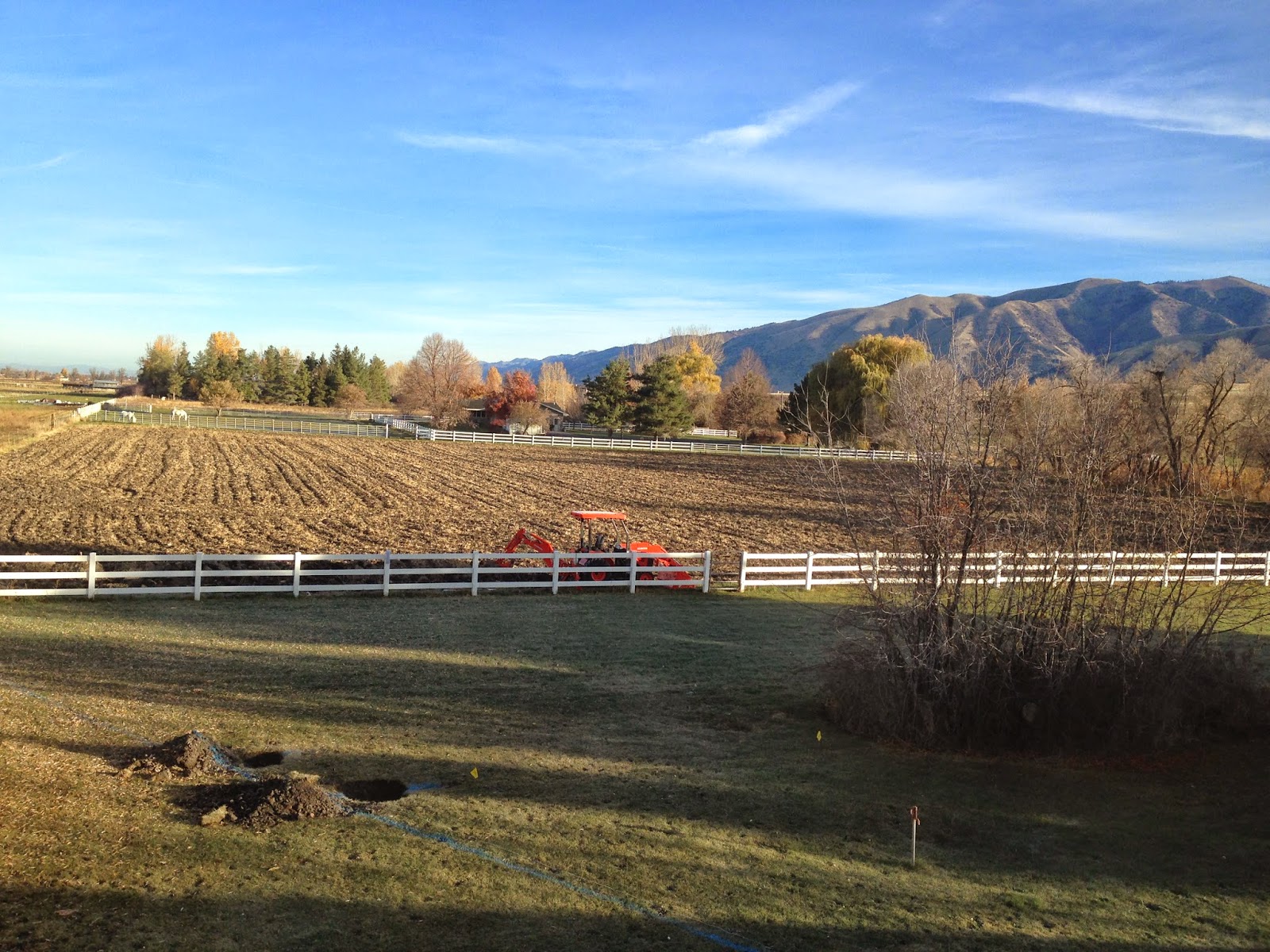 Yesterday morning in Paradise...  Winter is definitely approaching!  Note my tractor sitting out there, stopped where we finished trenching on Wednesday afternoon...
Posted by Unknown at (permalink) 6:07 AM No comments: Just a few more days ... until Philae attempts to land on Comet 67P.  At right is a photo of the surface (not the landing site) from a few days ago...
Posted by Unknown at (permalink) 6:03 AM No comments:

“This is no way to run a railroad.”

“This is no way to run a railroad.”  Peggy Noonan, on Obama's response to Tuesday's elections...
Posted by Unknown at (permalink) 5:35 AM No comments:

Lost in space...  A CalTech experiment has discovered evidence of something long expected: stars that are in the inter-galactic “voids” – the vast regions of not-quite-empty space between galaxies.  Computational models of star movement within galaxies shows that inevitably some stars will be thrown out of their galaxy, sometimes very energetically.  These individual stars, at long distances, don't emit enough light to be imaged.  The CalTech experiment appears to have discovered their cumulative glow.

When I first read about these orphaned stars, probably 30 or 40 years ago, the first thought I had was to imagine what inhabitants of a planet of such a star might think.  Their astronomers would be able to see all the stars that were parts of galaxies, but might not be able to see any other orphaned stars.  Until their astronomy advanced sufficiently (as ours apparently just has), they might well think they were unique.  A self-centered universe notion might survive for a long time there :)
Posted by Unknown at (permalink) 5:25 AM No comments:

You just can't make this stuff up...

You just can't make this stuff up...  The U.S. Supreme Court is going to decide whether throwing some fish overboard violates the Sarbanes-Oxley Act.  Seriously!
Posted by Unknown at (permalink) 5:19 AM No comments:

3D printed guns made practical?  Most 3D printers available today (especially at a price that ordinary people can afford) use some kind of thermoplastic material to make objects.  Guns made from plastic are challenging, to say the least – plastic just isn't strong enough to withstand the dynamic forces at play in containing an explosion, which is exactly what a gun does.

One enterprising fellow has come up with a possible solution to this: a special kind of bullet that essentially contains a “disposable barrel” in the shell (some of this ammunition is at right).  This is something that could easily be outlawed, but ... it also wouldn't take a sophisticated machine shop to make it, nor would it take a lot of skill.  An individual or group who badly wants to make a weapon is going to be able to do it this way, with parts, machines, and materials readily available today.

There's another approach I've read about that I suspect has even more promise in the long run: to create a gun-like weapon that uses tiny rockets instead of conventional ammunition.  By switching to a rocket, the need for a strong, heat-resistant barrel is eliminated.  The major disadvantage to using a rocket is accuracy – but that assumes that the rocket is unguided.  Off-the-shelf technology can be used to create a guided rocket today, though the cost is fairly high (over $100 a round).  But those costs are coming down very rapidly, for a host of reasons.  I'd bet that within 5 years one could make a 3D printable, guided-rocket weapon with ammunition that cost under $20 a round – and was deadly accurate to very long distances, and was capable of carrying incendiary or explosive warheads.

When such weapons are available to ordinary citizens, governments are going to have a much more difficult time imposing their will on an unhappy citizenry.  We're already seeing a bit of this at work, mainly in the Middle East.  There are many reports of social media (especially Twitter) being used to coordinate rebel military campaigns.  Drones you can buy from Amazon are being used by rebel forces for reconnaissance.  I've read two reports that those same drones have been equipped with small warheads and used as weapons.  Radio-controlled planes are being used by Hezbollah and the Syrian rebels, and probably others as well.

It's interesting to ponder what this development means in the long run.  I'm inclined to think that it's mainly bad for thugocracies (like the Assads in Syria), but good for democracies (because it will clarify the thinking of politicians if they know there is a limit to how much they can piss off the public).  Clearly, though – just like any other weapons – evil people will be eager to jump on these as new tools for their trade...
Posted by Unknown at (permalink) 5:11 AM No comments:

French graphics from WWI...  Not the old-school Victorian-era graphics, not art deco, but definitely modern looking.  If you know much about the history of WWI, you'll find many of these very evocative...
Posted by Unknown at (permalink) 4:47 AM No comments:

The tomb of Ghengis Khan...

The tomb of Ghengis Khan...  Researchers believe they have found it...
Posted by Unknown at (permalink) 4:44 AM No comments: