Product and company review: CAI Technologies water softener...  One of the things we needed to fix in our new home in Paradise, Utah was the water softener.  The old softener was leaking brine (ugh!) and also some of its resin beads were making it into the house water.  These beads clogged up basically every faucet and shower head in the house, greatly reducing the rate of water flow.  I had a plumber come out and inspect the old softener (a 24,000 grain single tank Aqua-Pure model), just in case it was something simple and inexpensive to fix.  It wasn't.

So ... it was time for me to start researching water softeners.  We have never owned a home that had one before, so I've never really had any idea how they worked.   The whole “add salt and your water gets better” part was a mystery to me.  Fortunately there are numerous excellent web sites that explain all this, and in a short while I actually understood how these things worked.  But I still didn't know which one I should get, and there are a bazillion choices.  My next tactic was to start reading water conditioning bulletin boards and blogs, and there are quite a few of them.  I quickly got to several concrete recommendations, based on the experience of quite a few installers.  The big ones:
Then I needed to choose a supplier.  After a lot of research on the bulletin boards and blogs, and also with Amazon's product reviews, I settled on CAI Technologies.  They have a reputation for solid products and good service, and they had a unit that was exactly what I was looking for.  I ordered it directly from them.

Three days later, UPS dropped off 7 or 8 boxes containing the parts and pieces of our new water softener.  I arranged for a local plumber to come out and install it a week later, and then I unpacked and inspected all the parts.  It all looked great – the right stuff and all looked well made – except that they had shipped me the wrong controller.  Dang.

Well, anyone can make a mistake.  What really matters is how they handled it.  I called CAI, and within 30 seconds I was connected to an actual tech – someone intimately familiar with their products and how they're used.  He had me do a couple of checks to verify my belief that I had the wrong controller.  I did.  Then he said the magic words:


“Well, we’re going to fix this right now.  We’ll ship you the right one by overnight express today, and we’ll arrange for a pickup of the wrong one.  Our apologies for screwing this up.  Let us know if there’s anything else we need to do to make this right.”

I can't ask for anything better than that.  CAI did exactly as promised.  The next day I had the right controller in my hands, and the day after that UPS picked up the old (wrong) one to return to them.  By the time the plumber arrived, I had all the right stuff.  He installed it, we tested it, and all looked good.

That was a week ago.  I've now gone through two startup regeneration cycles (manually initiated) and one automatic regeneration cycle (because we used enough water to consume the capacity of one of the tanks).  It works flawlessly.  I've tested the water before and after softening: before it's 23 grains/gallon (fairly hard), after it's 0 grains/gallon (perfectly soft).  There are no brine leaks, and no resin beads are escaping into our water supply.

Happy dogs (and cat)...  It involves large quantities of mutts, ocean, showers, sticks, and swimming – all down under.  Via my lovely bride...
Posted by Unknown at (permalink) 7:36 AM No comments:

Tattoo files ... of Russian criminals.  Interesting stories behind each of the tattoos...
Posted by Unknown at (permalink) 7:32 AM No comments: Valles Marineris (Mars)...  Via APOD, of course.  As always, click to embiggen...
Posted by Unknown at (permalink) 7:31 AM No comments:

Geek: large public datasets...  The list is longer than I expected...
Posted by Unknown at (permalink) 5:54 AM No comments:

Quantum random numbers generated on a mobile phone...  There's an app for that!
Posted by Unknown at (permalink) 5:53 AM No comments:

APIs can be copyrighted?

APIs can be copyrighted?  This strikes me as a strange court decision, one with lots of implications far beyond the software world.  Translated into the world of books, for example, this ruling would allow an author to copyright the characters and world characteristics in their novels – not just the novel itself.  For example, J.K. Rowling could copyright Harry Potter's world – and nobody else could write novels using them.  Last time I looked, there were several thousand novels and stories (most written by fans) using that world or derivatives of it.  If this ruling were applied to books, all of them would be copyright violators.

For the software world, this ruling, should it stand, will raise roadblocks for one of the fruitful paths for software innovation.  Like many other software engineers, I've personally reverse-engineered quite a few APIs so that I could write replacements that improved the original – making it more capable, faster, smaller, or sometimes just making it work correctly.  Had this ruling's logic been in place back then, I'd have been unable to do any of that.

I hope it's overturned.  More than that, though, I'd like to see our entire framework of intellectual property revisited, to take into account the realities of modern technology.  I'm not talking just about software here – music, visual art, and writing have all been impacted by modern technology.  Digital music and electronic book readers are familiar to us all, but even arts like painting and sculpture are seeing the impact of modern technology.  For example, one can now buy oil painting reproductions where even the brush strokes are robotically reproduced.  Even stone sculptures can now be precisely reproduced by large-scale 3D scanning and robotic sculptors.

The world, she's a-changing – and intellectual property law needs to change, too...
Posted by Unknown at (permalink) 5:51 AM No comments:

Three million for hot coffee...  Remember that famous lawsuit, in which a woman won a $3 million judgment against McDonald's for their overly hot coffee?  Most likely, just about everything you thought you knew about that case was wrong.

That case happened back in the early '90s, in the days when we were all completely dependent on mainstream media for our news.  It's a great example of the distortions produced by their quest for a sensational story.  I remember reading about this case in the Wall Street Journal, and even there I don't recall seeing the details in the article above.  Doing a little searching on the web today, I found multiple sources for the same information in the article I linked, dating back to 2009 when HBO started making a movie about the case.

I like our new world much better – without the mainstream media deciding which news I'm going to hear...
Posted by Unknown at (permalink) 5:32 AM No comments:

California leads the way ... in the flight to Mexico for medical care.  Why, you ask?  ObamaCare, of course...
Posted by Unknown at (permalink) 5:22 AM No comments:

The wuss subroutine...  Scott Adams cracks me up :) 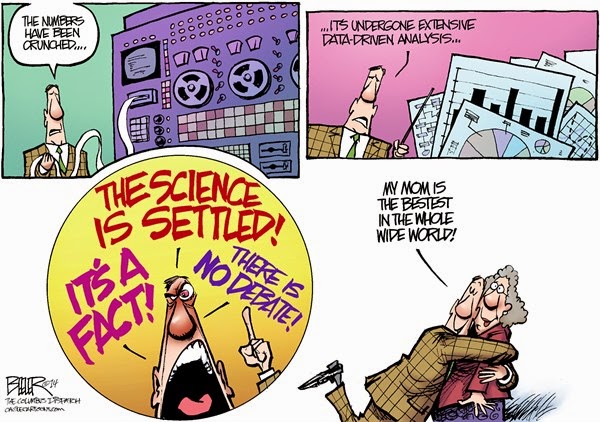 Posted by Unknown at (permalink) 5:06 AM No comments: