What a sandwich!  If you're hungry, you should be jealous of the sandwich I'm eating right now.  It's made on a bakery bun, asiago cheese and chive flavored.  There's beautiful rare roast beef, smoked gouda, perfectly ripe tomato slices, and Duke's mayonnaise.

It'll make your brains fall out!

Duke's mayo is a recent discovery of ours.  I've been using Hellmann's (or the western equivalent, Best Foods) for my whole life, and I'd never found the equal before.  Something I read online made me try Duke's, and ... it's better!  The only mayo I've ever had that beats it is my own homemade mayo, or (just twice) mayo made in a restaurant...
Posted by Unknown at (permalink) 10:22 AM No comments: 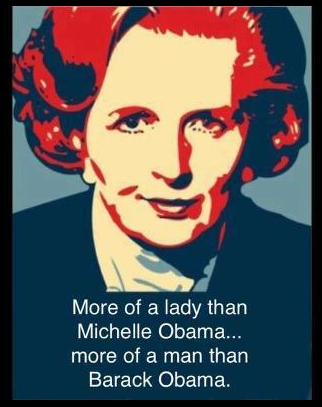 Margaret Thatcher...  Heh!
Posted by Unknown at (permalink) 6:52 AM No comments:

It looks like ObamaCare is here to stay...  The political will to repeal it is fading fast, as is the political will to significantly reform it.  Already, the number of voters who think of it as an entitlement is large enough to scare politicians.  I think the likelihood is that we will be living with it basically forever.

So what's that going to be like?  Megan McArdle looks at the issue, with sobriety.  Her conclusion:


Overall, I think that this is a real potential threat to the future of the insurance market. But as yet, it is only a highly speculative threat. We'll know more as the risk-adjustment programs begin to expire, insurers get more experience in setting rates, and states begin to publish more data on what insurers plan to charge.


Wheatgrass shots...  Sometimes when I'm in my beloved Jamba Juice to get my Mango-A-Go-Go smoothie I'll see someone ordering a wheatgrass shot, or even (gulp!) drinking one.  I want to run away whenever I see someone voluntarily ingest one of those disgusting cups of green glop, redolent with the aroma of fermented lawn clippings and possessing all the visual appeal of moldy vomit.

Most of the kids in the video seem to agree with me :)

Posted by Unknown at (permalink) 5:33 AM No comments:

CPU jitter for random number generation?  Here's an interesting paper that claims to present a method for generating random numbers by using the “jitter” caused by various elements of modern CPUs interacting in a complex operating system.  I skimmed the paper, concentrating on section 5, where the author discusses estimating the entropy of the system.  I'm afraid there's too much there that I don't understand for me to make any sort of judgment about the validity of the method.

What the author seems to be asserting is analogous to something anyone can relate to.  Imagine you're driving your car 10 miles in heavy traffic, partly on a highway and partly on city streets.  You can measure your average speed easily enough, and it will be reasonably consistent from one identical trip to another.  However, if you were to measure the instantaneous speed at thousands of points along the way, you'd find lots of variations from the average.  Sometimes a slowpoke in front of you will slow you down.  Sometimes fortune smiles upon you and there's a mile of open, car-free road in front of you.  As you maneuver through traffic, you'll momentarily speed up to pass someone, then slow down to slip back into the traffic pattern.  Similarly, your average direction is the same as that of the road, but there will be lots of momentary variations as you change lanes, bobble about in your lane, etc.  All those minor variations in speed and direction are – the author asserts – random.  There's no pattern to them, and there's no predicting them.  Also importantly, a bad guy can't disrupt the randomness.  These are all good characteristics of a quality random number generator.

Proving that those generated numbers are truly random is another kettle of fish, though.  I'm not sure they've done it.  The current system used by UNIX and a number of other operating systems (and cited in the paper) have been shown to be less than excellent under certain circumstances – most especially on server computers with solid state hard drives.  The problem, it seems, is that timing on such systems is more predictable than with devices that actually move.

Random is hard!
Posted by Unknown at (permalink) 5:25 AM No comments:

Progress in Paradise...  Well, I made that trip to Home Depot and picked up a gutter downspout extension.  That will stave off any more flooding in our basement's casement window until we have a more permanent solution.

Most of the rest of the day I spent replacing outlets and switches on our second floor.  This job had long been in the queue, but the imminent arrival (tomorrow!) of our first overnight guests (Jim and Michelle B.) bumped it to the front.  We don't want them sticking their fingers into an uncovered and miswired outlet and frying themselves!  That job is now done.

Debbie spent the day baking cookies – her trademark chocolate chip cookies with orange.  The house smelled quite delicious all day :)

We didn't end up getting much rain yesterday, and the forecast for today has been much reduced.  As I write this, the forecast now says 0.45", and the radar shows a few gentle rainclouds sidling toward us.  Even if we get no more rain at all, this storm was still wonderful for us.  Maybe we'll get some today...
Posted by Unknown at (permalink) 5:06 AM No comments: