Our builders did actually show up, and went right to work installing the new exterior door on our mud room.  That went ... not so well.  It turns out that the door with its glass arch over head is taller (by 5 1/2") than the opening they'd left for it.  That meant re-doing part of the framing on the front wall – and it also meant destroying some of the wiring I'd done.  Dang it!  That door is now installed, but I have yet to re-do the wiring.  They'll be back today to start working on the other three doors.

I made good progress on the fireplace doors.  The door itself is now mounted solidly to the fireplace.  The remaining work is all mortaring ... but quite a bit of mortaring will be required, as I have belatedly discovered that the front (vertical) surface of our fireplace is not flat.  Not even close!  There are some places where the fireplace door (which is very flat) is almost an inch from the masonry, while it's in direct contact with about 50% of the front surface.  I had to measure this about 10 times before I could believe it, but whoever built this fireplace really did manage to build a brick wall that wasn't straight – not even close.  The rock veneer we put in two years ago hides this completely.  Looking at it, you'd never know it was out of kilter – you really can only tell when you put a straightedge up against it.  It looks like the sort of thing where alcohol might have been involved. :) 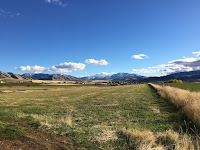 My brother Scott came down for a visit yesterday, mainly to get some help with his iPhone.  We took an hour for a nice little walk on a gorgeous autumn afternoon.  I took the puppies, and Scott (who had never walked dogs on a leash before) took our two much-better-behaved adult dogs.  It was still a hoot to watch him trying to manage the leashes!  He was very surprised by the pulling power of those two dogs – one can only imagine how he'd react to the puppies, each of which can out-pull the pair of adults!

I had a piece of exciting news yesterday afternoon: the Tesla Model X P100D that I ordered just over three years ago has finally been scheduled for production.  The photo at left is what mine should look like, according to their configuration tool.  I was beginning to wonder if I'd live long enough to actually see it! :)  I'm told that I should have it by the first week of December, and possibly a bit earlier.  We're all set up to charge that thing from our solar panels, except that we're in need of having an outlet installed.  The electricians should be here next week to do that work.  Woo hoo!
Posted by Unknown at (permalink) 6:23 AM No comments: