On August 5th of this year, at 10:31 PDT, the Curiosity Rover is scheduled to plop down onto the surface of Mars.  It is by far the most advanced probe anybody has ever attempted to land on any planet, and (assuming it lands successfully) we expect it to produce great science data at least through its primary mission.

Curiosity is also the biggest and heaviest probe anyone has ever attempted to land on Mars, and this meant some tough engineering problems to solve.  The engineering solution involves an advanced ablative heat shield, the largest supersonic parachute ever designed, a rocket-powered sky crane, high resolution descent radar, and a completely autonomous computer-controlled landing system.  Every bit of this has to work perfectly, or the Curiosity landing will fail (as so many previous Mars landings have failed).  For those of us who, like me, are more excited about robotic probes like Curiosity than we are of the manned space program, this landing is real edge-of-the-chair stuff.  It's also a spectacular feat of engineering in its own right, completely aside from the rover itself.

The video below is a sort of mini-documentary, very nicely done, about the technology developed to set Curiosity down on the surface of Mars...

Ann Althouse (one of my favorite bloggers) does a spectacular takedown of Jonathan Turley's proposal to pack the Supreme Court (a la FDR).  It's a thing of beauty, her takedown – one imagines Turley's ego lying shredded on the floor...
Posted by Unknown at (permalink) 6:12 AM 1 comment:

The Care and Feeding of Software Engineers...

Lots of truthiness in here...
Posted by Unknown at (permalink) 6:09 AM No comments:

Here's a big collection of contemporary political jokes, mostly about either Obama or Romney.  Some of these are as likely to make me cry as laugh.  The most interesting thing to me – Obama is getting the same treatment as Romney from the humorists.  No more “hands-off” attitude.  I guess there's just too much comedic gold for them there...
Posted by Unknown at (permalink) 6:04 AM No comments:

Watch the human powered helicopter below stay aloft for 50 seconds.  Awesome!  The Sikorsky Prize ($250,000) has remained unwon for 30 years.  One of the three requirements is staying aloft for 60 seconds or more.  They're getting very close on that front!  Another requirement is reaching 3 meters (almost 10 feet) high; they've got a ways to go on that...

Posted by Unknown at (permalink) 6:00 AM No comments:

Scott Adams (of Dilbert fame) has some thoughts on how one becomes a citizen of any particular country.  He doesn't really propose any solutions, but makes some unusual observations and a few predictions.  I found myself agreeing with many of his observations, in particular the arbitrary and capricious nature of “place of birth” as the determinant...
Posted by Unknown at (permalink) 5:55 AM No comments:

It's a great one below, and there's another where that one came from.  I love illusions like this one that demonstrate so clearly the major role our brains have in visual perception... 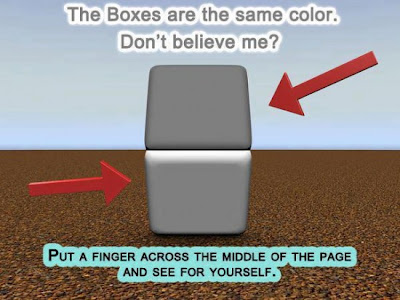 This is the first ever MRI “movie” of a human birth.  It's just 25 seconds long, and is comprised (really) of a series of still images from the MRI, all strung together to make a movie.  There's much more about this here.