Taken Out the Plane Window... 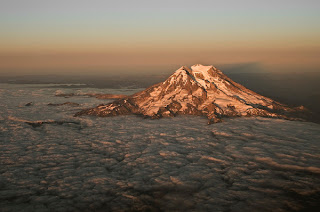 I didn't take this picture, or any of the 100 out-the-plane-window pictures you'll find in this collection.  I have, however, been to quite a few of those places and seen very similar sights.  The photo of Mt. Ranier at right (note the shadow of the mountain in the clouds), and of the salt ponds in San Francisco Bay that appears in the linked collection, are both things I've seen many times.  Some of these photos are remarkably good considering the usually dirty, scratched, dual-pane windows they were taken through...
Posted by Unknown at (permalink) 8:37 AM No comments:

At JFK airport in New York, this past week, TSA agents strip-searched a ticketed passenger going through security.

Why? Because the passenger didn't want to go through the X-ray equipment, fearing that it might interfere with her defibrillator.  The usual alternative is a pat-down search (something I've had done myself), but in her case, they opted for a strip search.

Why?  That's a bit unclear, as the passenger didn't fit any threat profile I've ever heard of: she's white, 85 years old, weighs 107 pounds, and uses a walker.

Somehow in the process of doing the humiliating strip search, they managed to injure her as well.

The only reason the TSA would strip-search a passenger like that is in their eagerness to avoid “profiling”.  In an all-too-familiar example of the triumph of multi-culturalist political correctness over common sense, our TSA has decided that we cannot recognize the rather clear fact that terrorists seem to be overwhelmingly (1) Muslim, (2) young men, and (3) Middle Eastern.  Not that there aren't exceptions (though I'm pretty certain that 85 year old Caucasian women are not amongst them), but the preponderance of terrorists do, in fact, fit this profile.  There, I did it: I used the politically-incorrect word.

The good news: Europe, where our “elites” get their cues, seems to have figured out that the multi-culti movement has been a disaster for them.  The first steps to reversing the ravages of multi-culti are underway.  If they can avoid a new Nazi takeover as the pendulum swings the other way, even our “progressives” will wake up and start singing a different, politically-incorrect song.

I can hardly wait!
Posted by Unknown at (permalink) 8:17 AM No comments:

A thought-provoking piece by Ken Murray, a retired M.D.  The assertions he makes will be a topic the next time I meet with my doctor; I'd like to know whether he agrees with them.  From our own experiences with our animals at the ends of their lives, I find this entirely plausible.  The intro:


Years ago, Charlie, a highly respected orthopedist and a mentor of mine, found a lump in his stomach. He had a surgeon explore the area, and the diagnosis was pancreatic cancer. This surgeon was one of the best in the country. He had even invented a new procedure for this exact cancer that could triple a patient’s five-year-survival odds—from 5 percent to 15 percent—albeit with a poor quality of life. Charlie was uninterested. He went home the next day, closed his practice, and never set foot in a hospital again. He focused on spending time with family and feeling as good as possible. Several months later, he died at home. He got no chemotherapy, radiation, or surgical treatment. Medicare didn’t spend much on him. It’s not a frequent topic of discussion, but doctors die, too. And they don’t die like the rest of us. What’s unusual about them is not how much treatment they get compared to most Americans, but how little. For all the time they spend fending off the deaths of others, they tend to be fairly serene when faced with death themselves. They know exactly what is going to happen, they know the choices, and they generally have access to any sort of medical care they could want. But they go gently.

Posted by Unknown at (permalink) 8:04 AM No comments:

Gorgeous astrophotography of a mystery event.  In 2002, the star V838 Mon suddenly brightened to about a million times as bright as our sun (becoming, briefly, the brightest star in the entire Milky Way galaxy).  Just as suddenly, a month or so later, it rapidly dimmed.  The curve of its luminosity over time is unlike any other event astronomers have ever recorded, and there's a great debate and investigation into what the mechanism might have been.

For almost 10 years, that pulse of light (or flash) has been expanding outward from V838 Mon, illuminating an ever-expanding light-month thick “bubble” of interstellar gas and dust.  The Hubble telescope took the photo below in February 2004.  The accompanying description says the bubble at that point is about 6 light-years in diameter, but I think that must be mistaken – it should be 4 light-years in diameter at that point.  Via APOD, of course. 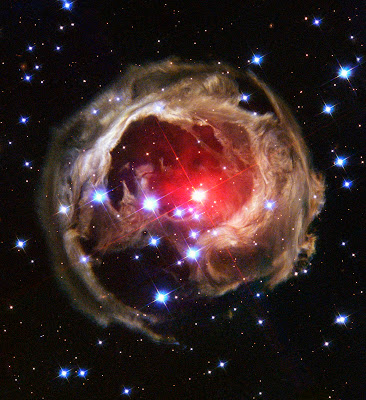 Posted by Unknown at (permalink) 7:46 AM No comments:

Reading today's Day-by-Day cartoon strip, you definitely get the feeling that Obama is not a President that cartoonist Chris Muir looks up to.  An excerpt from the character's dialog:


The massive corruption, the transfer of our wealth to themselves and their cronies, the endless vacations, golf trips, parties, a private jet for their dog, the sheer hypocrisy of it all! Clinton at least pretended there was any kind of law, but Obama truly is the example of the self-stroking ego of the boomers.